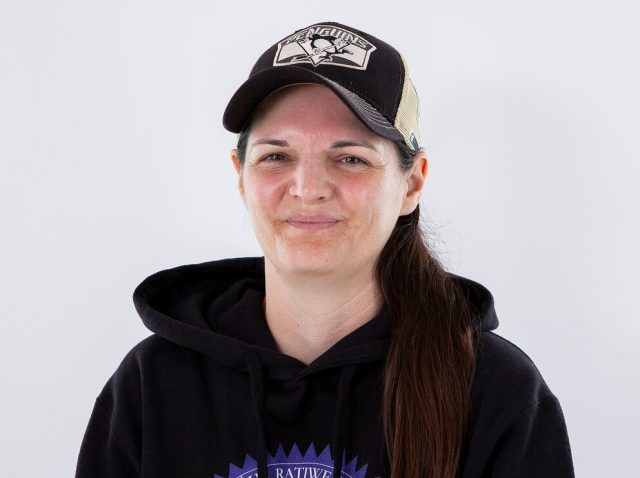 Kahsennenhawi Kirby remembers her embarrassment whenever an elder would ask her a question in Kanien’kéha, and these words would fall from her mouth.

Kirby’s grandmother, Rita Phillips, was a first-language speaker who worked hard to fortify Kanien’kéha in the community, even writing curricula for local schools.

“She gave me my name. She taught me Mohawk right from when I was born,” Kirby said.

The future looked bright for Kirby as a speaker. She attended Kanien’kéha immersion school as a young child at Karonhianónhnha Tsi Ionterihwaienstáhkhwa.

As has happened to so many in the community, however, English eclipsed Kirby’s burgeoning knowledge of Kanien’kéha, leaving it to wither in shadow.

Her sister, Konwatsitsawi Phillips, long ago made the decision to reverse this trend in herself and centre Kanien’kéha in her life, enrolling in the Kanien’kéha Ratiwennahní:rats Adult Immersion Program as part of its first cohort in the early 2000s.

“Growing up, I always looked up to my sister because she was two years older than me,” Kirby said.

Kirby, the mother of a 13-year-old, set a goal to be rooted in her own language-learning journey by her 40th birthday. So, she enrolled in the Kanien’kéha Ratiwennahní:rats program.

“Being a single mom and studying at night and helping (my son) with his work, or just getting up every day to go to school – it is hard,” she said.

Finances were a challenge. Students receive a stipend, but it’s not much, so Kirby counted herself lucky when she had the chance to take a job at Kanien’kehá:ka Onkwawén:na Raotitióhkwa Language and Cultural Center’s photography archives.

The work can be done around her school schedule and complements her language learning. Kirby found a second passion in speaking to community members and preserving their photos as part of Kahnawake history.

“I could see myself staying there forever, and I’m good with that,” she said.

Due to the pandemic, the program unfolded differently than it has for other cohorts, extending the program’s length and limiting opportunities to engage with first-language speakers. However, after nearly three years, her studies are on the cusp of completion.

Kirby will graduate from the Kanien’kéha Ratiwennahní:rats program on June 8, one day before her 40th birthday.

“She is very determined when she sets her mind to something,” said Phillips. “… I am extremely proud of her for taking the language program, and even more proud of her for sticking with it through such a rough time as well.”

Phillips encouraged Kirby’s studies by asking her to play the sickly lung of a smoker for an all-Kanien’kéha skit on K1037 radio. Phillips was in character as Tóta.

“It was such a great experience to work with her in that capacity,” Phillips said. “She was nervous at first, but the episode came out great. She was a natural in front of a microphone.”

“To do that with my sister, it was so cool. My mom was so proud,” said Kirby.

Phillips describes her sister as someone who makes friends easily, and this is exactly what happened in the language program.

Kirby remembers her classmates confiding in one another about the difficulties of the program, exchanging late-night text messages as they struggled through homework together.

“It’s a good support system, and I know after the program, we’ll stay friends,” Kirby said. “We’ll stay there for each other on this journey of language learning.”

For Kirby, the effect on her life has been transformational. She describes the program as a stepping stone to a lifetime of learning.

“You see people go in not knowing what to expect. They come out, and they know more about themselves, more about their culture,” Kirby said of the program.

Losing identity and finding it again through language