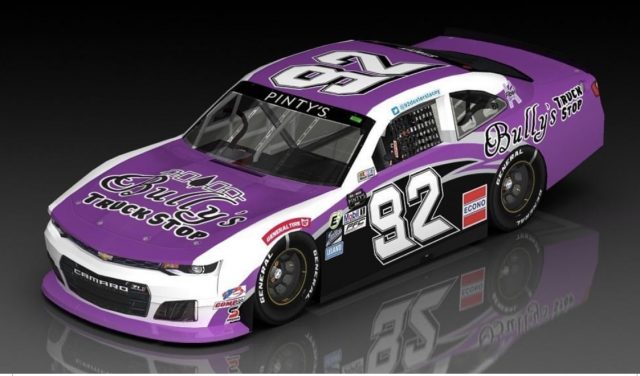 Kahnawake’s father-son racing duo kicked off at their first race of the 2022 NASCAR Pinty’s Series season with son Dexter Stacey suffering a crash and his father Wallace ‘Bully’ Stacey finishing in 16 place – a new personal record.

“We had a very good year (last year), but this year, we started off not so well,” said Dexter on the NTN Ultimate Bearing Experience 250 race on May 14.

He was taken out on lap 145 of 250 in the competition after being bumped in the rear by a competitor and subsequently being hit by another driver into the left front end wheel, which caused severe damage and made it impossible for him to continue.

However, the outcome at Sunset Speedway in Innisfil, Ontario over the weekend has not phased Dexter.

“It’s racing, it can happen. Anytime. Any minute,” he said about the crash, which left him ranking 18 out of the 20 cars for the race.

While his #19 Bully’s Truck Stop Chevrolet is undergoing repairs, Dexter had no major injuries, only soreness in his arm from the shock of the hit through the steering wheel.

With NASCAR Pinty’s Series 2022 spanning 13 races at 12 different tracks, the Staceys will return to the racetracks this Saturday at the Canadian Tire Motorsports Park in Bowmanville, Ontario. Fans can view the race at 1:30 p.m. on the TSN website or app.

The Staceys are part of a four-person team under the Ed Hakonson Racing/Team 3 Red banner (T3R/EHR Team), who work out of the same garage but compete separately. Bully, who rides the #66 Bully’s Truck Stop Camaro, sponsors both his races and his son Dexter’s.

“It was cool to watch him actually make a couple of turns before I caught him and stuff like that. So it’s pretty neat,” said Dexter on racing with his father. “I gotta watch I don’t take out my sponsor at the same time,” he joked.

The team is looking to recover their loss and reach the top 10 rankings of the race, either collectively or individually.

The Pinty’s season will take the Staceys to British Columbia and Saskatchewan in the upcoming weeks to race on oval courses featuring different arrangements of dirt and road course.

The family’s racing has become an inspiration to younger Kanien’kehá:ka, who Dexter notices have started coming out in greater numbers for community ice racing competitions near the marina.

“We use almost everyday cars like we buy a Honda Civic and throw them on the ice, or older cars and just put them on the ice and go,” said Dexter, who started ice racing when he was 14.

“But now seeing the younger generation coming up,” he said, “I’m hoping that more people can do it.”

For him, the ice racing skills he’s gained transfer onto the professional track.

“Sometimes on the road courses we have to race in the rain, and then during that, the ice racing comes as a big help because we have to drift around most of the turns.”

Kirk Stacey, Dexter’s uncle, has worn many hats for his nephew by being his spotter, tire carrier, and later a crew chief for a few games early in his career.

When his nephew and children were younger and racing soapbox derby, Dexter was eager to start, but there was one catch – he was too young. Dexter, 29, was six at the time, and would have to be eight to drive.

But when his uncle noticed his nephew was capable of handling the soapbox car, he taught the eager young driver to get around that.

Shortly after, Bully enrolled him in Go-Karting, where he excelled.

Dexter was only 16 when he started in the NASCAR Canadian Tire series with his father.

“A friend of mine once told me, the craziest thing is on the weekend you see him on the track racing a car, and Monday morning you see him get on a bus to go to school,” said Kirk. “At a young age, when he was 16 when we went to the races, all the young kids idolized him.”

As the T3R/EHR Team head into the races this upcoming week, Dexter says they have their eye on moving up the ranks.

“They’re going to work harder this week. And make sure everything’s better than what it was,” said Dexter about his next race tomorrow.