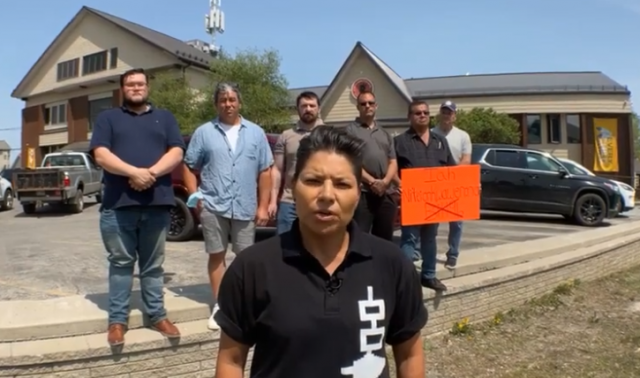 A sense of urgency is swelling in Kahnawake as leaders and residents scramble to find ways to compel the government to change course on Bill 96, a sweeping French language bill that has ignited local outrage.

The bill is likely to pass tomorrow with no exemptions for Indigenous people in Quebec, despite weeks of Indigenous voices sounding the alarm about the bill’s far-reaching effects and a lack of consultation.

To many Kahnawa’kehró:non, the bill is unacceptable not only for its impacts to education, business, and healthcare but also because they view it as an affront to the rights and autonomy of Indigenous Peoples, who are once again being relegated to the margins of decision-making on a crucial issue of identity.

A week ago, Sky-Deer and other Indigenous leaders were granted a virtual meeting with two Quebec ministers, but a flicker of optimism was snuffed out when the government came with no concessions, instead arguing that Indigenous communities had misunderstood the bill.

On Tuesday, a letter reiterating the government’s position was sent to the MCK by Simon Jolin-Barrette, the minister responsible for the French language, who was present at the May 13 meeting.

“They continue to disregard our concerns and are not taking us seriously,” said Delisle.

The letter was received as community members were meeting to discuss next steps.

Over the weekend, a youth-led demonstration slowed traffic on the Mercier Bridge, stopping just shy of a blockade as pamphlets were handed out to passing cars. Organizers planned to halt traffic for up to 20 minutes.

“I didn’t know if the community would support (the protest) or not,” said Teiotsatonteh Diabo, 19, a KSS alum.

She was involved in planning the demonstration and pitched it to the community at Tuesday’s meeting, where she found widespread support.

“It was very nerve-racking, but I understood our voices and concerns needed to be heard,” she said.

Diabo, who is set to attend Dawson College in the fall, got involved when community discussions about next steps around two weeks ago left her dissatisfied.

“I left very frustrated. I understood the severity of this bill,” said Diabo.

Since then, she and others have recruited more young people to the cause. While the protest is youth-led, all community members were invited to gather at KSS before departing for the Mercier Bridge to disseminate information.

“We are definitely in support of any kind of movement, any kind of activity that would bring more awareness,” said Falen Iakowennaié:was Jacobs, associate director of education at the Kahnawake Education Center.

“I think it’s really a great initiative on behalf of the youth for wanting to stand up for their rights in a peaceful, respectful way, and handing out information to surrounding community members about our perspective and our fight against Bill 96.”

According to Delisle, the core demand has evolved from an exemption or carve-out for Indigenous communities – something Sky-Deer was advocating last week – to the complete withdrawal of the bill.

“I’m quoting people from the meeting (Tuesday) stating this is the community position, that the bill should not pass,” said Delisle.

While he acknowledges this may not be a likely outcome, he knows what the government can expect if Bill 96 passes without an exemption: “A very rough summer,” he said.

“This isn’t going away.”

Delisle believes Bill 96 is poisoning the well in terms of other important discussions happening with the province.

“How can we negotiate on other issues when you don’t take our concerns seriously on a fundamental issue of human rights being alienated across the province,” he said.

“On all fronts, in other matters, they kind of have the same thinking that whatever they do is for all Quebecers, including our Peoples,” said Assembly of First Nations Quebec-Labrador (AFNQL) regional chief Ghislain Picard, who attended last week’s meeting with the ministers.

“They seem to be consulting our Peoples strictly based on what they define as consultations for them, which is far off from the way that it’s been defined through the Supreme Court decisions,” he argued. “To me, it’s another example of the ideology of this government and their continued denial of the capacity of our communities to exercise what they feel is their own jurisdiction.”

AFNQL staff is currently exploring the feasibility of a legal challenge if the bill passes.

Regardless of the finding, Picard does not expect the bill’s passage to mark the end of the fight.

“There are too many of our communities being impacted. There is strong mobilization in Kahnawake and other communities,” he said.

Despite the signs that this agitation could explode into widescale disruption, the government continues to insist on business as usual.

“We would like to reiterate that the government cares deeply about the success and well-being of Indigenous youth,” said Myrian Marotte, a spokesperson for Ian Lafrenière, who attended the May 13 meeting in his capacity as minister responsible for Indigenous affairs.

“Furthermore, in November, we announced an investment of nearly $20 million to help Indigenous students succeed and stay in school,” she continued. “The government is committed to continuing such efforts and working with Indigenous nations to find concrete solutions to their problems. However, Bill 96 is not the right vehicle to address these issues.”

Amendments to Bill 96 to exempt Indigenous people in the province from language requirements have been proposed by the political opposition but have been rejected by the ruling Coalition Avenir Quebec (CAQ) party.

“This position of the government is a shame,” said Ruba Ghazal, Quebec solidaire member of the National Assembly (MNA) for Mercier.

“It’s important to talk about Bill 96 in this general context, where all the demands of Indigenous people are refused by this government, and it’s a shame.”

While her own party plans to vote for the bill despite objections about its applicability to Indigenous communities, Ghazal stressed that the fight need not stop when the bill passes since exemptions could be granted in a separate law.

In the meantime, Kahnawa’kehró:non are currently meeting nightly at the greenspace by the Golden Age Club to receive updates and discuss strategies, some of which cannot yet be named publicly, according to Delisle.

“In my opinion, it’ll probably escalate as this piece of possible or probable legislation continues to their date of May 24,” he said.