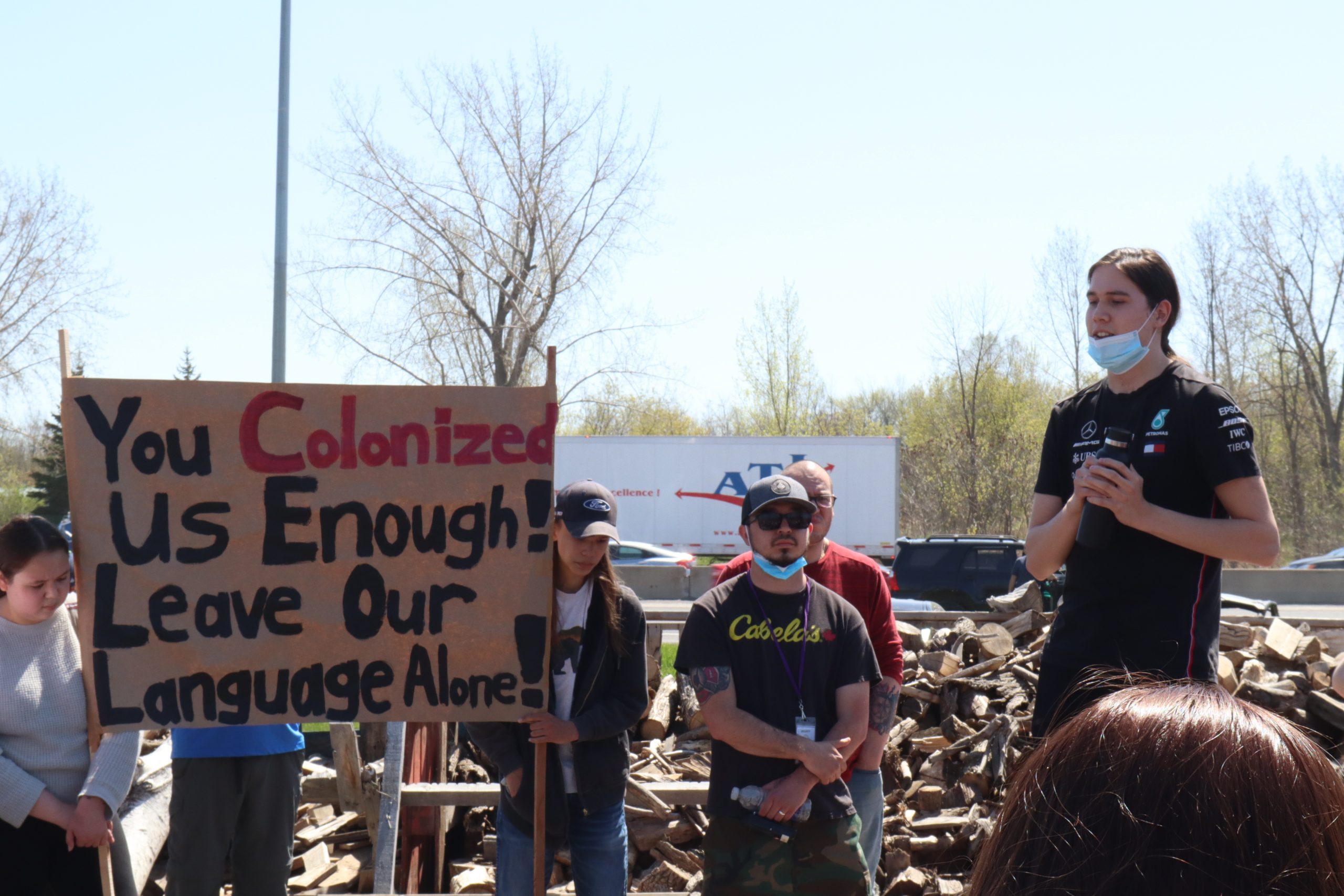 Students and staff at Kahnawake Survival School (KSS) were joined by hundreds of community members last week in walking out against Bill 96, a far-reaching French language bill on the verge of becoming Quebec law.

In a shot across the bow, about 1,000 Kahnawa’kehró:non marched west on Route 132 from KSS, blocking traffic on their way to the green space near the Mercier Bridge.

On May 12, Mohawk Council of Kahnawake (MCK) grand chief Kahsennenhawe Sky-Deer announced that she was contacted by Quebec’s Indigenous Affairs minister Ian Lafrenière to ask for a meeting also be attended by Simon Jolin-Barrette, the French language minister and a driving force behind Bill 96.

Sky-Deer credited the KSS walkout for the change of heart after pleas to the government on this issue went unheard.

“When Kahnawake takes action, people tend to pay attention, and that’s exactly what we wanted,” she said. She said a total exemption – applying both inside and outside Kahnawake – is the only acceptable solution.

“For the whole community to rally behind the students, it spoke volumes in terms of our ability as a community to pull together, to stand united against a common threat,” Sky-Deer said.

She compared the action to a walkout by Kahnawake students at Howard S. Billings High School in Chateauguay more than 40 years ago in opposition to Bill 101. KSS was founded in 1978 in protest of the implementation of that generational language law.

Sky-Deer could not attend the May 10 march, instead taking part in a press conference against the bill at the National Assembly in Quebec City with the Assembly of First Nations Quebec-Labrador (AFNQL).

“For me, this is the 11th hour, if not beyond that, of this bill passing,” Sky-Deer warned.

Bill 96, intended to fortify French as the language of Quebec in the face of perceived erosion, is best known for its impacts to education, including new mandatory French courses and a cap on enrollment at English CEGEPs.

Educators fear the rules could hamper the competitiveness of local youth who already face barriers to success.

To many community members, the bill is just the latest example of colonial overreach by an external government shameless in its impulse to dominate Indigenous communities. They worry the bill could marginalize efforts to revive Kanien’kéha as the community’s primary language after decades of systematic erasure.

“For the Quebec government to think they’re going to come in here and tell us what to do, it simply ain’t going to happen,” said MCK chief Ryan Montour over a cacophony of horns, some from frustrated drivers behind the march, others booming from supportive truckers heading east.

“It’s about getting our message across that we will not stand for having laws imposed upon us that will greatly affect our existence and our perseverance as a nation and our inherent rights,” said Falen Iakowennaié:was Jacobs, associate director of education at the Kahnawake Education Center (KEC).

The Kanien’kehá:ka Nation at Kahnawake raised similar objections in a statement released Monday outlining the curtailment of Kanien’kéha since 1915 when education in Kahnawake was transferred by the government to a Catholic entity that prohibited the use of Kanien’kéha.

“From one colonial regime to another, settler governments have constantly and consistently interfered with our national affairs and have endeavoured to extinguish our rights as Onkwehón:we people,” the statement read.

At a community meeting before the walkout, a range of community organizations in Kahnawake sounded the alarm about the bill’s broader impacts, which extend beyond education to domains such as healthcare.

“Existing barriers such as systemic racism, communication barriers, (and) language barriers coupled with the increased obstacles this bill will create will decrease our community members’ (access to) the care they need when they need it,” read the statement.

Despite the range of impacts, it was decided at the Monday meeting that students should be given a chance to step into the forefront of community action on a bill that could affect them the most.

“It was a hard walk,” said Cash Rice-Rossetti, a KSS student who took the megaphone at the green space. “It was hot, and I had to carry a heavy bag with me the whole time, but it was for a reason, and I am proud that I made it here.”

He believes people need to listen to students on this issue.

“I feel it’s very, very important that we as young people strive to voice our opinions on these matters,” agreed Sakoianonhaiwi Curotte, who also gave a speech outlining his opposition.

“It shouldn’t be allowed.”

Louis Beauvais, a grade 10 student, was motivated to march by a desire to show the Quebec government that it can’t run roughshod over Indigenous communities anymore.

“They should consult us next time they want to try something like this,” he said. “I hope that it doesn’t go through,” he said. “That we don’t have to block a bridge or something.”

Katsitsiio Splicer, who works at Skátne Ionkwaweientehta’onhátie, a grassroots, youth-centred language and cultural organization, knows firsthand how seriously youth take issues of identity, something she felt was on display at the protest.

“They’re super strong and resilient, and they know how important our language and culture are to us as individuals and as a community and as a nation,” she said.

Splicer recently enrolled in the two-year Kanien’kéha Ratiwennahní:rats Adult Immersion Program – two years of her life that she has to dedicate to learning her own language, she pointed out.

She believes the community is waking up to the broad impacts this bill could have.

“In the news, they’re portraying it as just affecting CEGEPs and students, but in reality, the impact is going to be much greater than that,” she said. “Once the community found out, we knew we had to take a stance right away and have it be known we’re in opposition to this bill.”

Kristy Kennedy, a mother of three, walked a stroller beside her ninth-grade son to show support for the cause. She believes the bill could have a profound effect on her children’s future.

“For them to be successful in life, to raise their kids, their next generations, I think it’s really important that they have a voice and that they’re heard, to stop the bill,” she said.

“We’re Indigenous,” said Kennedy. “We were here first, and it’s our land, and we should be able to communicate in the language that we want.”

The great meat pie debate rages on and on…

Gilbert goes from law to school to lawyer to judge