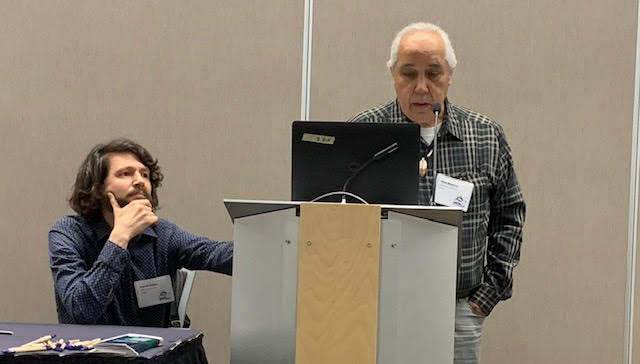 Montour delivered a presentation at the conference, which ran from May 4-7, where he addressed the cumulative impacts that the St. Lawrence Seaway project has had on the community since its completion in 1959.

“That amount of time has seen an awful lot of environmental impact,” Montour said about the period since the Seaway was built, noting changes in water quality and the effect on two generations of Kahnawa’kehró:non who have grown up without firsthand experiences living along the river.

“There is a strong sentiment in Kahnawake about ‘Not one more inch.’”

Since taking office in 2019, Montour has experienced firsthand resistance from the Quebec leadership when attempting to flag risks with their development projects.

“A lot of times, we’re interfacing with the MELCC (Ministry of the Environment and the Fight Against Climate Change), which is the environment ministry of Quebec. They seem to be in the business of authorizing projects rather than really seriously looking after environmental concerns,” said Montour.

The challenges MCK chiefs face when negotiating with Quebec come down to recognition. “They do not even recognize that we have an inherent right to self-determination.” Montour continued. “They say that they exercise and assert sovereignty over all lands within the territorial constructs of the province of Quebec.”

These challenging relations have motivated his participation at the conference, along with Patrick Ragaz of the Kahnawake Environment Protection Office (KEPO) and Francis Walsh, an MCK lawyer.

“What we bring back to the community is an increase in our knowledge and our ability to advocate for environmental concerns when it comes to the duty to consult,” said Montour. “In terms of how you make a decision, you need to take into consideration all those things: environment, peace, and faces yet to come.”

Kahnawa’kehró:non Morgan Phillips, a research consultant in Indigenous education, health, and wellness, also attended the conference to present her research findings on the cumulative impacts that the seaway has had on the health and wellness of Indigenous communities along the river.

“We’ve been collecting data in the community here, speaking to different people about life on the river before the seaway, and the impacts, the sociocultural and health and wellness impacts that our people have endured since the seaway began construction,” said Phillips.

The project, called St. Lawrence Cultures & Nations, is ongoing; however, Phillips anticipates that the interview stage will end this year. Afterwards, her team will work to bring the research findings back to the community. This could look like story mapping, Phillips suggested.

“You could create a curriculum. It depends on what the community wants.”

The strength of this conference comes from its bringing together people from around the world, according to IAIA president Marla Orenstein, who noted that guests from 63 countries attended this year, and between 50 and 60 Indigenous participants from across the country received funding to attend by the Impact Assessment Agency of Canada.

This year’s theme was about strengthening confidence in impact assessments through “policies, partnerships, and public involvement.”

Key factors identified in confidence-building involve meaningful collaboration with Indigenous governments. Practical application of this principle culminated in discussions at the conference about the United Nations Declaration on the Rights of Indigenous Peoples (UNDRIP) and the federal government’s Bill C-15, an act to implement UNDRIP in Canadian law.

“There is a general concern that while there is some sort of passage of the United Nations declaration Bill, that it will require some serious political work to make it even effective,” said Montour.

Still, Montour was encouraged by the words of other Indigenous speakers at the conference, who shared in the principles of the Ohèn:ton Karihwatéhkwen.

“This is Creator’s law, and nature’s law keeps us grounded. We need to consider that law as well, not just culture.”