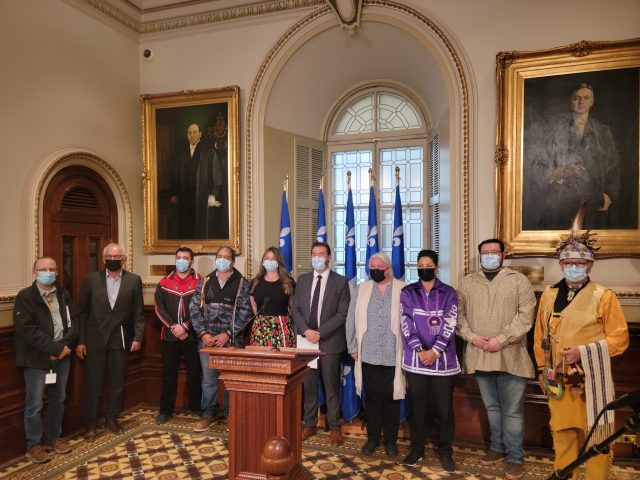 Quebec continues to refuse to make exceptions for Indigenous nations concerning Bill 96, even as Kahnawake and other Indigenous community leaders warn the province of the harm the legislation would pose to Indigenous youth and culture.

Mohawk Council of Kahnawake (MCK) grand chief Kahsennenhawe Sky-Deer, who was joined by fellow MCK chiefs in addressing provincial leaders on Tuesday, noted the bill “goes against that nation-to-nation and that kind of equality relationship that we’re looking for in being able to address things in a meaningful way through dialogue.”

But the minister for the French language behind the bill, Simon Jolin-Barrette, has refused any amendments to exempt Indigenous communities, telling reporters, “As was the case in 1977, everyone is subject to the Charter of the French Language.”

“I want to reassure people, nothing changes for First Nations,” said Jolin-Barrette, according to multiple outlets.

Today (Friday), Sky-Deer is meeting with Jolin-Barrette and the minister for Indigenous Affairs Ian Lafrenière to discuss the bill and the consequences of its potential application for Kahnawa’kehró:non.

“When push comes to shove, Kahnawake is going to continue to be the leader in this region, for First Nations, to set the bar on the way; unfortunately, it seems like we have to take action to get attention,” said Sky-Deer on the pushback against the bill.

At the conference, AFNQL regional chief Ghislain Picard said the bill contradicts Legault’s former apology of Quebec’s treatment of Indigenous Peoples in 2019: “He said the Quebec government will not impose its solutions, and that’s exactly what this government is doing by forcing the adoption of Bill 96.”

Multiple attempts to discuss or amend the bill by Indigenous communities have been ignored by Quebec for months. “Even when we play by their rules, we are becoming the victims,” said Picard.

In an interview with The Eastern Door, Sky-Deer highlighted the educational and professional impairment the bill can create. In addition to how threatening it can already be for Indigenous students to study in CEGEPs outside of their respective communities, their success can be further stressed by being forced to complete language requirements in their third language, French.

“I’m worried about their overall mental health and the impacts that’ll have, impacting their aspirations and dreams,” Sky-Deer.

She warned youth would have to seek education out of the province to avoid the language requirement, a decision which could weigh on the already just over 40 percent lower than average graduation rate from non-Indigenous communities.

But while focus has been drawn to the bill’s requirement of additional French second-language courses in English CEGEPs, Sky-Deer had hoped the press conference and pushback would spur a dialogue for Indigenous leaders to share how the bill can have widespread consequences.

“Everybody seems to be focusing specifically on education,” said Sky-Deer. “But this bill has far more reaching impacts in different sectors also.”

According to the MCK, the bill would elevate the French language in a manner that could undermine fundamental rights by imposing barriers of accessibility on a number of services in the province. Also, the bill is designed to be exempt from certain laws in the Canadian Charter of Rights and Freedoms and does not include protection on Indigenous languages or rights.

“What we’re looking for is respect and recognition of our Indigenous language and culture that doesn’t come at the expense of theirs having precedence or being the primary language of the region, and it totally ignores ours,” said Sky-Deer.

Ultimately, if the bill becomes law later this month, the grand chief said it will not be implemented in Kahnawake, asserting First Nations have control over First Nations education.