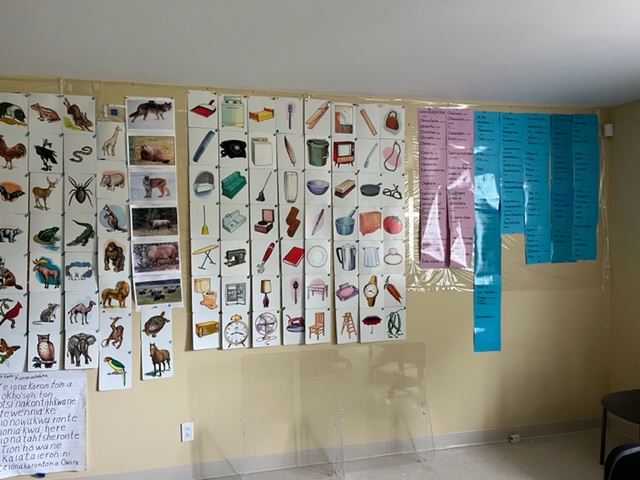 The Kanien’kéha Adult Immersion Program in Kanesatake is collaborating with McGill University to instruct and certify 10 Indigenous language teachers in Kanesatake.

“We’ve had so much interest. It’s incredible,” said Kanerahtenhá:wi Hilda Nicholas, director of the Kanesatake Language and Cultural Centre.

The program and waiting list filled the same day it was announced last week, on April 26. While Nicholas was speaking to The Eastern Door for this article, another prospective student came to the centre to inquire about registration, only to have to be turned away.

“I wish I could accept everyone who wanted to get into the program,” said Nicholas. During her 30 years at the centre, Nicholas said the certified teachers were usually quickly hired by different organizations after graduation.

“As soon as these graduates graduate, other services grab them. There’s a need for them. So it’s just we can’t produce speakers fast enough,” said Nicholas.

While interest in the community is high, teaching staff and financial resources are limited. The 60-credit program, the Certificate in Education for First Nations and Inuit Program, Specialization Language and Culture, will consume all the centre’s resources for this one cohort.

The three-year program beginning this September is set to run Monday to Thursday, from 9 a.m. to 4 p.m., along with evening classes. Committed incoming students will receive a stipend of $17 an hour to participate in the program.

“If I had the money, it would be a lot more than $17 an hour, that’s for sure. It’s hard work. Learning a new language is very, very hard. And it takes a lot of dedication,” said Nicholas.

Elementary and high school Kanien’keha instructor Tiohentathe Brenda Etienne said the community is not only in dire need of traditional language teachers for future generations, but also for current students.

“I’m so thrilled that this is happening. I can think of retiring,” said the 65-year-old teacher.

Many of the language teachers in the community have neared or are past retirement age in the language program, staying on to pass on Mohawk tradition.

“This is a great succession plan. And it’s a great relief to me, and I’m sure other Kanien’kéha teachers will fully agree it’s a great thing,” said Etienne.

She is a class of 1993 graduate of the McGill program for First Nations Education. At the time, students in the community had to commute to the downtown campus and rely on the limited stipend, which she said is necessary to ensure the success of the students.

“It’s such a balancing act for them because they could have to put bread and butter on the table,” said Etienne. “It’s a matter of all you have to feed your babies and your family. So you can’t just quit work and go (study for) three years or four years.”

McGill University did not respond in time to a request for comment for this article.

The program will run jointly with the Mohawk Language Custodian Association (MLCA) and McGill University, in collaboration with various Kanesatake organizations such as Kanesatake Education Centre, Kanesatake Health Center, and the First Nations Education Council.

“We are thrilled at this opportunity, and I wish the best for the incoming class,” said Nicholas.