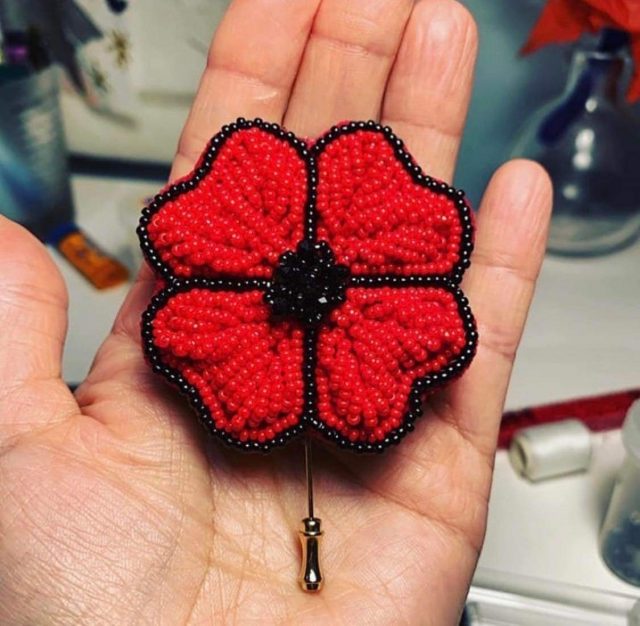 For the past two and a half years, community member Terri Thomas has been gifting beaded poppies to the families of fallen local veterans.

“The idea to make beaded poppies for all our veterans who pass away came to me about three years ago, after witnessing the beautiful military funeral send-off of a relative who was a veteran,” said Thomas. “It inspired me to try to make a beaded poppy, as most veterans – both living and deceased – wore the plastic ones.”

Thomas explained that she started out by making one beaded poppy, and the result was much better than she expected, so she made a few more. She then contacted the Royal Canadian Legion Branch 219.

“Terri reached out to me with the idea of giving a beaded poppy to a veteran that has passed on. They will have the beaded poppy with them as they go onto their next journey in life,” said local veteran and Legion executive Tara Jacobs.

“She asked if the Legion would be on board with this idea, and without hesitation, I answered for the Legion and stated yes.”

When a veteran in Kahnawake passes away, Thomas is notified and creates a custom beaded poppy which Jacobs then presents to the family. The beader said that on occasion, she delivers the poppies herself if she knows the deceased personally.

Thomas, who does beadwork in her downtime and has been beading for around 18 years now, recounted how she was taught how to make moccasins by Pauline Loft when they were both students in the Kanien’kéha Ratiwennahní:rats Adult Immersion Program.

“I am forever grateful to her for teaching me. I’m also surrounded by a great group of bead workers who offer tips, tricks and guidance, and I also am very thankful for all their help over the years we’ve been beading together,” said Thomas.

Although she is not certain, the beader believes she has given between eight to 10 poppies so far.

“My mother made beaded poppies maybe 10 or 15 years ago, and I always admired hers,” she said.

Ray Deer, president of the Legion Branch 219, said that this initiative, which Thomas dubbed the Poppy Project, honours our local veterans.

“Our community and other Native communities started beading poppies, and that is what people want now. Beaded poppies are a symbol of First Nations veterans,” said Deer. “It identifies us, and I think that is where there is a renewed inspiration with the poppy campaign for First Nations communities.”

Thomas has now called on her fellow beaders to join her project and continue honouring those who made the ultimate sacrifice in service of our land.

Cathy Guimond, a local bead worker, responded to the call.

“I saw her post on Facebook, and I was drawn to it. I enjoyed beading, and the idea of the Poppy Project was to acknowledge the veterans. And to honour their memories,” said Guimond, who has been doing beadwork for many years.

“And also, what is happening in the world and the men and women who decide to go to war… no one wants to go to war.”

Guimond is very passionate about her beadwork and is constantly challenging her craft by practising new techniques and manipulating different materials. She said that she has made poppies in the past and is looking forward to contributing to the project.

“I believe this initiative is important to the families of the deceased veteran as it’s a thank you gesture for the service that they have given for our freedom,” said Jacobs. “The feedback has been great. Families are not expecting it and become overwhelmed and grateful.”

Thomas said that as a child, she grew up going to the Remembrance Day parade every year with her mom to honour her grandfather Angus O. Goodleaf, who fought in the Battle of Vimy Ridge during the First World War. She still attends the parade and now brings her own daughter along.

“It’s important that she knows the sacrifices that our veterans made for the freedoms that we enjoy today,” said Thomas. “We have so many veterans in our community, and sending them off on their next journey with a beaded poppy on their lapel is just a small token of my appreciation for their service.”

She decided to go public with her initiative because there are so many local talented bead workers in town, and she wanted to give them an opportunity to join and contribute.

“I received a few replies from interested people within our community who have committed to beading a poppy. I also received a commitment from a beader in Tyendinaga who also wants to participate,” she said.