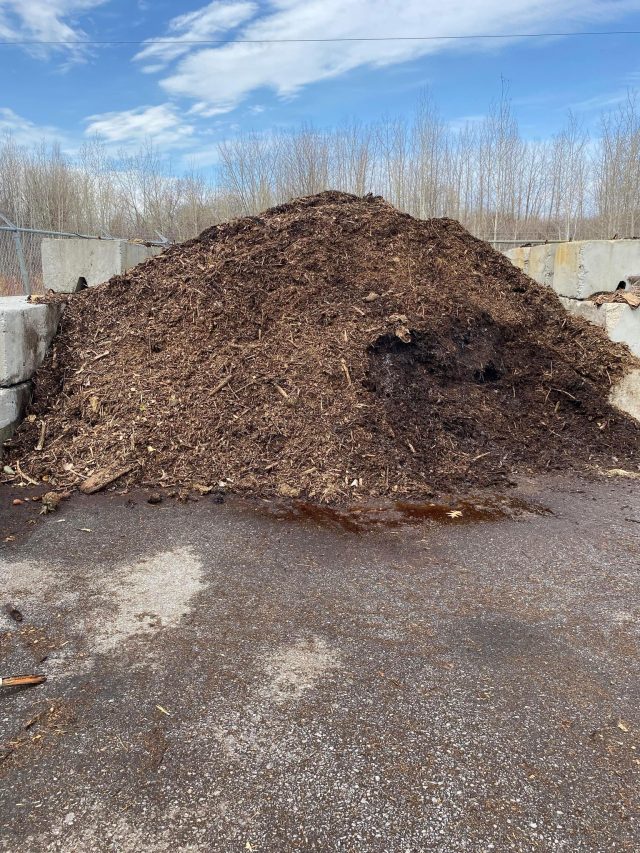 The organic collection program launched by Kahnawake’s Waste Management Department is flourishing according to many metrics – impressive in nearly every way, perhaps, except the participation rate.

Community composting has become more sophisticated, and the soil it produces is safe, balanced, and being put to use in community gardens. What’s more, the program has been fully paid for with external funding.

Yet, while the environment is a key political and cultural priority for Kahnawa’kehró:non, only about 800 free compost bins had been distributed by the end of 2020. Data is hazy, but the department’s manager, Holly McComber, estimates that as of last year, only 20-30 percent of community members were actively composting using any method.

A recent draft waste management plan for 2023-2030 is a little rosier, stating only that less than 40 percent of community members participate in organic collection.

McComber has spent more than 30 years dedicating herself to the environment in Kahnawake, first starting at the Kahnawake Environment Protection Office (KEPO) around 1989. She promoted backyard composting for many years, and when responsibility for waste management was transferred to Public Works in 2016, she travelled with it.

The same year, the federal government launched a new funding source for waste management initiatives for First Nations, and McComber was ready with the documentation needed for a proposal.

By February 2017, a pilot project was launched, with waste collected in buckets and brought to the transfer depot, where it was mixed with wood chips.

“We started doing the work. We made sure the pile was good, that it was cooking,” she said. The decomposition produces heat, which must be maintained to kill pathogens.

Eventually, the operation was expanded and moved toward aerated static piles, reducing the need for turning. By spring 2019, the program was fully rolled out.

A new scale arriving soon will make statistical analysis more accurate, but it is certain participation in composting is far short of the 100 percent goal, something McComber blames in part on the pandemic interfering with promotion.

“We only have one Mother Earth; it’s important to take care of her,” said community member Megan Day, who puts out a green bin for collection.

“I try to separate as much as possible to leave very little garbage,” she said.

Others, such as Kaylia Marquis, compost in their own backyard.

“I do it just because it’s less for me to remember to bring to the curb, and I can put in a few things that are not accepted through the curbside pickup,” she said.

Marquis approves of any form of composting, including the green bin.

“It is our role as Onkwehón:we, and we need to do as much as we can to ensure that our environment is healthy so that we can be healthy, and our descendants are healthy,” she said. “We need to be good ancestors.”

The Mohawk Council of Kahnawake (MCK) is tasked with the approval of the draft plan, which is currently in community consultations.

“This is a really important program in my view,” said MCK chief Ross Montour, who leads the environment portfolio.

He said he is not sure why the program is not more popular but speculated that some things take time to catch on.

“I just want people to really think about a culturally-based approach to our footprint here as humans,” he said.

“I think of the Ohèn:ton Karihwatéhkwen when I think about different things that we do, incorporating that worldview into everything that we do.”

“I always say I want my grandkids to have the same kinds of advantages I had when I grew up,” said McComber. “Playing in the bushes, playing in a nice creek, looking at fish, frogs, birds, to make sure that’s there for my grandkids.”