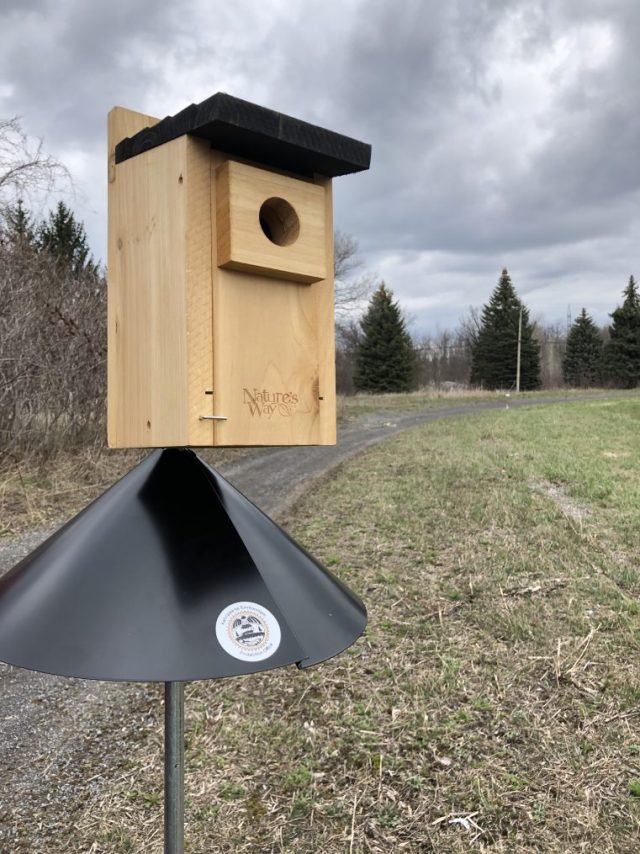 The Kahnawake Environment Protection Office (KEPO) is installing 10 nest boxes in a bid to provide more nesting areas for the endangered eastern bluebird.

The boxes will be set up along a nest trail on the grounds of the old Kahnawake Survival School campus.

“Our goal is to have students help monitor the boxes during the nesting season,” said Julie Delisle, KEPO’s environmental education liaison. “We want to share lessons on wildlife conservation, habitat protection and invasive species. We will provide factsheets on the bluebirds and updates on the progress to the entire community.”

This type of bird has seen a decline in its population in large part due to habitat loss and insufficient nesting areas.

KEPO applied for a grant offered by Bird Protection Quebec (BPQ) to fund this project.

“We are grateful for their financial and professional support!” said Onawa Jacobs, general manager of environment protection at KEPO.

Bonnie Soutar of BPQ’s grant committee said that they agreed to grant the full funding that was requested for this project because it involved both conservation of wildlife and community education.

“The more you can engage citizens of a community, the more likely that you are going to have success in preserving,” said Soutar.

Having youth involved in learning about wildlife and different conservation challenges fosters increased sensibility to these issues, she said.

Soutar explained that the eastern bluebird is part of a family of fly-catching bird species that have seen a 70 percent population decline in the past 30 years.

“They’ve become very dependent on humans because of the loss of natural cavities that they nest in,” she continued. “They really depend on us to put up boxes for them.”

Another reason the group was happy to fund the project was because they want to continue to build a strong partnership with Kahnawake.

“The local community already understands and knows a lot about wildlife and conservation,” said Soutar. “We want to learn from each other.”

KEPO also participates in a yearly winter bird count with BPQ as part of a larger national conservation effort.

Jacobs said Kahnawa’kehró:non are unlikely to come in contact with the nest boxes given where they are located.

“Should, however, someone come across one of the nest boxes, we ask kindly that they do not disturb it, regardless of the time of year.”