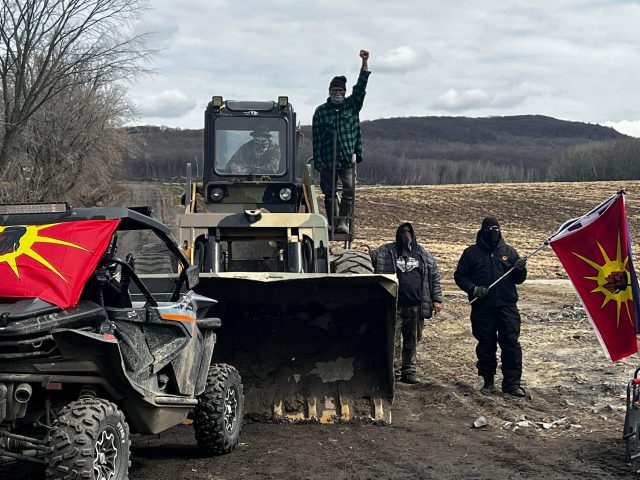 On Tuesday morning, a handful of land defenders gathered in front of a parcel of land owned by Les Jardins Vegibec Inc, a vegetable farm located in the middle of Kanesatake, in an attempt to reclaim their land back.

“The land should never have been sold to outsiders,” said local activist Al Harrington who picketed in front of the farmland located next to Little Tree Gas. “It should have stayed within the community. One of the big issues here in the community is housing. This land could be used for housing or for economic development.”

Harrington said that he went around the territory on Monday trying to rally people behind him, and although the majority shared his view, they were afraid of taking any steps for fear of reprisal.

“After we arrived and started to set up, Vegibec took out the tractors, and the workers were pulled out. They were here, and then they all left. I don’t know if it had anything to do with us,” explained the activist.

Mohawk Council of Kanesatake (MCK) grand chief Victor Bonspille told The Eastern Door that the land in question is legally owned by Vegibec after it was sold years ago by a Kanehsata’kehró:non.

The Eastern Door attempted to contact Les Jardins Vegibec multiple times prior to publication but did not receive a response.

According to public records, Vegibec became a registered company in 2009. The farm produces cabbage, brussels sprouts, peppers, lettuce, celery and cantaloupes. Its LinkedIn page also states that it employs over 300 workers during its production period.

“The ones that are here today agree that that transaction should have never happened. And the community was not aware of it. People started asking questions a few days ago,” said Harrington.

Bonspille explained that last fall, Council was advised by the perimeter security team that the company was cutting trees down and getting close to the territory’s mountainside.

“They do have legal ownership of the property, but our question is… And the reason for this protest is about the fact that they are cutting trees and our community members are worried that they are going to be encroaching onto our mountainside of Blue Mountain,” said the grand chief.

“They should realize that they are on Mohawk territory even though they own the property. They own their topsoil where they are making their produce, but the lands below belong to the Mohawk Nation of Kanesatake.”

The grand chief said that he, along with former MCK chief Jeremy Tomlinson, had a meeting with the owner of Vegibec, Pascal Lecault and asked him how much more clearcutting he was planning to do.

Tomlinson’s uncle Charles Lamouche was the one who sold the land to Vegibec, according to Bonspille.

“We asked him to not do it so much (cutting down trees) because there may be some issues, but obviously, he did not listen, and he said that if we had issues with him that he had the ownership of the property and that it was for sale,” he said.

According to Harrington, on Tuesday afternoon, the Surete du Quebec (SQ) showed up at the site of the protest.

“The SQ was called, and they came in, and the owner was there. Victor also came by. We called the owner up to the back of Vegibec. He was escorted by an SQ officer,” he recounted. “What the owner was saying was that he was going to sell the land back to a Native. I guess there are talks already happening with a local business.”

The grand chief said that Lecault told him during their meeting last fall that the land was for sale for $6 million.

“Of course, we don’t have that. Back in the day, when it came up for sale, the federal government should have intervened and purchased it for the sake of Kanehsata’kehró:non and added it to our land base. But they didn’t. Instead, they let it go to a non-Native,” he said.

Harrington does not think the land should be sold to a local business because it would only serve the wealthy business owner.

“I told him (Lecault) that enough was enough and that the land had to be returned to the people. Victor was talking politics, and I told him that I didn’t believe in the system either. If he wants to start talking that way to us, then he is just like the government,” said Harrington.

“Our goal is to get the land back to the community. And then, it needs to be a community decision on what to do with this land. As much as the band is here, it can’t go through the band. It has to go through the people of the Longhouse.”

Bonspille said that there are provincial laws regarding clearcutting and pesticides in residential areas and that the MCK’s environmental team would be exploring all of the options available to address the situation.

“The ultimate goal is to get our ancestral lands back from anybody who is not a member. That is always in question. Every time we talk with Canada (about the ongoing land claim), there is the potential of adding something new to the discussion,” said the grand chief.

For his part, Harrington said he is frustrated with the lack of progress over the past 32 years since the Siege of Kanesatake.

“We are going backwards. Another big chunk of land was taken away,” said the activist.