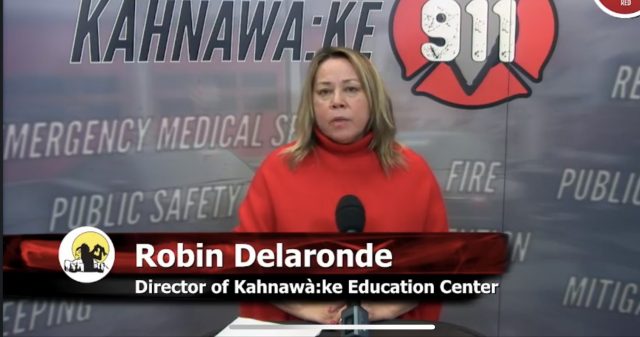 Kahnawake chiefs and educators warn that amendments to the provincial Bill 96 will not only set up Kahnawake students to fail in CEGEPs but also increase colonial imposition on the part of Quebec.

Under the new bill and recent amendments, students will be required to take a minimum of three additional courses in French only, the number of students allowed to attend subsidized colleges and non-subsidized private English-speaking colleges will also be frozen, and students in one-year college certificates (AECs) in anglophone and francophone schools must have “conditional knowledge of the French language” to receive their certificate. Moreover, College diploma (DEC) students will have a written French language exam requirement.

Mohawk Council of Kahnawake (MCK) chief Ross Montour believes this bill is about a colonial attempt to impose provincial policy on Mohawk people who have already suffered under colonialism in terms of the language loss in the community.

He said the bill’s emphasis on French education when Kahnawake functions with other languages – English and Kanien’kéha – is evidence of the systemic discrimination and racism of the Quebec government.

“The presumption that you need to learn this language to be part of Quebec society is racist,” he said.

“Many of our students will study outside of Kahnawake,” Montour continued. “They seek to get an education to bring back to serve their own community, and it is just really bullying on the part of the government.”

Montour said this is not about incapability or capability to learn the French language; it is about respect towards Indigenous rights.

“Quebec does not respect the inherent right of self-determination as an Aboriginal right under Section 35 of the Constitution Act, 1982, in relation to internal matters in communities, including languages. And thus, the province violates the United Nations Declaration on the Rights of Indigenous Peoples,” Montour said.

“English became predominant, but I have no desire to say it is my first language. That is a result of assimilationist colonial imposition on the part of the government of Canada and its other governments.”

The chief said some First Nation adult education centres were promised the ability to use an Indigenous language course of study as the requirement, but the government failed to honour that.

“Where Bill 96 is concerned, it’ll harm our students’ access to higher education,” he concluded.

Director of Education at Kahnawake Education Center, Robin Delaronde, believes this bill will limit students’ access to colleges and will reduce their motivation to pursue their career goals.

“Even without this bill, our students are challenged with the French language courses that they must take to be able to obtain their certificate,” she said. “Because of this, some of them have to stay an extra term to be able to pass the French course or to spend extra dollars for tutorial support. There is a lot of stress on the students.”

Now with the new requirements, students are at risk of dropping out or choosing to leave Quebec and go to another province to attend different colleges and pursue their goals there, Delaronde said.

The Bill hasn’t become law yet, and an amendment that would delay the application of the provision to 2024-2025 was brought forward by the province.

Delaronde said that since last year the First Nations Education Council has voiced opposition to the new reform. However, the government seems to not listen to the recommendations.

“Now we are going to do more community approach to get more information from community members, neighbouring communities and different people to work together and put together a plan of action,” she said.

MCK chief Harry Rice believes meeting with the minister of education to express concerns about Bill 96 is important.

“It is not only a language thing,” he said. “It comes down to a form of assimilation: the government wants all the English population to convert into French, and this is a way of controlling the environment.

“We have to continue to collaborate with the Kahnawake Education Center, to continue dialogue with the school committee, and see to what it will come together with and to fight this bill,” Rice said.

Overall, both chiefs and experts believe if passed, Bill 96 will have numerous negative impacts on student success and increase dropout rates in the community.