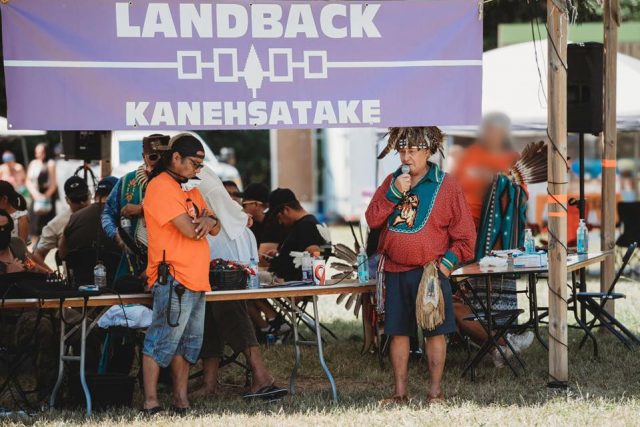 Get ready, Kanehsata’kehró:non, the second edition of the Landback Powwow is gearing up to delight and entertain by introducing live music, organizing games and hosting a special social gathering!

Organizer Al Harrington said that the powwow will take place on May 28 and 29 this year.

“We are going to be having a social on Friday the 27th. It will start in the evening and go on until 11 p.m. It’s usually a meet-and-greet with people coming in slowly. It will be a very nice evening,” said Harrington.

Some of the performers include our very own hip-hop artist Satehoronies “Boopie” McComber, AKA Will E. Skandalz.

“I’ll be performing alongside my DJ, Digital Fire. We had a scare there where the powwow was almost cancelled, but the Creator made sure all was well in order for us to go forward,” said McComber.

“This is a big stop on the #BackLikeWeNeverLeft tour. Powwows are always a highlight when we land those bookings.”

The organizer said that Cree singer Kevin Schofield will also be performing at the social. Schofield, who is based in Ottawa, performs a variety of genres, everything from country to rock and roll.

“He is going to play all sorts of music that evening along with I believe he is trying to get a couple of others,” said Harrington.

Throughout the weekend, attendees will also get to experience the food and discover Indigenous art and culture. According to the organizer, approximately 25 vendors have been booked for the weekend.

“We started Landback last year. It turned out really great. We brought in some special guests, and this year we are going to do the same thing because it is about awareness and getting information out about some of the issues that we are dealing with across the country,” said the organizer.

Harrington explained that he believes that the Landback Powwow (named after the #Landback movement) is a good way to educate people who still don’t know about the ongoing issues that Indigenous Peoples continue to face today, like land dispossession.

“We have Brittany Musgrave. She joined us last year from BC. And they are coming back this year. She is a dancer, a fancy shawl, and she is offering a special with a first, second and third prize,” said Harrington.

“It’s individuals like her that really help with the powwow, and I am so happy that Brittany and her husband agreed to come back and be part of the Landback Powwow again.”

Attendees will also be able to participate in fun games such as bingo powwow throughout the weekend.

“I am also trying to plan workshops for the powwow. This will give artists an opportunity to come and showcase their work and hopefully make some money in the process. It’s a way to help the artists and teach people about our crafts and culture,” he said.

And cinephiles will rejoice as Wapikoni will be screening films on Saturday and Sunday night.

Wapikoni Mobile is a non-profit organization that hosts educational workshops and film screenings to raise awareness and educate the wider public about Indigenous issues. It will be their second year at the powwow.