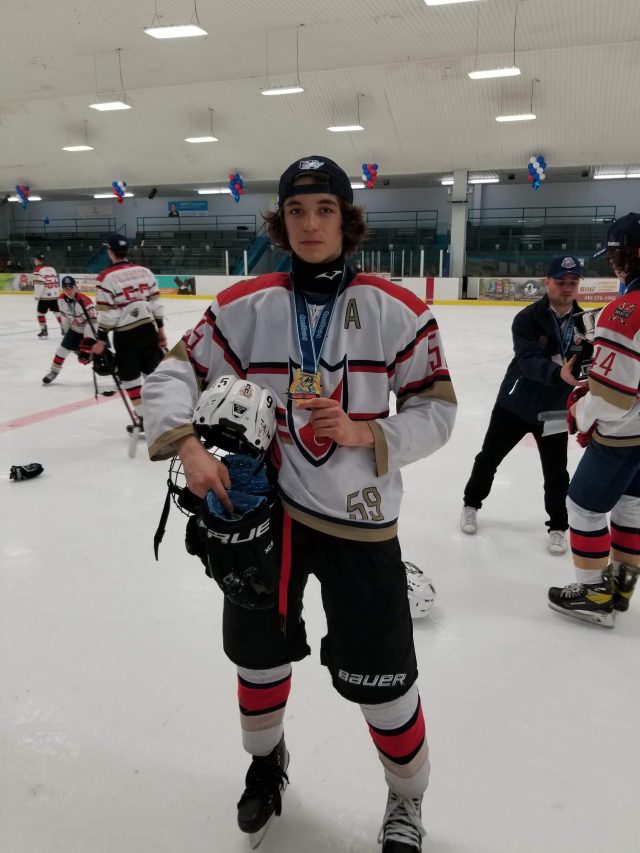 On April 17, in front of a lively crowd, the Selects of College Francais (CF) were crowned the 2022 Dodge Cup Bantam AA champions.

The championship, which was held in Dolbeau-Mistassini this year, assembled the top teams from across the province to duke it out for supremacy during the four-day tournament.

Kanehsata’kehró:non Adrian Onwakenhen Bonspille, 14, and the rest of his team beat the Drummondville Voltigeurs 5-0 last Sunday. It was a day that the Selects are not likely to forget anytime soon.

“I am extremely proud of him and his team,” said Bonspille’s father, Steven. “These boys worked hard all season, and it paid off in the end. They put everything they had into every game.”

“When the final whistle blew, Adrian jumped with his team and was smiling and happy and skating around with the Dodge Cup and getting a gold medal. He was extremely happy. It was a lot of work to get to that point.”

It was a very quick start for the Selects, who played against the Nord Cotiers and came on top 6-0.

However, the celebration didn’t last long after the Selects lost 4-1 in game two against the Voltigeurs, one of the top teams in Quebec.

“The word is proud,” said head coach Dean Pirolli. “It was a season-long accomplishment. I feel so grateful that the team believed in my ideas and everything I taught them.”

But the team quickly rebounded during game three, which was necessary as it was a do or die match against the Sieurs of Trois-Rivieres, where the losing team would be disqualified from the championship.

“They were facing the top team in Quebec, who I believe only lost two games during the regular season,” said Steven.

“This was the second time that we met that team. We met them in the finals of a Sherbrooke hockey tournament, and we lost.”

The Selects ended up beating the Sieurs de Trois-Rivieres 6-1 on Saturday. This victory was defining and set the pace for the rest of the championship.

“All of the different teams came to see us because they could not believe that we beat Trois-Rivieres. After that, everything changed. The players believed more and more, and we became the favourite team,” said the coach.

That same evening, the team went head-to-head against the West-Island Royals and dominated the game with a final score of 4-0.

“What really helped the team was that they got off to a fast start. All but the game they lost, they jumped out to an early lead right away, and the final game was no different. It was a very physical last game,” said Steven.

Pirolli said that every single player on the team gave it their all, and it showed on the ice. They wanted it more, added the coach.

As the championship wrapped up on Sunday, Bonspille and the Selects beat the Montreal Royals 5-1 before playing against and beating the Drummondville Voltigeurs for a final revenge victory.

“We scored 27 goals in total, letting in only six – it was crazy! Our team spirit was also very strong,” said Pirolli.