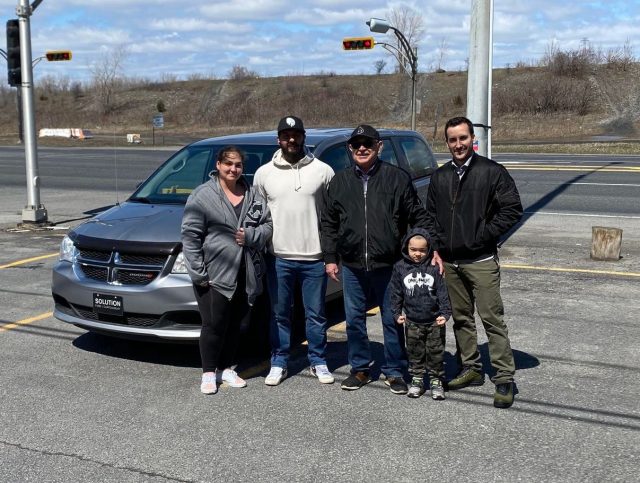 Christy Lahache, who lives in a household of seven people, needed somewhere quiet to take a phone call for this article.

Fortunately, she did have somewhere to go: the 2016 Dodge Caravan recently purchased for her by Playground Poker and Original Tobacco Traders (OTT).

“I’m very independent. I don’t have many friends, much help,” she said. “Given this opportunity where they offered help, I was like, ‘Holy!’ I was super grateful.”

The gesture has its roots in the holiday season when Lahache and her family were the recipients of one of about 40 baskets provided to community members in need by Playground Poker.

The holiday basket, delivered by Mike Thomas, who handles community initiatives for the gaming company, included everything the family needed for a festive meal.

“We started talking, and my kids were all over him,” said Lahache. “My kids were very grateful for the basket, basically. I started getting into how my situation was living in Chateauguay and (how) I finally got back into Kahnawake.”

Lahache lives with five of her children and her ex-partner. Her youngest set of twins, 11 months old, have medical issues. Of her older set of twins, who are four, one is severely autistic and prone to epileptic seizures, while the other is diagnosed with a global developmental delay. She suspects her three-year-old daughter may also be on the spectrum.

Thomas was left feeling that something more had to be done, so he spoke to Mackenzie Kirby, co-licensee at Playground Poker.

“When we found out what was going on with Christy, it was kind of hard to just deliver that basket and kind of go about our normal life after that, just because of the different challenges she has to deal with on a day-to-day basis,” Kirby said.

They invited Lahache to write a letter outlining her situation and needs and settled on the gift of a vehicle that could carry the whole household.

When Kirby picked her up to take her to the dealership to close the purchase, Lahache was overwhelmed.

The dealership, Solution Ford, even gave a discount on the vehicle and agreed to provide free oil changes for a year, while Diabo Auto in town agreed to change the tires for free.

Rather than simply driving off, Lahache insisted on inviting Kirby, Thomas, and Playground’s Spencer Stacey, back to her house to see her kids’ reaction.

“(The kids) were super excited,” Lahache said. “They were giving hugs to everybody. They were beeping the horn. I’m speechless. I still don’t know what to say.”

The elation continued into the inaugural ride.

“When we first got the vehicle, we threw the car seats in and went for a drive,” Lahache said. “The kids’ faces said it all. They were super excited to get out of the house.”

The van is already helping them navigate the different trips necessary to raise children with special needs, relieving some of the pressure on the family.

“Until you’ve done something like this and you’ve impacted another person that way, you can never understand the feeling you receive and the rewards and the riches at a spiritual level,” said Thomas. “It’s incredible.”

He and Kirby believed it was important to get the gesture out there, not for self-promotion, they said, but to send a message to community members that giving and receiving are nothing to be shy about.

“Part of being Kahnawa’kehró:non or Onkwehón:we is embodied in a notion of responsibility for all things,” said Thomas.

“Whoever needs help or whatever is needed, we should all be there to give a hand up,” he continued. “I think Kahnawake is a beautiful place, but we can do much better, and we need to start looking at, collectively, how we can help raise that level for everyone, especially the children.”