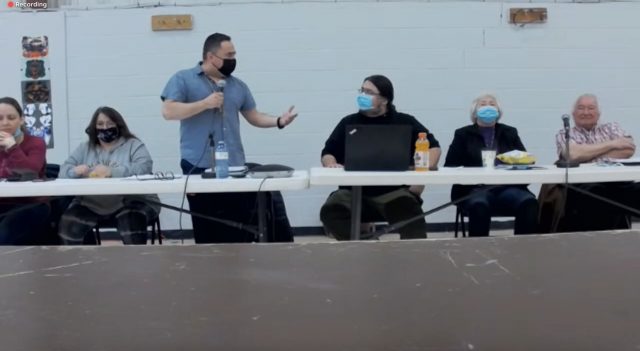 Kanehsata’kehró:non were shocked by the lack of decorum among Mohawk Council of Kanesatake (MCK) chiefs during a community meeting on April 12.

Tensions were high as MCK grand chief Victor Akwirente Bonspille accused a few of his Council chiefs, namely chief Brant Etienne, of what essentially amounts to insubordination regarding COVID-19 relief funding for businesses in the community.

Originally, the agenda consisted of two items: a chief code of conduct and the by-election.

Instead, bickering, shouting and infighting ensued during the two-hour meeting, where community members expressed anger and frustration with Council over its inability to resolve internal issues.

“Last month, it was brought to Council’s attention about some funding that was available through the COVID-19 business relief fund (Indigenous Community Business Fund),” said Bonspille.

According to the grand chief, an amount of $247,836 was available to be allocated to businesses that were negatively impacted by the ongoing pandemic.

“This was brought to Council’s attention by chief Brant. Basically, he was looking for signatures to approve the payout to certain businesses in the community.”

The federal funding was part of the second stream of money intended to relieve financial pressure and allow businesses to strengthen operations with the goal of positioning them for recovery.

The grand chief said that he also inquired about the fund’s eligibility criteria, but that Etienne told him he did not know.

At that point, Bonspille said that he refused to sign the document that would authorize the disbursement of funds to the individuals on that list.

“When it was finally brought to the table before any money was dispersed or decided upon, I called Tracy Bonspiel, who is the manager of Economic Development, and asked her a question because I noticed some names were not on the list who were actual legitimate businesses in Kanesatake,” explained the grand chief.

He specifically inquired why his brother, Barry Bonspille, was not on the list since he has a legitimate business in the community.

“I had asked Tracy for the list of businesses that were going to be receiving money. And she did send it to me. Barry’s name was on it, and so were the names of other individuals that I had asked about,” he said.

On the list, his brother and a few other individuals were highlighted because they had already received financial aid during the first stream of funding in 2020.

“When it was finally brought to the table on March 24 for discussion, I questioned the whole process, and again Brant told me that he did not remember doing a follow-up,” said Bonspille.

“When I asked him who decided which businesses would get this money, Brant told me that it was himself, chief John (Canatonquin), and Tracy that decided.”

During the meeting, chief Etienne said that the funding came in three months ago, but that the topic of the funding was not brought to the Council table because meetings had been cancelled due to the pandemic.

“We attempted to bring it to the table, and when it finally came, unfortunately, it was the last two weeks of the fiscal year,” said Etienne.

According to chief Etienne, the COVID-19 business relief fund was not deferable and if the money was not distributed by March 31, 2021, it would have to go back to the government.

However, Nicolas Moquin, a spokesperson for Indigenous Services Canada told The Eastern Door that unexpended funding as of March 31 of this year was eligible for carry-over into the 2022-2023 fiscal year. Additionally, he said it was subject to the provisions included in the recipient’s funding agreement.

Etienne said the real dispute was because Bonspille had requested that his wife, his brother, and his niece be added to the list.

“I went around asking for the signatures because Tracy knew that this would happen and that nepotism and abuse of power would lead to this situation,” said Etienne.

The grand chief refuted the allegation and emphasized that Etienne and Canatonquin did not follow MCK protocol by not bringing the funding and potential recipient list to the table.

“John said that he did try to bring it to the table, which I remember was brought to the table at one time about three months ago as a discussion item. But not for decision, and not to move forward,” said Bonspille.

“I was told that I was dictating. I was only inquiring because there was no process except for the fact that two chiefs and a manager decided to disperse these amounts.”

The grand chief said he asked Ami-Lee Hannaburg, the interim Finance manager, not to process any payments until the Council had reviewed everything.

Furthermore, Bonspille said that some of the businesses on the list were no longer operational or legitimate businesses, and some were on social assistance.

“Now, how can you have a business and be on social assistance at the same time? To me, that is fraud,” he said.

On March 31, the MCK received a formal complaint that the distribution and delivery of the funding did not follow federal guidelines.

“John conceded that he was aware that some of the people on the list did not even have legitimate businesses, but said that the money had to be spent.”

Etienne countered that the list had gone through eight revisions in the last three months, and the names were selected based on guidelines set forth by him and administrators from the Economic Development portfolio after Tracy Bonspiel requested assistance.

“We did not single out people or pick and choose names. Artisans, online, home businesses, and places with physical assets, those are the parameters,” explained Etienne.

A few community members criticized Etienne for not publicly announcing that money was available for relief nor any information regarding eligibility and the application process.

“When this whole issue came up, we were discussing that maybe there could have been a communique sent out regarding this funding, but… this was a major focus, and we didn’t think it would be controversial because we were taking our time and doing our due diligence,” Etienne told The Eastern Door on Wednesday.

During a lively exchange, a community member shouted that the people wanted transparency and accountability. The grand chief said that the payments were ultimately processed without his approval.

As Bonspille and Etienne continued to butt heads, those present were distressed by the scene unfolding before their eyes. In another heated moment, an elder stood up and interjected, telling Bonspille to show restraint.

It turns out that some of the other chiefs, including Etienne, Amy Beauvais, Canatonquin and Denise David, had a separate meeting and, through quorum, directed Finance and Administration to process the payments, according to Beauvais.

In the end, 48 businesses received aid, said Etienne, who argued that they were able to help more businesses than in the first stream of funding, where only 14 businesses benefited.

“Victor had said no. You did things on your own. You went against Council,” another community member said to Etienne during an exchange.

In response to the actions of Etienne and Canatonquin, the grand chief said that during the last Council meeting two weeks ago, he announced that he had removed Etienne from the Economic Development portfolio and reassigned him to Taxation. Furthermore, he also removed Canatonquin from the Finance and Administration file and put him in charge of the Lands file.

“I did that because of the blatant disrespect shown at the table not just towards me but also towards the others,” said the grand chief.

According to Bonspille, he later received an email that chief Canatonquin had sent to the entire staff not to listen to his directive regarding the portfolio changes.

“I stated that I was disciplining, not dictating. That is something that nobody has had to do to another Council,” he said.

“And that is why things have run amuck. People just let things go. People don’t say anything. This has got to stop for us to be able to move forward in an honest and transparent way.”

Etienne said, in his view, he has not been reassigned to another portfolio because Bonspille did not pass the motion through a Band Council Resolution, which would require a quorum of at least four chiefs to be approved.

“We shall pass it through Council and finalize the portfolio distribution and reassert that John has signing authority,” he said.

While both men agreed a code of conduct for chiefs was necessary, some present stated that what this Council required was mediation.