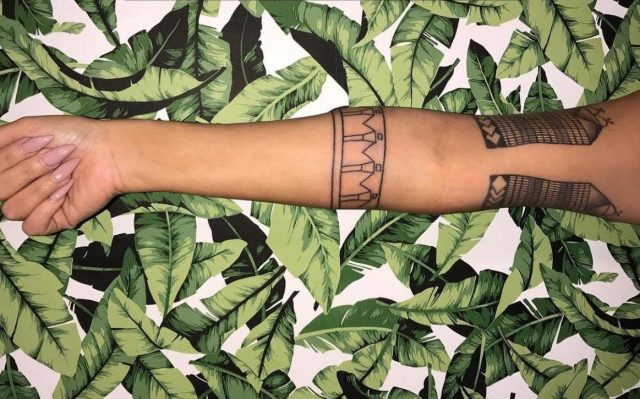 Kanehsata’kehró:non Margie Canadian was scrolling Facebook last year when she saw an advertisement for the 2021 Indigenous Tattoo Gathering in Tyendinaga. The event piqued her interest, but she left it at that.

When later she received a phone call from someone she knew inviting her to go, she leapt at the opportunity, despite not knowing much about the traditional practice.

It was blistering hot when she and two companions arrived at the gathering, but they were amazed by what they found there.

“It was just the most beautiful thing that we had ever seen,” Canadian said.

“The first thing that popped into our heads was we had to bring this to Kanesatake because it was all about skén:nen – peace.”

When she returned home, she brought the idea to a group of women to which she belongs, a group of land defenders who are committed to protecting the Pines.

“We jumped in headfirst without knowing who was coming, who was going to help us, where we’re going to get the money,” she said. “It was just a grassroots movement. We just knew.”

Now the Kanesatake Traditional Indigenous Tattoo Gathering 2022 is slated to come to the community August 6-7, with more information to come soon.

Canadian emphasized that the event differs from a powwow – it is squarely aimed at Onkwehón:we, and participants will need to register.

“This is an Indigenous Peoples’ gathering,” she said. “We are bringing back a piece of our history that was almost lost, and we want to bring it back to our people.”

She also hopes to shed positive light on the community.

“Bad stuff always seems to make the news,” she said. “There’s more to Kanesatake than that, more than all the crap that always seems to be in the forefront of the news.”

The organizers of the event are currently selling club 100 tickets to raise money for the gathering, which will provide a forum for artists who practice traditional tattoo techniques such as hand poke.

Akwesasne tattoo artist Mercedes Terrance will participate in the Kanesatake gathering with her apprentice. She uses professional, individually sealed needles and name-brand inks to do hand poke and machine work.

“Hand poke is gentle, delicate, and unique. This method of tattooing is a slower process, but this is not a negative. It’s a great opportunity to meditate and reflect,” she said.

“Traditional Haudenosaunee hand poke tattoos are very important to me because ink has carried the stories of our ancestors and all that we have accomplished or earned in our life and embedded into our skin.”

This sentiment is echoed by other practitioners of traditional tattooing.

“To me, it has to do with the resilience of our people. These markings have been around since before contact, since before colonization,” said Gillian Prince, 23, who is Anishinaabe/Ojibway of the Mattagami First Nation.

They are the only person they are aware of in their community to learn and practice traditional tattooing.

“I want to encourage any young Indigenous person who is wanting to get markings or is wanting to learn how to do any sort of tattooing, skin stitch, any of the above, to just do it,” they said.

Tattooing has given them a new outlook on life, they added.

Many in Kanesatake and Kahnawake are already looking forward to attending the gathering.

“I don’t know too much about it, but I am excited to learn more,” said Kanehsata’kehró:non Wahsontiiohstha Nelson, who hopes to get a tattoo on her hand.

“I think it is important for people to be educated on traditional cultural practices,” said Veronica Montour. “Who knows, maybe someone will be interested enough to learn the technique in our own communities, or it could become an annual gathering.”

While there’s more work to be done, the organizers have already found tents, bathrooms, a site, and have plans to issue a callout for volunteers closer to the date.

“I just want the people to come and experience this,” Canadian said. “It is for our people, the Onkwehón:we.”