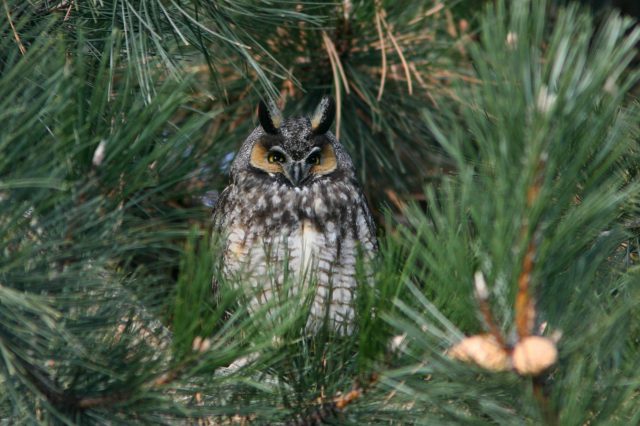 A team from the Kahnawake Environment Protection Office (KEPO) was out doing fieldwork for a few hours Monday night in search of nocturnal owls as part of a nationwide survey.

Cole Delisle, the Environmental Projects coordinator for Terrestrial Habitats at KEPO, said that every April, thousands of volunteers from across the country go out into the night and conduct the survey.

“We do the survey on quiet roads and back areas of the community to try and document the trends and the populations of owls, which gives us an idea of what the population is like right now,” explained Delisle.

“So, if there are any changes in the future to what we are seeing year to year, we will have something that indicates that.”

The survey is organized by Birds Canada, a national charity that works with a diverse number of partners to conserve birds for future generations, according to Andrew P. Coughlan, the director for Quebec at Birds Canada.

This is the third year that KEPO has participated in the survey.

“For this year’s survey, we moved our stations up a little bit because we did not have too much success the past few years. I am not sure it helped too much, but we did have one owl sighting,” said the coordinator.

The team completed 10 stations between 8 p.m. and midnight.

Delisle explained that at each station, a 15-minute broadcast of owl calls is sent out, followed by a quiet listening period where they await a response.

“It plays a call for a boreal owl, which would be rare for the area, and then it plays several barred owl calls, so any owls around – they are pretty territorial at this time of the year, so they will come and respond with their own calls,” he said.

Although the team has not had much luck spotting owls around the community, Delisle recounted that when they were in the Big Fence area of town, they saw a shadow that flew over them through the trees and then landed on a branch.

“I leaned over to write some notes and my two co-workers said that the owl just flew right over my head like it could have reached out and grabbed it,” he said.

Coughlan explained that an important component of their conservation work includes monitoring the bird populations to discern trends at different scales, which informs conservation measures.

“We just want to keep track of any changes in owl habitats. They could be susceptible if there is any kind of deforestation or development or some kind of destruction in the ecosystem since they are one of the top predators,” said Delisle.

Coughlan said that the partnership between KEPO and Birds Canada also includes a marsh monitoring program. He said that the data collected from the program and the survey is then fed into a national data bank that provides insight on trends across the province and country.

“For the Big Fence, for example, we have been doing a lot of surveys lately for all kinds of different species, so we have a really good data set there. And we know that area is healthy,” he said.

“For the past few years, when we have been doing the owl survey, that is where we always hear an owl, so if something were to change, we would see it through the survey.”

A second night of fieldwork is planned for April 19, and more details should be released next week.

“It is not out of the ordinary for community members to hear the calls this time of the year. I am just the unlucky one,” said Delisle, with a chuckle.