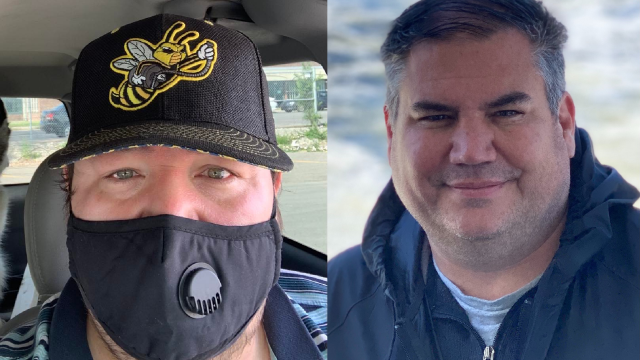 On April 21, 2020, the date Kahnawake first declared a state of emergency due to the pandemic, Bitcoin closed at $6,880.32 USD, about 30 times what it was worth five years earlier.

Of course, the price of Bitcoin was far from the talk of the town. Nearly everyone in Kahnawake was busy wading through a limbo nobody yet knew could seem endless.

Like many in the community, Kahnawa’kehró:non Jeremiah Johnson found himself at home with nothing to do. He decided to look into cryptocurrency, a decentralized digital token that depends on a technology called blockchain.

Johnson began with a general course on investing and was soon spending his time on YouTube and Twitter, gleaning insights from other crypto investors.

“It’s something people definitely need to wake up to because it is the financial system of the future,” said Johnson.

It’s also, at least these days, primarily used as a speculative instrument, although “stablecoins” have sought to remedy this. Today, the price of a Bitcoin hovers around $40,000 USD, with many investors afraid to spend the currency, haunted by true stories like thousands of Bitcoin being traded for two pizzas.

To the uninitiated, Bitcoin may be as synonymous with crypto as Kleenex is with tissue paper, but it is just one of a diverse landscape of cryptocurrencies being traded every day.

While it’s still not possible to step into the Caisse Populaire and buy a crypto product, more and more people are familiar with the concept, and some in town have decided to get in on the action.

For Johnson, the technology holds real promise for practical use, but his primary interest is in its suitability for active trading – short-term investing – and the potential for untamed financial rewards for those who know it best.

While the volatility of the market scares some away, Johnson is drawn to this aspect of trading crypto coins.

“They’re all very hot. They’re very volatile. They all go up, and they all go down,” he said. “It’s like waves in an ocean.”

He is also attracted to the deregulated nature of cryptocurrencies.

“When you reach into your wallet and you pull those dollars out of your wallet, what does it say on them?” asked Johnson. “It doesn’t say they belong to you. It says they’re the property of the bank.”

He didn’t know there were others in town who had gotten into crypto until he made a post on his Facebook account and discovered he was not alone.

“It’s something that people should really consider looking into. But be educated on it, do your research,” he said.

Ken Lemay is another Kahnawa’kehró:non who has invested in crypto coins. He has purchased Ethereum, Cardano, Solana, Sandbox, and even the so-called “shitcoins” Shiba Inu and Dogecoin, essentially meme coins that have little value.

Unlike Johnson, Lemay is not interested in the day-to-day fluctuations of the coins. A cautious investor who got burned on Nortel, Lemay has staked only about five percent of his portfolio on cryptocurrency. He is motivated by the potential long-term value of at least some crypto coins.

“Anyone who’s investing in cryptocurrency needs to understand they’re investing in something that is highly, highly speculative,” said Lemay, who works for a cybersecurity firm.

He knows some of the coins he holds may well go bust, but he is hopeful at least a couple may persevere over the long-term as the metaverse takes hold and life moves further online.

“I don’t think we’re going to take hard currency and port that into virtual worlds, so the idea of using virtual currency to be able to do it makes a lot of sense to me,” he said.

He advises anyone interested in getting involved to do their research given that it is an undeniably risky space.

“The problem with tokens in general is it’s hard to assign a fundamental value,” said Jeremy Clark, an associate professor at the Concordia Institute for Information Systems Engineering.

He said companies that have assets such as land, money, or inventory have a fundamental value anchoring their stock prices.

“With cryptocurrencies, you don’t really have that,” he said.

Also notable, cryptocurrency is not an infallible shield against prying eyes, according to Clark.

“There’s this misconception that Bitcoin is completely anonymous. It’s not true,” he said, although he acknowledged the coins do hold some potential for a degree of anonymity depending on how they are used.

Some who donated to the truck convoy protests using crypto, for instance, were flagged by the government.

However, government efforts to regulate cryptocurrency can be taken as a sign that the technology will not be outlawed, said Clark.

“Cryptocurrency is here to stay,” he said.

While crypto trading may not be new in Kahnawake, there may yet be something novel on the horizon. The Mohawk Council of Kahnawake (MCK) is currently in discussions – more advanced than preliminary – that could see a cryptocurrency mining operation come to town.

Crypto mining describes the creation of new coins; it is also implicated in the validation of transactions.

Mohawk Council of Kahnawake (MCK) lead portfolio chief for economic development Mike Delisle Jr. said he has been approached three times about potential mining operations in Kahnawake, but this is the furthest talks have gotten.

“It would generate revenue for the community based on them having servers within our jurisdiction at Mohawk Internet Technologies,” he said. “It could provide some jobs in an office environment if they do relocate and locate here.”

A local entrepreneur is facilitating the discussions, Delisle said, but the company is from outside the community.

As for those looking to invest in the coins themselves, a familiar rule applies.

“Everybody has stories,” he said. “Everybody loses money investing. It’s part of how it is. It’s the risk you take.”