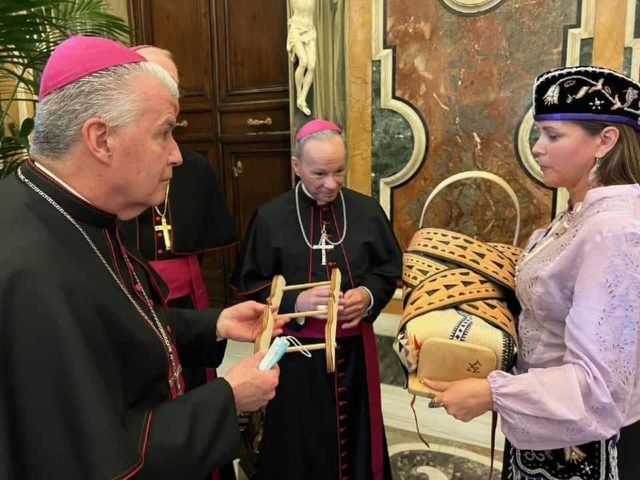 Katsitsionni Fox from Akwesasne and Michelle Schenandoah from the Oneida Nation had less than a week to prepare for their trip to Rome, where they would meet with the pope along with the rest of the First Nation delegation.

The women were asked by Louise Wakerakatse, a Bear clan mother from Akwesasne who had been invited to attend as a spiritual advisor, but was unable to travel.

“When she asked me, I said yes right away. I think I was meant to go there. And we ended up there for a reason,” said Fox, who is a filmmaker and artist.

Before they arrived at the Vatican, the women had decided that they would present the pope with an empty traditional cradleboard as a symbol of all of the children who went to residential schools and never came home.

“I knew that Louise had presented the cradleboard last summer in Ottawa. She had an empty cradleboard mandate to get Canada to take responsibility for these criminal acts that were a genocide of our people,” said Schenandoah.

“I incorporated the cradleboard knowing that bringing it would be representative of that same invocation of reflection for the church and for the Vatican and for the pope.”

The cradleboard was made by Mohawk artist Ian Clute from Two House Design-Crafters in Akwesasne. Fox explained that cradleboards were traditionally used to wrap babies and mimic a woman’s womb.

“I talked it over with Louise, and she did not want me to leave it with the pope at all. So, to bring it back and that would be symbolic of us bringing our babies home,” explained Schenandoah, the founder of Rematriation Magazine, who is also a speaker and writer.

On March 31, Schenandoah and 15 other delegates had a two-hour private audience with pope Francis. It was during this private meeting that she spoke to the pontiff and personally handed the cradleboard to him.

“All of this has made me feel two things very strongly: indignation and shame,” said pope Francis.

“Indignation, because it is not right to accept evil and, even worse, to grow accustomed to evil…I also feel shame – sorrow and shame – for the role that a number of Catholics, particularly those with educational responsibilities, have had in all these things that wounded you, in the abuse you suffered and in the lack of respect shown to your identity, your culture and even your spiritual values,” he continued.

“For the deplorable conduct of those members of the Catholic Church, I ask for God’s forgiveness and I want to say to you with all of my heart: I am sorry.”

In her speech, the writer spoke about the need for action from his holiness and the Catholic Church by revoking the papal bulls that make up the Doctrine of Discovery.

“Revoking those papal bulls is extremely important across Turtle Island, across the Americas and in other Indigenous territories where the Doctrine of Discovery is being utilized to commit genocide against our people and against the land,” she said.

Both ladies said it would be a real first step by the church towards reconciliation.

“Things that happen in our daily life for being Indigenous Peoples, everything from missing and murdered Indigenous women and girls to substance abuse and domestic violence, are all related,” she said. “It all relates back to the Doctrine of Discovery.”

According to Schenandoah, the Vatican has in the past spoken out against the doctrine but had never taken responsibility for it.

“However, during the First Nations delegation’s private audience, the pope did address colonization and the impacts on our people.” He also addressed it in his apology, which took place during a general audience on Friday with over 160 Indigenous people in attendance.

Fox explained that before the pope addressed the delegation in Italian, the audience members had received a pamphlet with his speech translated into English.

“I honestly didn’t even realize during the course of the whole thing that he had apologized. A lot of people didn’t,” said Schenandoah.

However, both women recognized the importance of the pontiff’s apology and recognition of the church’s role in colonization, but believe more action is needed.

“I think that what is really important to note is that I said I was so in awe of all of the elders that travelled all that way. It was hard on us physically to travel there, and we all hit the ground running. And the elders, they were there for all of it,” said Schenandoah.

The writer further recounted that she was wholly moved by the elders’ messages and how well they represented all Indigenous Peoples across Turtle Island.

“They went there with firm conviction. This is what needs to be said for all Indigenous Peoples. It was powerful. It was meaningful. It was clear. It was very well organized,” she said.

Upon their return to Canada, the women returned the cradleboard to Wakerakatse and the community of Akwesasne.