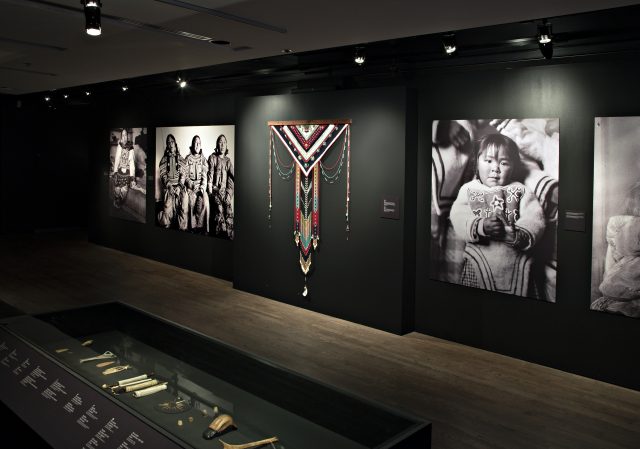 The first thing your eye is drawn to in the exhibition space for Piqutiapiit at the McCord Museum in Montreal is the faces of the Inuit women in the massive photographs lining the walls.

They are even bigger than life-sized, striking in black and white and sporting their beautifully beaded amauti, the parka Inuit women wore and continue to wear.

In the centre of the room is a selection of objects used to make an amauti – thimbles, needles, combs, all-purpose women’s knives called ulu, carved out of bone and horn and decorated with intricate designs.

“I was just in awe of the ingenuity of Inuit,” recalled the Inuk artist Niap of the first time she got to see these objects in the McCord’s collection.

“We lived in a land so harsh and unforgiving, and Inuit took the time not only to make their own clothing, their own tools, their houses, move from place to place; they took the time to make things beautiful.”

Niap is the current artist-in-residence at the McCord. The artist residency program allows a different artist every year to explore the museum’s collection and create original work to be exhibited. The exhibit Piqutiapiit is the culmination of Niap’s residency on now until August 21.

The next thing your eye is drawn to in the space is the artwork she created, also entitled Piqutiapiit, which is Inuktitut for “small meaningful belongings.” It’s also a word used to refer to beads for beading.

The piece is a beaded wall hanging inspired by the objects on display in the exhibition. It replicates the patterns and shapes carved into the tools, the motifs seen on the amauti in the photos on the walls, the complex beadwork on the child’s amauti that is part of the museum’s collection and that is displayed in the exhibition directly facing Niap’s artwork.

“I’m pretty proud of it,” she said with a laugh. “It’s the longest that I’ve ever taken on a project. The whole process was like a six-month thing. Planning, finding the material, trying a few sketches. It took a whole six months of my life.”

To call the piece intricate is an understatement.

“She put thought into every little detail,” said Jonathan Lainey, curator for Indigenous cultures at the McCord and Huron-Wendat from Wendake. “When you look at it, it’s of course fascinating, but to hear her explain every decision she made and why, how it ties into the objects on display, I was astonished.”

She used a lot of found materials, reflecting the way the Inuit reuse old objects for different purposes. Moosehide and teeth from near her hometown of Kuujjuaq, Finnish suede from a different residency she completed in that country, some beads from a necklace she found at a market. The ends of some of the strings of beads are decorated with pieces of bone she sawed herself.

Originally, she had envisioned making about five such wall hangings, but as she doesn’t normally bead, she said she seriously underestimated how long it would take to make just one.

“I thought I was so arrogant,” she said. “When I started beading, I thought to myself, ‘How arrogant are you, to think that you could have done so much?’”

Lainey told her not to worry: she could make one, and they could create an exhibit around it that would contextualize it and provide insight into the work Inuit women put into their amauti. The result is the exhibition space currently on display.

Only one of the photos of the women is part of the McCord’s collection, a wonderfully candid shot of a woman working on an item of clothing as a young girl plays with her hair. The others were taken from other archives.

Lainey said that this was possibly because the people who travelled to northern communities to gather documentation and artifacts for the collection were more interested in the land and in hunting than they were in the activities of the women. But for Niap, it is precisely this, the women’s work, that is so inspiring.

“I was seeing these artifacts, and the conservators that are there never see them with manliness or femininity, but to me, these objects that I was looking at, I find them so feminine,” she said. “The needles, the needle case, the ulu, the clothing.”

She said it surprised her how Lainey and the other conservators didn’t see the femininity in the objects the way she did, and she wanted to explore that through the piece she made.

In the back of the exhibition space is a qulliq, a lamp made with seal oil, blubber and soapstone. On the wall behind it, a video plays of a qulliq in use, flames sputtering gently. Huddled around a qulliq is where Inuit women worked on their clothing and their beading.

“It’s to create the ambiance,” explained Lainey. “It lets you imagine what it was like for the women in the pictures.”

Piqutiapiit is a meditation on the skill of Inuit women. It is also a doorway to understanding the extent of that skill and contextualizing it in the Inuit way of life.

“I always wanted to be a teacher growing up, and I, unfortunately, experienced a lot of discrimination concerning my culture,” said Niap.

She said that as an artist, her goal is to educate people about her culture, to be a teacher in her own way.

“These things that I’ve learned throughout my career I’m sharing, and that’s what’s important first. The media is art, and I just feel so fortunate to do it.”