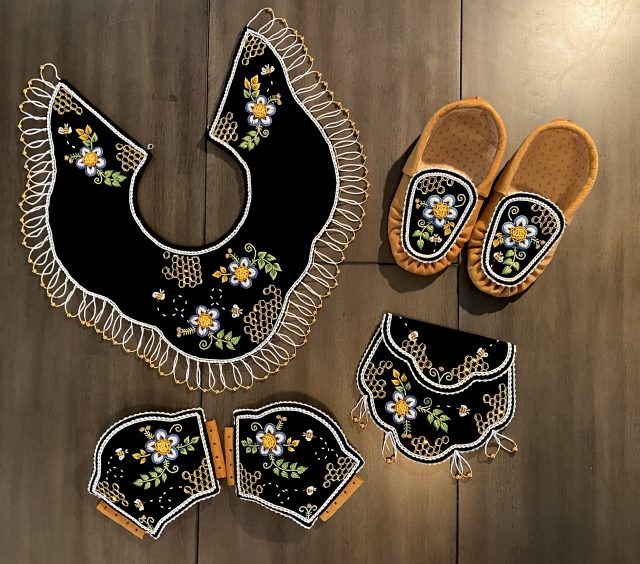 Kanehsata’kehró:non Kawisaienhne Albany started flat beading when she was around 15 years old.

Her first creation was a pair of earrings. But the young woman – now 24 – only started to hone in on her skills a few years later when her aunt Marie David taught her raised beading.

“It looks like 3D and pops up higher, so you can really make a lot of cool things with raised beadwork,” said Albany.

Fast-forward a few more years, and Albany is in the process of opening her own store. Late last month, she also had her first-ever pop-up bead sale at Fuel Bar, a health food store on the territory.

“I announced the shop – Spill the Beads – in February 2021, and it took me a year of saving up money to start this,” said the young woman who recently quit her job as a part-time cook to focus on her new venture.

“The pop-up sale went really well. A lot of people came out from Kanesatake that I did not know. It’s a small community, and I don’t know a lot of people who bead here, so I was surprised to see quite a bit of people come out and buy the beads.”

The products she offers include size 15 Miyuki glass beads that are known for their high quality and consistency, as well as needles, threads, and stiff felts, among other supplies.

“I bead myself, and those are my favourite beads to use, so I thought a lot of people would like that. I have gotten quite a bit of people into beading with size 15,” said the young Kanehsata’kehró:non.

She believes that part of the success of the pop-up sale was due to her aunt (David) spreading the word all around the community.

“I get my products from the US at wholesale price.”

To make her dream of owning her very own beading store a reality, she has partnered with her uncle Jake Kanawaienton Cree who owns the Skywatcher Alpaca Farm in town.

“We are teaming up to build the store together this summer. And it would be the first of its kind in Kanesatake. Kahnawake has quite a few beads stores, but it’s an hour away,” said Albany.

She explained that they plan on dividing the store into two sections, the bead store on one side and Cree’s store on the other.

To get things started, she applied to the economic development program in Kanesatake. The duo also started a GoFundMe to raise funds for the construction of their store, which they hope to build on their property.

“I imagine a store to sell my alpaca yarn and alpaca and llama products that I’d be importing from Peru and Ecuador, but also locally made Native crafts, t-shirts, arts and crafts, along with my niece’s beadwork and her supplies she will be selling. There’s also the bonus of visitors getting to mingle with the alpacas, llama and Muscovy ducks,” said Cree.

He said he started working on the idea in early 2020, and the duo hopes to raise $16,000 through crowdfunding to help offset costs for things like off-grid solar electricity, a duck pond and fence expansion, and of course, the building that will house the store which Albany’s dad Ronnie, who is from Kahnawake, is going to build.

“We will also be developing educational packages in the near future to host schools and youth groups. Basically, it would function like a trading post. Where we will offer a variety of products and experiences,” he said.

Cree said that they are currently in the process of clearing out space to make room for the store.

“I am working on the inventory for when we open. I have some of my own creations for sale, and I would also like to sell some of my friends’ creations so that they can also get recognition for their work.”

Once the store is up and running, Albany wants to expand her products to include beads of different sizes as well as fabric and leather, she said.

“We are not exactly sure yet on the name, but we are thinking of The Trading Post with Spill the Beads and Skywatcher Alpaca Farm under the umbrella name,” said Cree.