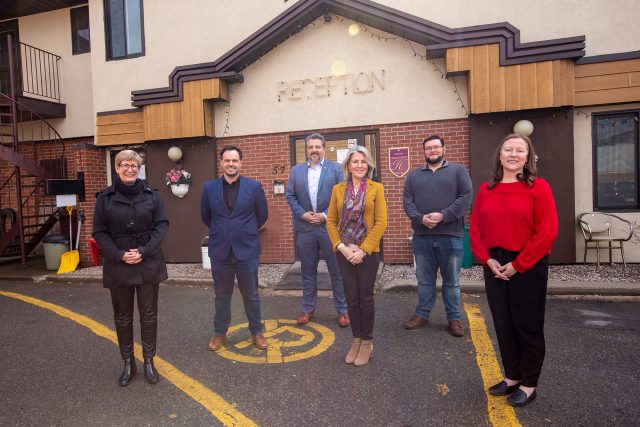 A new social housing project in Chateauguay is set to make a small dent in Kahnawake’s housing shortage by setting aside at least five single-person dwellings for Kahnawa’kehró:non.

“This place could clearly relieve some of the pressure,” he said.

The project will convert rooms at Motel le Rustik to 31 studio apartments for people who are homeless or at risk of homelessness in the two communities.

“My understanding is Kahnawake has more what they call invisible homelessness,” said Alana Kane, manager of mental wellness and addictions at Kahnawake Shakotiia’takehnhas Community Services (KSCS). “We might have a lot of folks who are either couch-surfing, living with family, but really can’t find or can’t afford a place of their own.”

Rent will be fixed to a maximum of 25 percent of a person’s income, and tenants will be allowed to stay as long as they want.

The news comes as the MCK Housing Unit is regrouping with surveys and studies after years of complaints that the community is undergoing a housing crisis.

“We need to have that groundwork done before we can really extend (housing) programs,” said Rice.

Tammy Whitebean, who circulated a petition a year ago demanding immediate action on housing, still sees a tremendous need in the community.

“It’s a great opportunity for some people that will get those places, but here in the community, we need more,” she said.

“I see posts every day of (people) here in Kahnawake looking for housing, emergency housing, whatever it may be,” she said.

Kahnawake got involved in the Motel le Rustik project when its proponent, the Fédération régionale des OSBL d’habitation de la Montérégie et de l’Estrie (FROHME), reached out to KSCS for a letter of support.

“I think it’s really important for our organization to build bridges between Chateauguay and (Kahnawake),” said Martin Bécotte, director of FROHME.

This was echoed by the Liberal member of parliament for the Chateauguay-Lacolle riding that encompasses the motel, Brenda Shanahan.

“I’m looking for, personally, the reaction from the Kahnawake community because I think this is a first for Chateauguay and Kahnawake, certainly for non-profit organizations to be collaborating in this way,” she said.

“What I think is significant about this project, in particular, is the collaboration,” said Kane, who sits on the project’s planning committee.

According to Kane, FROHME reached out to KSCS to see if there was interest in reserving some units for Kahnawa’kehró:non, which there was.

“Obviously, a lot of our clients at KSCS are also folks who might be suffering from a lack of housing in the community,” said Kane.

From a social services perspective, stable housing is often the first step for people in improving their lives in other ways, she noted.

“It’s a big deal when someone doesn’t even have a proper place to call home,” said Kane. “It kind of makes everything else difficult, to plan for the future or to make changes in one’s life when you don’t even know where you’re going to be sleeping tonight.”

KSCS will provide psychosocial support to Kahnawa’kehró:non in the building who may need or desire it, but it is not a prerequisite.

The MCK Housing Unit will take part in developing the criteria and selecting Kahnawa’kehró:non for the apartments, but no local funding will be involved in the project besides what is needed for KSCS to provide services as needed.

What’s more, the pool of government money being used by FROHME was not reserved for Indigenous communities, meaning these units do not come at the expense of something else that might have benefitted the community, Rice noted.

FROHME is receiving $6 million from the federal and provincial governments for the project.

Rice acknowledged that MCK wants Kahnawa’kehró:non to be able to stay in the community, but he is nevertheless glad to see new emergency housing becoming accessible to locals.

“We want to do whatever we can to improve the housing situation and improve the services that we can offer,” said Rice.

The project is expected to be finished by the end of the year.