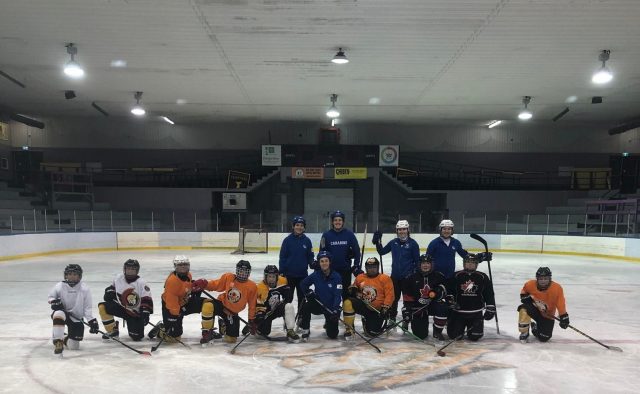 The weather is heating up, and so is Minor Hockey in Kahnawake as local players get ready for their end-of-season tournaments.

One player to watch in this weekend’s President’s Cup action is Oniehtase James Day, captain of the U13C Mohawks team. He pulled off a double hat trick – six goals – in the last game of the regular season.

“I felt pretty good after I got my third goal,” said Day. “I started to feel pretty good about it, and it started going in, and I got more goals. It was just crazy.”

He particularly remembers his second goal, which slipped into the net over the head of the Huntingdon Huskies’ goalie in the Mohawks’ 8-4 victory.

Despite the copious congratulations that followed, Day has kept a modest outlook.

“I just looked at it like playing a hockey game, to be honest,” he said.

Nevertheless, the feat left his family proud and local hockey fans with their jaws on the floor.

“When he got his first three, I was like, ‘Wow, he did it – he got a hat trick.’ Then he just unleashed the beast and kept going strong,” said Day’s father, James Day. “It was a very proud moment for me and my girl to see our son achieve that. Really awesome!”

“I’ve filmed well over 150 games over the last three seasons and have never seen a player score six in a game during that time,” said Brandon Bordeau, who broadcasts local sports on the Baby Blue Memories YouTube channel.

While six goals will always be a surprise, it’s no shocker the accomplishment came from Day’s stick.

“Tase is a workhorse,” said his coach Jesse Lahache. “That kid gives 110 percent every time he is on the ice. Very competitive, which is something you want out of your captain.”

The team had another boost to morale leading up to the President’s Cup. On April 5, alongside the U11C team, the U13Cs took part in a practice led by five players on Université de Montreal’s women’s hockey team, the Carabins.

“I think the kids had a lot of fun, as did we,” said Carabins captain Jessika Boulanger, who is on the Carabins’ student-athlete committee.

Knowing how beneficial sport can be to young lives, the Carabins wanted to encourage Kahnawa’kehró:non athletes to continue playing, especially the girls.

The Carabins worked on passing, shooting, and one-on-ones with the Mohawks before ending practice with some competition.

“They were amazed to see women so talented. They were inspired,” he said.

All Kahnawake Mohawks teams from U11-U18 will compete in the 30-Ouest President’s Cup. The tournament begins for local players today (Friday) at 6:30 p.m., with the U13A squad competing in Huntingdon.

Younger players need not feel left out, however. Three U9 Mohawks teams will compete in the President’s Cup U9 Festival this weekend, with the U9C Mohawks hosting at the Kahnawake Sports Complex (KSC) on Sunday, with games at 9 a.m. and noon.

“It’s fun to host games at the KSC,” said U9C coach Travis McComber. “The kids have a chance to play in front of more of their family members, and they have a lot of fun.”

It will be the U9s’ first – and last – tournament of the season after previously scheduled competitions had to be cancelled due to COVID-19 disruptions.

“Once we are presented with medals after Sunday’s games, we will be done and looking forward to next season,” said McComber.

Kahnawake also has at least one player competing in the Dodge Cup, which features regional winners from across Quebec. Ie’nahkwenha:wi Rice plays on the Peewee A Mont-Royal Outremont (MRO) girls’ team that finished first in their division before making their regional tournament.

The MRO Banshees won their first game of the tournament 3-2 on Thursday morning against the Tigers of Victoriaville.

They will next play at 5 p.m. today, Friday, against an opponent still to be determined at deadline.

The Dodge Cup runs April 7-10, with all games played in Plessisville, Quebec.