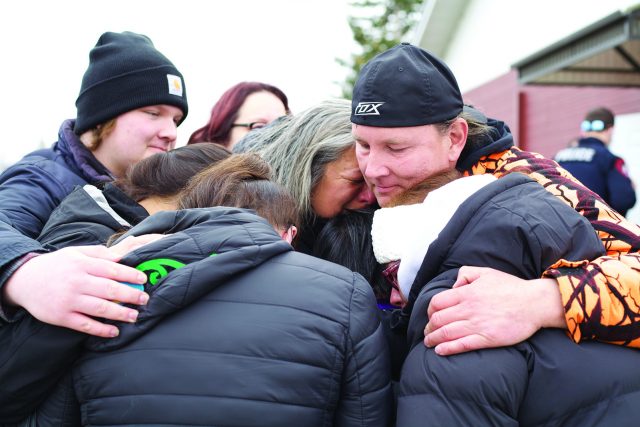 “I’m just sitting here thinking about all the ones who couldn’t come forward,” said Patricia Kaniente Stacey, tears streaming down her face. “But it’s over now, he’s going.”

Stacey had been sitting outside of the Golden Age Club for two days, where a community poll was held on March 25 and 26 to determine whether the remains of the late father Léon Lajoie would be exhumed.

Members of the community, who’ve supported Stacey since she came forward with allegations that Lajoie sexually assault her as a child, rushed to her side when the poll’s results were announced on Saturday.

“My legs went limp,” Stacey recalled after the announcement. “I felt somebody rubbing my back. Then somebody said we won.”

Stacey said she felt compelled to share her story after children’s’ remains were uncovered at a residential school in Kamloops, BC last summer. Since then, others have joined Stacey with allegations of their own, leading to a call for Lajoie’s remains to be removed from the community.

The demands prompted the Mohawk Council of Kahnawake (MCK) to launch in-person community consultations and an online survey in November, which found that community members felt a poll was necessary to determine whether the remains should be exhumed.

A week before the poll was held the executive summary of the report from the investigation into the accusations was released. The report said that the investigation’s findings did not substantiate any allegations of sexual misconduct by the late priest.

It also stated that only three alleged victims were identified, despite the fact that a community protest group said that up to 20 individuals had come forward to them with allegations.

Several residents questioned whether the investigation was conducted objectively, given that the firm that conducted it was commissioned by the Jesuits of Canada.

“Who the hell (hires the firm to) investigate their own case? It doesn’t make sense,” said Fran Beauvais. “How could (the investigation) be unbiased?”

“The Jesuits of Canada have made it clear that if the Community plebiscite should be in favour of repatriation, that they would arrange for the reinterment of Fr. Lajoie at the Jesuit Cimetière des Jésuites in Saint-Jérôme, Quebec, and cover both the legal and other expenses,” the Jesuits said in a press release.

“Our immediate steps will involve consultation concerning the processes that will be involved in the repatriation and the impact that this may have in the Community.”

Others at the poll said that a bigger issue was the lack of consent for Lajoie’s burial in the territory to begin with. They said that the issue could have been avoided if former band council members had sought community consensus before they allowed his burial on the reserve in 1999.

“There are full-blooded Mohawks – especially women – who couldn’t be buried here because they married out,” said resident Timmy Norton after casting his ballot Saturday. “But here, a non-Native is buried right under our noses.”

Some in the community took issue with having to participate in a poll at all, given that it was at odds with Kanien’kehá:ka tradition.

Melissa Montour-Lazare, spokesperson for the community group calling for Lajoie’s exhumation, said the group had no other choice but to engage with non-Indigenous systems.

“We don’t believe in voting,” said Montour-Lazare. “But if push comes to shove, this is the only option we’ve got, so that’s what we have to do.”

MCK chief Tonya Perron acknowledged that voting isn’t the Mohawk way, but it was one of the tools to get a good read on the pulse of the community for this issue.

“The Council is aware that we need to have a community engagement plan,” said Perron. “We’ve been working on policy so that moving forward we can proceed in that manner rather than just with voting.”

On Monday, the MCK announced that the Jesuit Order has confirmed they would respect the results of the poll and that discussions to begin the legal process for Lajoie’s exhumation have begun. The release confirmed that the Jesuits would be absorbing all related costs, and said it would keep the community updated on the next steps.

Perron did not yet have details on a timeline but said the Council was committed to ensuring that the exhumation would be carried forward. She also said the poll’s results didn’t come as a surprise given how split the community had been on this issue.

“This has been a very difficult period for our people and we are aware that the results of this poll may have provided resolution for some, whereas for others it has caused great pain,” Perron said in the release. “We only hope that the path moving forward paves the way for healing for everyone.”

Healing was a sentiment shared by many participants in the poll. They said the issue had sown division in the community, but it was up to residents to move forward together.

“We have to unite and let go of the past,” said resident Sandra Deer. “But if we don’t acknowledge one another’s truth, that past will never be healed.”

Outside of the Golden Age Club on Saturday, Stacey wiped away tears as she looked around the group of women she had been fighting alongside since the summer.

“I couldn’t have done it without all these people,” she said. “We didn’t give up, and we’re going to keep going until he’s gone.”