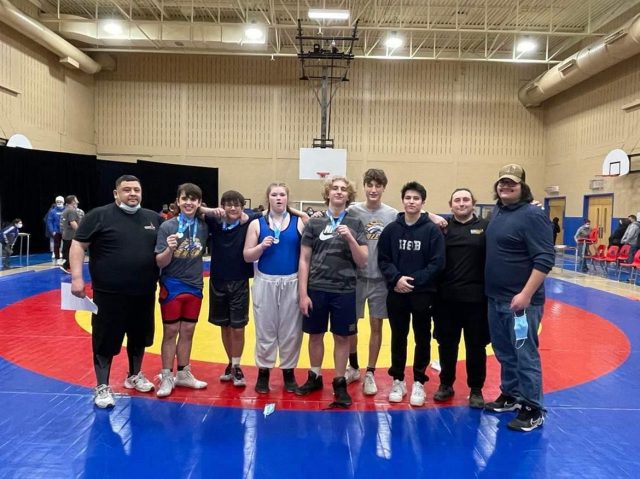 Howard S. Billings High School wrestler Gabriel Ouellette-Whalen had no experience when the captain of the wrestling team, Nicholas Elliott, suggested around Halloween that he try out for the squad.

Ouellette-Whalen is one of the smaller guys on the roster, according to his coach, Kahnawa’kehró:non Peter Montour. The strength and size of the others were a persistent obstacle at practices, but the 10th-grader was undeterred.

On March 26, mere months after starting, Ouellette-Whalen emerged from behind a black curtain at P.G. Ostiguy Secondary School for his gold-medal match at the Greater Montreal Athletic Association (GMAA) wrestling championships.

The host had set up smoke machines for the finals. Flashing lights illuminated the fog in red and purple, emulating the excitement of Monday Night Raw as Ouellette-Whalen came running into view for the Olympic-style match.

Much of his family looked on, his mother proudly streaming the competition on Facebook for those who couldn’t make it.

“It was really exciting. I wasn’t expecting it to be as interesting as it was,” said his mother, Andrea Ouellette. “It was really cool.”

The adversaries circled the mat before the contest finally began.

Ouellette-Whalen tried to grapple his opponent but was repeatedly batted away. In a rush of annoyance, he grabbed the other wrestler and took him to the ground, pinning him.

“He’ll be a role model for kids coming up in the future. I can use his story as one to get kids to join up.”

Billings brought a small team to the championships but had a strong showing, with three silver medals and a bronze in addition to Ouellette-Whalen’s gold, leading to a fifth-overall finish.

“If you need help, he’ll help you,” said Ouellette-Whalen of Montour. “He’s always there. He’s a good coach.” He is also grateful to his other coaches, Jersey McGowan and Otiohkwanoron Montour, Montour’s son.

“Without those coaches, I don’t think I could have made it to the finals and gotten gold,” said the 16-year-old.

He has found not only glory on his new team but a new passion and new friends, too.

“Coach Pete, he said we’re all family, which is kind of true,” said Ouellette-Whalen. “We do everything together, basically. Being together and being a family is big on the team.”

Eight schools competed in the GMAA championship, the first held since the 2019-2020 season. Usually, around 10 make it out.

One glaring absence was the storied Kahnawake Survival School (KSS) wrestling team, which dominated the sport for many years.

“There were times we’d win the GMAA championships before the first whistle was blown in the finals because the teams were so powerful,” said Montour of the KSS team, which has been active since the early 80s.

He still remembers his own experiences finding camaraderie – and adversity – when he started wrestling at KSS.

“I was the little kid, and they were all the big guys. You’re afraid, but at the same time, you’re part of this gang of guys,” he said.

He said he has pictures over the years of wrestling and later coaching the KSS team. In the stands, faces grow older. Wrestlers become proud parents of wrestlers.

“You should have been seeing the parents come in and watch their grandkids starting,” said Montour. “We’re getting that far along the line now. It’s just sad to see. I wish they were there. They should have been there.”

The KSS wrestling team made the decision not to move forward with the GMAA competition this year when the Omicron wave hit, deeming it unsafe due to the risks posed by both the virus and poor conditioning as a result of the pandemic’s sputtering impact on training.

Concerns about conditioning are one reason the competition was pushed back, according to Montour. The tournament would usually be held in mid-February.

Montour is proud of his wrestlers for persevering through disruptions to the season.

“Here they come training, they started in September, October, November, and they worked out, and then in November the government pulls the rug out from under us again, and we get locked down,” he said.

When things opened up in late January, the GMAA championships were still in question, according to Montour, but while some independently planned wrestling meets were scrapped, the championships were able to move forward with a good deal of participation.

Billings did not have any Kahnawa’kehró:non wrestlers to send to the competition, but Montour hopes that will change as the Billings team makes a name for itself.

PGO beat out Selwyn House with a close 46-44 score for the championship.