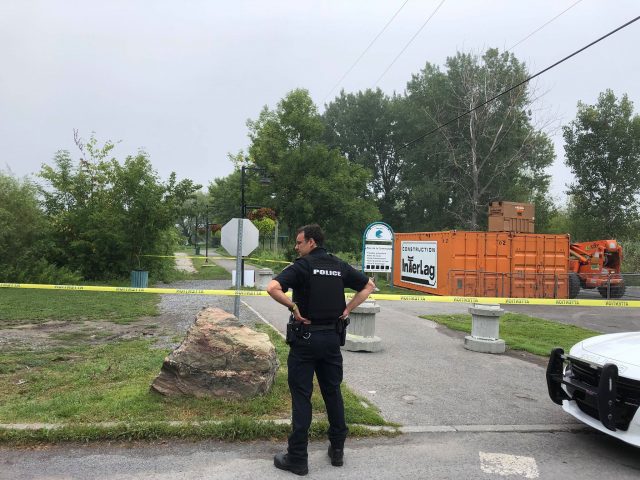 After being charged for the murder of Kahnawa’kehró:non James “JR” Richard Curotte, 30, in August 2020, Justin Moore was released from custody and the case was dismissed.

During the March 4 hearing at the Valleyfield courthouse, judge Marie-Chantal Doucet dropped the murder charge against Moore, 23, because she determined that there was insufficient evidence to take the case to trial.

“The judge was not convinced there was enough evidence regarding the identification of the perpetrator,” Crown prosecutor Marie-Ève Côté told The Eastern Door on Wednesday.

Côté said she was disappointed with the outcome of the case and that if new evidence was introduced, the Crown could move to reopen the case. “We will be meeting with the family Friday (today) to discuss the ruling,” she said.

According to court documents pertaining to the judge’s decision, the murderer’s identity was disputed because there was not enough evidence to prove that Moore was the one who shot and killed Curotte.

“The prosecution submits that the accused is the murderer based on a series of circumstantial elements that place the accused and the victim near the scene of the homicide at the time that shots were heard,” reads the document.

In fact, all of the evidence presented during the preliminary hearing was circumstantial, and no one witnessed the murder. Moreover, the murder weapon was never found, and no cartridge casings were ever retrieved from the crime scene.

“In this case, even if the prosecution’s evidence is believed and by accepting the inference most favourable to the prosecution, a jury cannot infer that the accused is the murderer,” reads the decision.

In her decision, Doucet stated that even though the evidence established that Moore and Curotte were near the murder scene when it occurred, the evidence is “silent” on what happened when they arrived at the park where the crime transpired.

She goes on to write that the scene of the crime revealed very little and that there was no evidence that Moore had a weapon when he was at the park.

Additionally, no DNA was able to link Moore to Curotte or to the crime scene. The document also noted that the court noticed that several people were reluctant to testify, leaving the court “perplexed” about the information they possessed.

Another aspect that the Crown was not able to prove beyond a reasonable doubt was that the killing was planned and deliberate.

In her decision, Doucet stated that given the court’s conclusion on the identity of the murderer, “it is inappropriate to characterize the murder.”

According to the judge, the characterization of a murder is based on an analysis of the intention behind the act, which means weighing the advantages and disadvantages of planning the homicide. But in this case, the evidence does not connect Moore directly to the murder, thus making it impossible to know whether it was premeditated or not.

“After analyzing all of the evidence, the court finds that the evidence is insufficient to order the accused to stand trial. The accused, therefore, is discharged.”

“I heard he was released, and I was furious about that,” said Wahienhawi Horn, Curotte’s ex-partner and mother of his 10-year-old daughter Waheshon.

According to court documents, Curotte and Moore knew each other and were seen together in the hours before the murder.

“I am not going to walk away from this injustice,” said Valerie Curotte, an aunt who helped raise JR. “I kind of knew that something like this was going to happen when they turned around and imposed a publication ban,” she said.

Back in November, during the preliminary inquiry, the judge issued a publication ban.

“They were meeting behind closed doors. They said that they were going to see if there was enough evidence to go to trial. And I knew right then and there that something was going on. It was my first indication,” said Valerie.

At 8:14 a.m., an officer arrived at the park and found Curotte’s body lying face down on the ground. The officer tried to resuscitate him, but the Kahnawa’kehró:non was declared dead at the hospital.

Valerie was not at the March 4 hearing, but said that other family members, including Curotte’s mother and older sister, were present.

Additionally, she believes that the killing was racially-motivated and doesn’t understand why and how the case was dismissed.

“It doesn’t make sense. I know what transpired, they kept saying… they referred to him as the ‘Indian.’ I don’t care how they spin it,” she said.

“It’s hard because, in life, he went through so much injustice and now even in death. My fight is not over. I am not just going to let him walk away free. There’s got to be answers. We need to know why. What the hell happened?”

She said she is consulting a lawyer to figure out the next legal steps.