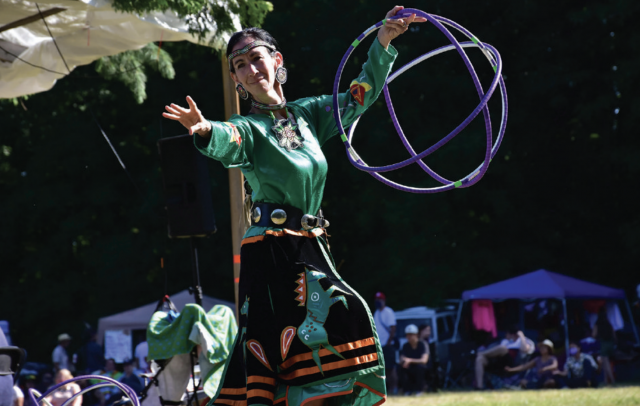 The Echoes of a Proud Nation Pow Wow will take place this summer for the first time since 2019, organizers have announced.

The return of the powwow, which will run July 9-10 on Tekakwitha Island, is the latest sign of a return to normalcy for Kahnawake after two years of pandemic life.

“I think it’s time. I think we need it,” said Lynne Norton, who sits on the Echoes of a Proud Nation Kahnawake Pow Wow Committee. “It’s a bit scary. We don’t know how it’s going to go.”

Despite concerns that COVID-19 has proven to be unpredictable in its ebbs and flows, the committee decided at a Tuesday evening meeting to forge ahead with the event in 2022. Organizers acknowledge the need for precautions and contingency plans, but predict the event will look similar to previous years.

“It’s for sure going to be happening,” said Kimberly Cross, tourism development agent at Kahnawake Tourism.

Discussions will unfold in the coming weeks and months as the committee establishes contingency plans and decides on precautions, such as reducing the use of cash at the event in favour of electronic payments.

The committee still expects to welcome visitors from outside of Kahnawake for the powwow, which is a major tourism draw for the community, although the details still need to be hashed out. Because of limitations to international travel, organizers are expecting only domestic travellers.

About 8,000 spectators visit the powwow in a normal year, according to the powwow committee.

“We’re really looking at how we can improve and make it safe and fun for everyone,” said Cross.

“For a lot of people, it’s really going to be a time where we get to see a lot of our community members again,” said Cross. “Sharing of food, sharing of stories, being together – it’s a really big deal.”

The upcoming iteration will be the powwow’s 30th annual event. For many people, it has become a family tradition that they are excited to honour once again.

“I went every year as a child, and my favourite part was listening to the drums and singing – so powerful,” said Katsitsano:ron Hamelin. “I watched the powwow grow bigger and bigger each year, and now I’m very excited to take my baby girl to her first powwow!”

Organizers have already begun the process of reaching out to past vendors to get them on board.

“We’re excited. Everybody’s excited,” said Gina Jacobs, manager of local business Sequoia, which sells bath and body products that are inspired by Indigenous legends, stories, and medicines. The store typically has a booth at the powwow.

“It’s invigorating for not just the economy but the people in the community and the people outside who like to come and visit and love to watch the dancing and engage in the social, cultural, and other aspects of Kahnawake life,” said Mike Delisle Jr., lead portfolio chief for economic development at the Mohawk Council of Kahnawake (MCK).

As usual, performers such as traditional drummers and dancers are expected to feature heavily in the celebration.

Owen Skahionwiio Mayo, an Iroquois smoke dancer and woodland dancer, got involved at a young age when his parents brought him to the powwow.

“They couldn’t get me out of the dance arena,” he said.

An elder encouraged his mother to get him regalia, and he got increasingly involved.

“Powwow is something very special to me. It’s something that makes me feel powerful and proud, knowing that our ancestors are looking down at us, trying to reconnect to something that was lost,” he said.

“Although powwows don’t originate from my people, it’s a powerful feeling knowing that majority of the tribes on Turtle Island are dancing as one,” he said. “To the same song.”