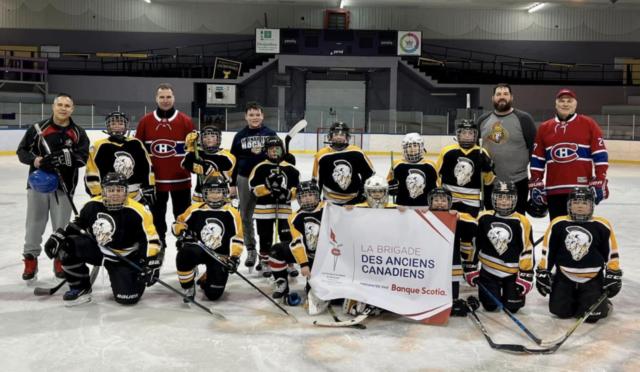 With only a little over a week left to earn Kraft Hockeyville “rally points,” Tammy Whitebean will be among the Kahnawa’kehró:non to take to the streets on Saturday, March 26, to give the effort a boost.

Whitebean has nominated the Kahnawake Sports Complex for the annual Kraft Hockeyville competition for five years now, and with things going better than ever, it’s no time to be shy.

“It’s gotten a lot further than before, so oh yeah, I’m going to be screaming and yelling and everything else,” she said.

Community members will meet at the parking lot of Karonhianónhnha Tsi Ionterihwaienstáhkhwa at 11:30 a.m. on Saturday for a sprightly walk to the arena. The idea is to use the occasion to make a video that will show the contest’s judges what hockey spirit in Kahnawake is all about.

“I’d like to see a lot of community members come together to show their support,” said Whitebean. She suggested Kahnawa’kehró:non come in their team jerseys and bring hockey sticks or signs to help buoy the bid. She’s been searching for her father’s old jersey to wear to the event.

Communities around Canada are hopeful for their local arenas to be awarded the grand prize – $250,000 for upgrades and a pre-season National Hockey League game.

The final four will be chosen in part according to “rally points,” which communities can rack up in a variety of ways, including by posting photos and videos to show their enthusiasm for the arena.

“More people are submitting photos and stories than what we had in the previous four years, so there’s more participation this year,” said Whitebean.

Her effort has won the attention not only of residents but also organizations in town, and the Sports Complex itself has become involved.

“We’re so happy that community members would try to improve our facility because it shows how much they love it and how much time people spend here,” said MacKenzie Whyte, interim director of the Sports and Recreation Unit.

“It really is the heart of the community, especially during hockey season and lacrosse season.”

She hopes Kahnawa’kehró:non flock to Saturday’s show of support and help give Kahnawake the best possible chance to win what is sure to be a competitive contest.

The arena would likely use the money to make the facility more accessible. “It’s great that everybody wants to come and be a part of (the sports complex), but it would be even greater if individuals with mobility issues could also take part,” said Whyte.

Attendees on Saturday will get a glimpse of the Kahnawake Fire Brigade’s orange-wrapped Every Child Matters engine, which will be brought out for the occasion.

“We’ll absolutely always support organizations in town that are trying to (get) better,” said fire chief David Scott. “Better equipment, better buildings, whatever they’re trying to do. If we can do it, we’ll be there.”

Whitebean even managed to make inroads at the Mohawk Council of Kahnawake, with some chiefs throwing their support behind the effort.

“I thought it would be something good for the community, and we jumped on board,” said MCK chief Harry Rice, who plans to attend Saturday.

“It’s a win for Kahnawake regardless of if we come out on top or not because it brings the community together,” he said.

Kahnawa’kehró:non have until April 3 to contribute stories and earn rally points on the Hockeyville website before nominations close.