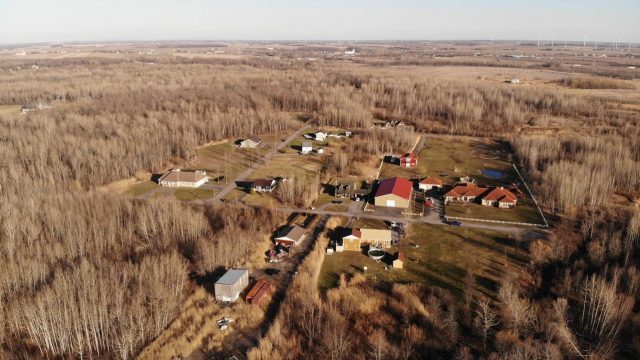 Iohahiio Delisle was lending a hand at Cabot Square in Montreal, where the Raphaël André Memorial Tent offers warmth to those without shelter, when he encountered a Kahnawa’kehró:non man in his 30s who was homeless and suffering from an opioid addiction.

Delisle was among the people who helped the man through detoxification – the initial phase when a person stops taking drugs, sometimes triggering potentially dangerous withdrawal symptoms – and ultimately into treatment.

“Basically, the responsibility fell into my hands where I had to be a liaison, between getting him secure in a hotel room, monitoring him, being his go-to guy for the medication that was prescribed from the doctor at the hospital,” said Delisle.

He described the experience to his friend Carla Diabo, who has also been helping community members through detox.

“When Carla came to me, and she’d had a similar experience, it was like, ‘Here we go, let’s get it going then,’” he said.

In Kahnawake, a community that has suffered overdose deaths in recent years and has been subjected to traumas that can put people at risk for substance abuse, many community members yearning to rid themselves of drug addiction have little option but to go cold turkey, alone.

This is why Delisle and Diabo are working on opening a seven-bed traditional detox therapy clinic in Delisle’s 2,400-square foot barn.

It will operate as a non-profit, and the pair are currently in the process of seeking funding and forming an elder advisory committee.

“It’s a community responsibility, and we sometimes point the finger and say ‘Go over the Mercier, go over the bridge and find an organization that’s going to help,’” said Delisle.

“I think it’s so important that our community start looking at solutions or ways, innovative ways to define and explore what a traditional healing process can or should be,” he said.

The centre will offer seven day stays to clients. The goal is to help them get over the withdrawal period to enable them to make a clear-headed decision to seek treatment.

The facility will be called the Red Willow Detox Centre, a reference both to the disciplinary and medicinal histories of the red willow.

The name was thought up by Diabo, a community member whose personal efforts to help people detox have proliferated by word of mouth.

“Red willow, it grows together,” she said. “It’s never just one strand by itself.” It grows every year, she said, and it can be picked over and over.

She said she already has a waiting list of 17 people who could benefit from the centre, which is planned to open in mid-to-late summer. According to Delisle, many are under the age of 18.

In a secluded location surrounded by nature, clients will have access to gardening, a skating rink, and a sweat lodge that will be used with an experienced spiritual advisor.

“It’s like we’re going back to our roots where we’re taking care of our own people,” said Diabo. “We want them to remember who they are. We want them to embrace their spirituality and their roles and responsibilities as Onkwehón:we people.”

While the emphasis is on traditional medicines and techniques involving local healers, the founders accept that some western medicines will be needed considering the nature of certain substances.

The Kahnawake Fire Brigade will also be aware of the centre’s activities in case medical transport is needed.

The prospective centre has at least one supporter on the Mohawk Council of Kahnawake (MCK) in chief Ryan Montour, who last month updated Council about his discussions with the centre’s proponents.

“It’s an asset to the community to have our own traditional detox centre. It’s filling a void,” said Montour, who sits on the board of Kahnawake Shakotiia’takehnhas Community Services (KSCS), which offers addiction services.

He said he knows of countless people who have gone cold turkey by themselves at home with no supervision, whether because they wanted to quit or simply couldn’t afford their next dose.

“For this to be in a controlled environment, with 24-hour security, with traditional medicines – it’s something that is better than nothing,” he said.

“We can’t afford to wait for the hospitals and the other organizations in town to build this,” he said. “Our people are dying.”

While Montour spoke at Council about the initiative, he insists his involvement is in a personal capacity rather than a political one, and he hopes to help counsel the facility’s clients. His own history of drug and alcohol abuse fuels his desire to contribute.

“Where I come from – it’s a real healing journey, my story. If I can use that to even save one person, I will do it, and I continue to do it on my own free time,” he said.

He noted there are many people in the community who have given up drugs or alcohol and are now leading by example and helping others.

KSCS has seen an increase in requests for addiction services, reflecting predictions by experts worried about the impact of the pandemic.

“As restrictions are being lifted, it kind of does make sense that people are starting to reach out more for help in that area,” said Nancy Worth, supervisor for addiction services at KSCS. “It also helps speak to the fact that the pandemic, the restrictions, the isolation, it speaks to the level of how people have been affected, and how they’ve struggled with COVID.”

While she could not speak specifically to the proposed detox centre, Worth acknowledged the need for more resources for addiction in the community while stressing the need for Kahnawa’kehró:non to offer one another a sense of belonging and understanding.

For Delisle, Red Willow will be all about bringing community members back into the fold.

“It’s something that is needed more so now than ever before, to constructively remind our community of responsibility and getting our community back to that circle.”