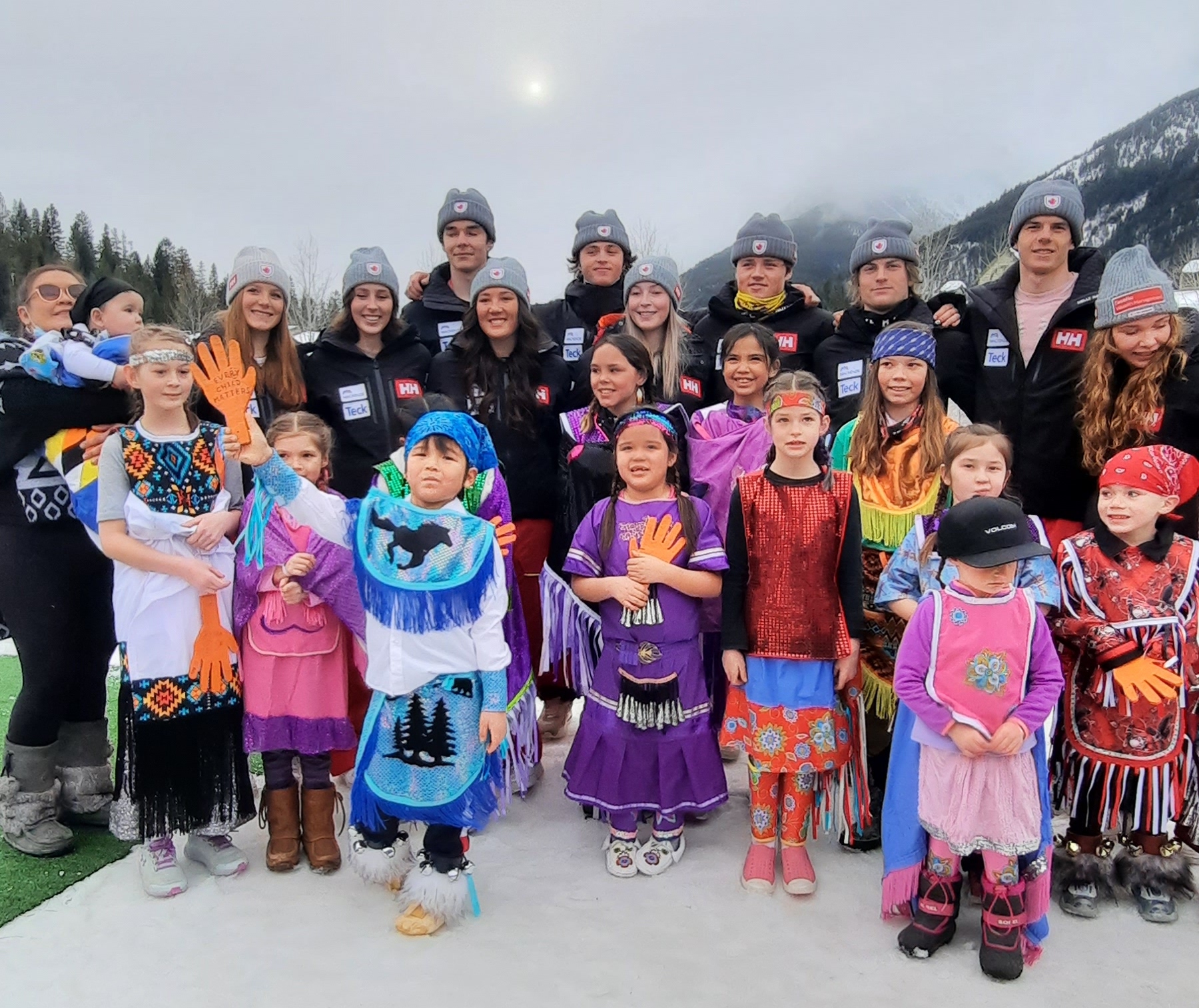 Linda Hemlock had never made regalia until two months ago.

When the Shuswap woman living in BC caught word that kids in her community had been invited to dance at the Alpine World Junior Championships, she was determined to lend a hand.

“With all those athletes coming to our little village, it was a chance to push Shuswap culture out and show them that we are here and have been since before any settler arrived,” said Hemlock, of the event at Panorama’s Ski Resort in southeastern British Columbia.

Combining their efforts, experienced sewers and mothers who were eager to learn created outfits for the 13 youth who performed at the championship opening ceremony on March 3.

Greeted with cheerful smiles, the group aged between seven months old and 25 years old stepped out to the meeting point at the base of the Purcell Mountains to dance in their vividly-embellished regalia.

Over 200 of the world’s best junior ski athletes from countries including Norway, Italy, Sweden, Germany and the United States watched the youth perform traditional dances.

“There was a lot of tears of joy while watching the pride that they had out there while dancing and showing the culture and tradition of Shuswap and other Aboriginal people,” said Clarissa Stevens, who also assisted with regalia-making. “It’s something I’ve always loved doing, and they were the greatest group.”

Since her now 25-year-old son began to dance at the age of two, Stevens has been committed to creating all his outfits from scratch. Tossing patterns aside, she developed a simpler technique that she heartily shares with women and mothers interested in making regalia.

Headbands, moccasins and jingle bands – the mother put together every part of her son’s outfit.

“When I first go into (projects) like this, I don’t think about who I’m doing it for besides the children and the mothers involved,” she said. “But this was a really good opportunity for outside communities nationwide to be able to see this – Aboriginal cultures and traditions haven’t been shown enough.”

In addition to the customary pieces worn by traditional dancers at powwows, each youth also had a cutout orange hand, which they held up at the end of their performance.

“It was a symbol to let the world be aware of the residential school uncoverings,” expressed Hemlock. “There are well over thousands of children who have already been found and, unfortunately, none of them are alive. We wanted to stress that today, and every other day, it’s every child that matters.”

The idea suggested by a community elder resonated with the group, including Hemlock, who noted how rampant the federally-funded system was in Western Canada.

“The Shuswap people are struggling to learn their ways because of residential schools and the Sixties Scoop when all of that (culture) was forbidden, and no one could practice or learn traditional ways,” she said.

A residential school survivor herself, Hemlock spent her childhood in Kootenay Indian Residential School before she and her siblings were placed in a non-Indigenous foster home away from their community when she was only 12 years old.

It was to flee these darker memories that Hemlock left the province many years ago, before meeting her husband, Kahnawa’kehró:non Hayden Hemlock, and settling in Kahnawake, where she spent the last four decades.

When the pair moved to Shuswap in 2017, she did so, wanting to be with her mother, who was ill at the time. Sadly, Hemlock lost both her mother and a brother who died only eight months apart.

Resilient, she strived to pursue the other goals that brought her back to her community.

“Most of all, I came back to start learning my own language and culture after I lived away for over 40 years,” said Hemlock. “When I moved back here, I told people that I would one day put this little reserve on the map and show the world who we are as a nation of people. I think the best way to do this is through the children.”

This feeling was echoed by Stevens, who stressed the importance of instilling a sense of dignity in future generations.

“The kids and youths are getting lost because they’re trying to fit in the outside society when that’s not really for them – this is about trying to teach them about where they come from so that they have pride in what they do,” she said.

As the first world junior alpine championship to be held in Western Canada made history, so did the Shuswap people and youth who marked the occasion with pride.

“While communities outside are getting bigger and bigger, I say why don’t we try and push our cultures and our ways outside to show everyone who we are,” said Hemlock. “We need to have our voices heard, we need to be seen, and we need people to finally learn about us.”

Bomb goes off at Knights