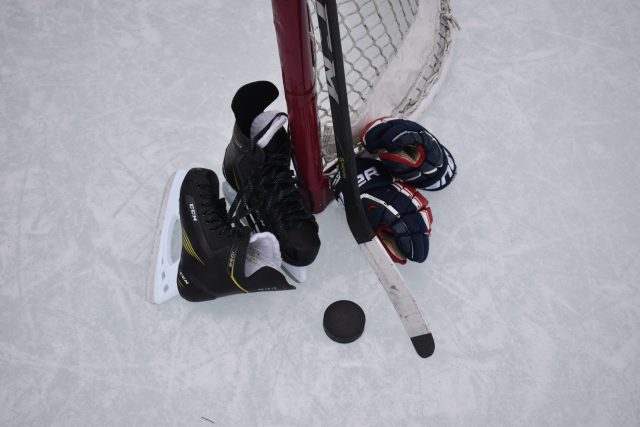 Spreading their love for hockey, a group of Kahnawa’kehró:non are bringing an initiative to town that will allow more community youths to enjoy the sport.

Last week, he found out that the submission for the Rapids River Hockey Kahnawake project had been approved and that the community would be receiving 25 sets of hockey gear for youths aged 18 and below.

“This equipment will be for kids who want to play the sport, but whose families don’t have the means to be able to afford all that equipment since it can cost up to $1,000 just to suit up a kid,” explained Stacey.

As a minor hockey coach, a player with the Cornwall Senior A Prowlers and a father to two hockey athletes, the Kahnawa’kehró:non is well informed about the hefty price tag that goes along with practicing the winter sport.

“To just start a kid new, you’re looking at $500 to $1,000 alone depending on the equipment you buy,” he said, noting that there are also registration fees to consider. “It’s so pricey, and that’s why a lot of people can’t afford to play.”

The project will help to offset those costs while also motivating youth to stay active and join local or nearby leagues.

Coming back to school after the March break, youths will be handed a document for parents to fill out if they wish to apply for a chance to win one of the brand-new sets of hockey equipment.

“If there’s a child who really wants to play hockey but can’t feasibly do it – then this is an opportunity for them to have that chance,” said Stacey. “If families don’t have the money to pay for all that, we want this project to help them.”

While this is his first time dealing with the NHLPA program, the community member said his team is being assisted by another father on his son’s hockey team, who has made a handful of successful requests in the past.

“With all that’s been happening with Every Child Matters and other things coming to light, I wanted to find a way to help a community, in a way,” said Sylvain Lemoyne, who is a former RCMP officer.

In 2002, Lemoyne was an officer stationed in the Northwest Territories community of Fort Resolution, where the Deninu Kųę́ First Nation band is headquartered. It was then that he first applied to receive equipment for youth under the Goals & Dreams initiative.

Shortly after the submission was approved, approximately 30 sets of equipment were handed to youth by former and current hockey players in the league.

“It was such a big success that they approved our submission again the following year,” said Lemoyne. “I’m still in contact with some of the kids who got that equipment – today, they’re adults – some fathers, too – who now are passing on this passion for the sport to their own kids.”

With the Rapids River Hockey Kahnawake project receiving a stamp of approval, this is Lemoyne’s sixth time assisting community youth in accessing the sport.

“If (everyone) had the chance to see the faces of these kids when we hand them their equipment, then they would all understand why it is we’re motivated to do a project like this.”

Between writing a proposal, reviewing applications and coordinating the entire project, Stacey had to recruit additional hands to assist with the endeavour.

His sister Jen Stacey not only has a son who plays hockey, but she also assists with managing and coaching in town.

“I felt it was a great opportunity to bring to our community,” she said. “It’s about being able to introduce a new sport to families who can’t necessarily afford to pay all the costs and helping bring something healthy for our (youth) to do.”

In addition to helping children pursue this sport, Jen said the project will boost the number of players in town – especially for girls.

“Hockey is definitely something we love to promote, and a major focus of this will be to try to get more female players,” she added.

Lending a helping hand to the project was also a no-brainer for Kateri Oesterreich whose son plays with the Billings Blazers.

“I believe that this project can only help the community in ensuring that we get another 25 kids on the ice, fully geared and loving the sport as much as my son does,” she said. “If we can help sponsor some kids into loving that sport – hey, let’s do it!”

With more surprises on the horizon, the project organizers said local organizations will soon be invited to contribute donations that will go towards various aspects of the project. Until then, the group of hockey fans all expressed their encouragement for eligible youth to apply and take part in the team sport.

“Throughout the years, I’ve seen kids who are around the same age pretty much play with the same team throughout their whole hockey career,” remarked Jen. “Not only are they making friends and teammates – but they also become a sort of family too.”