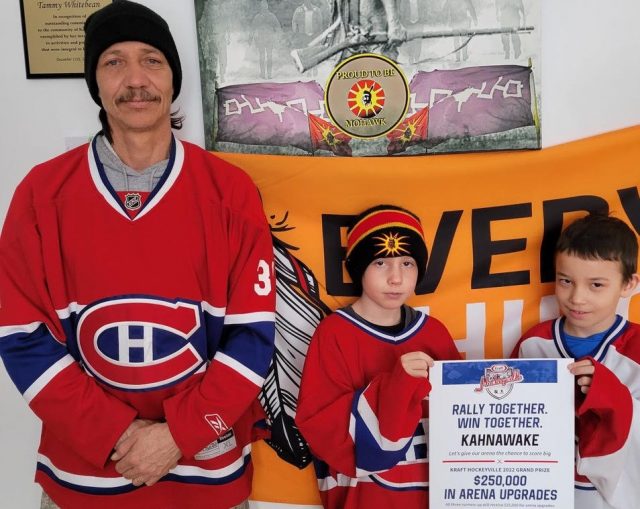 Kahnawa’kehró:non Tammy Whitebean could be seen around town with a stack of posters this week, putting them up at local businesses.

“The next thing is I’m going to be standing out here on the corner and handing them out to the cars,” she said. “I really want to make a go of it this year.”

It’s the fifth time Whitebean has nominated the Kahnawake Sports Complex for the annual Kraft Hockeyville competition, a national contest to award a community arena with $250,000 for upgrades – and a pre-season National Hockey League game.

The competition rewards community turnout, and Whitebean understands better than ever that she and her husband Rickey Diabo need to urge Kahnawa’kehró:non to coalesce around the effort for the Kahnawake Sports Complex to stand a chance.

“I need them all to participate,” she said. “The more rally points we get, the more our chances of winning.”

A panel will judge 80 percent of the score based on “stories” submitted by community members. These should cover Kahnawake’s passion for hockey, personal affections for the arena, and how the money could be used.

The remaining 20 percent is based on how many “rally points” the community racks up. These can be earned, among other ways, by sharing photos and videos on Kahnawake’s community rally page at krafthockeyville.ca.

The judges narrow down a final four, and the rest is decided by a vote. The three runners-up get $25,000 each for their community arenas.

Any contribution would be welcome, according to Mackenzie Whyte, interim director of the Sports and Recreation Unit.

“She’s an old building,” said Whyte. “She could use a little love, and definitely our community members and our youth deserve the best state-of-the-art facility possible.”

The Sports and Recreation Unit is still exploring whether its involvement is needed, but Whyte did not hesitate to praise Whitebean’s dedication to the arena.

“Definitely, we love the fact that our community members are taking the initiative to work on a project like this,” she said.

Whitebean sees her annual effort as a way to bring community spirits up and encourage children to get away from their screens and get active.

“I appreciate everything in my community, so any way I can try to help out, that’s what I’ve
done,” she said.

According to Whitebean, last year Kahnawake came in 25th place with little participation. She believes with more engagement, the community could have a much better showing.

The nomination phase ends on April 3, so residents have until then to put their passion for the arena and the sport to use for the competition.

“It’s got to get out there more,” said Whitebean. “We need more ideas from the community, how we can get people to recognize that this is going on and for them to go to the page and put something in. We need to rally.”