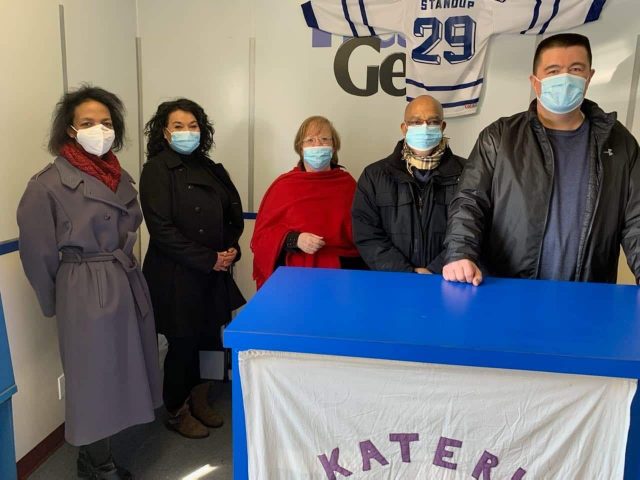 “This whole past year was about hanging on,” said Kahnawa’kehró:non Tonia Williams, who was forced to confront the sins of her church against her own people.

Williams recounted how harrowing it was for everyone in the community after the horrifying news that the remains of 215 children had been uncovered at the site of a residential school near Kamloops, BC.

For someone who credited her catholic faith with helping her overcome difficulties in her life, this was a major blow. On top of all of that, she was also running for a seat at the Mohawk Council of Kahnawake and knew that every move she made and anything she said was open to public scrutiny.

Community members were angry and divided. Some targeted their rage at the church while others, many of them elders, were caught in the middle. The St. Francis Xavier Mission Catholic Church was vandalized multiple times last summer.

Compounding the situation were allegations of sexual abuse brought forth against former priest Léon Lajoie, who died in 1999 and was buried on the territory after working in Kahnawake for almost 30 years.

An investigation into the allegations was recently completed, and community members are awaiting the release of the report by the investigator King International Advisory Group.

Williams said that after the election, she made the painful decision to stop going to church for some time.

“Today, it is like you have to control your mind and your spirit. When it gets too much, I just light my sage, and I say a prayer, and that is my magic,” she said.

While trying to reconcile her feelings about everything that was happening around her, Williams was invited to give a talk to students at a CEGEP in Granby about the intergenerational trauma caused by residential schools.

Although she was terrified because she had always avoided speaking about her childhood and her parents – both survivors of residential schools – she decided to do it.

“Pretty much after they found the 215 children, I started this journey of reconciliation with the church,” said Williams.

“Because there was no apology from the pope, the church really wanted to do something, and their hands were tied, but they wanted to learn more and be proactive.”

The first thing that she realized was that the youth did not know about the residential school system and its insidious goal and its affects on generations of Indigenous people in this country.

“I explained what the Indian Act is and why we can’t create viable economies, what is stopping us and the federal reserve land system, and then I got into what it did to my family and siblings. Intergenerational trauma and a lot of lateral violence. They were shocked.”

Williams then decided to continue giving talks to the youth and also spoke at different church organizations.

Most recently, Williams was invited by father Vincent Esprit (the priest at the Catholic Church) to talk at a virtual conference in December organized by the Montreal City Council, which is under the umbrella of the National Catholic Women’s League.

“I thought I would step forward and allow them to learn about what trauma is. I am not an expert, but I have had counselling, and I wove that into my childhood and what it did to parenting,” she said.

The mom of one said that the trauma that she and her family experienced because of residential schools and, more broadly, systemic racism, had been the “biggest” thing in her entire life.

She said that her therapist made her aware of the concept of intergenerational trauma while they worked through her intense emotional issues. “And it was at that moment that I realized that everything that had happened was not my fault,” said Williams.

“I was raised in foster care as a result of that, and I weave it into what trauma is, so the presentation was about different kinds of trauma and the different points in my life.”

Williams explained that right before she gave her speech, she felt shame because the mostly white audience would probably not understand her family’s struggles.

“There is a lot of lateral violence in my family, so I have always been very careful in how I approach this, but at the same time, it is so important to speak out about it and to educate the community on what that is,” she said.

After she was done with her talk, the Kahnawa’kehró:non said that she instantly felt a weight lifted off her shoulders.

“I remember that I was always talking about my journey with my father, but it was always topical, meaning I never went too deep because of this lateral violence.

“And so, I started to realize that there was this whole big part with my mother who also went to residential school and also harboured a lot of anger and childhood trauma as a result of that.”

Carol McCormick, the president of the Montreal City Council – Catholic Women’s League, said that Williams’ story deeply touched the people who attended the conference in December. She subsequently received messages from members that wanted to get involved and help.

“We need to be able to conciliate with the church. The church has to do its part by coming forward and acknowledging what was done and making sure that this never happens again,” said McCormick.

Attendees of the conference also made donations, and at Williams’ suggestion, the money raised – a total of $605 – was donated to the Kateri Food Basket last week. The cheque was presented by Megan Marinos the president of Pillars Trust Fund – the religious organization that planned the conference

“They gave the cheque to Cory (Rice) at the Food Basket. It was really positive and really represented a step towards reconciliation,” said Williams.

Williams is happy about the small gesture, but understands that it will take a lot more for community members to come together and start to heal.

“I want to advocate because people are suffering, and they put it on themselves and harbouring all of that stress and that anger, and it can lead to violence and addictions and ultimately suicides. But we are resilient,” she said.