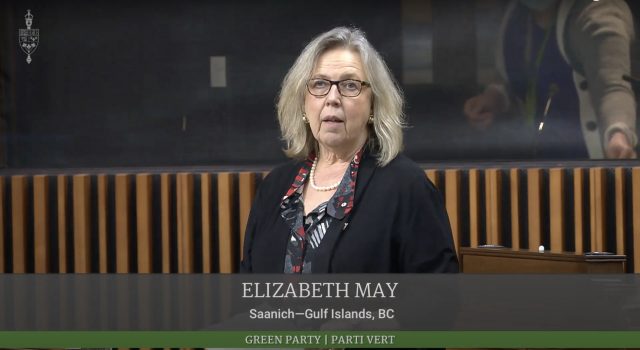 The wellbeing of Kanehsata’kehró:non is driving a debate on environmental racism in parliament.

As the community waits for a concrete rehabilitation plan to decontaminate the G&R Recycling facility, Green Party parliamentary leader Elizabeth May is applying pressure on the federal governments to take action to solve the persisting issue.

“At its core, (this situation) is about environmental racism. It’s about the illegal dumping of toxic waste on Mohawk territory,” said May during the House of Commons debate on Wednesday, February 16. “I cannot imagine any non-Indigenous or non-Black community allowing it, but we do have an environmental racism problem in this country.”

This is the second instance of May standing in front of parliament members to discuss the environmental plight caused by the construction and demolition materials sorting center operating on the territory since 2016.

On December 2, she had asked minister of Fisheries and Oceans Joyce Murray for an update on what was being done to remove the “toxic waste facility” in Kanesatake.

“I think her answer was sound, but we did not have the details,” said May. “The minister (Murray) said that disposing of waste in this manner is dangerous to people, fish habitats and fish, and said that “we will hold any individuals who violate this act to account” – as things progressed, it is clear that the illegal dumping continues.”

An investigation by The Eastern Door released in September shed light on various reports produced by the Quebec Ministry of Environment, which, according to environmental experts consulted as part of this reporting, revealed test results they deemed concerning to the environment, aquatic life, as well as potentially to the health of humans.

“This is an issue affecting our whole community and our members,” Mohawk Council of Kanesatake (MCK) grand chief Victor Akwirente Bonspille told The Eastern Door. “I’m getting calls from community members who are even getting sick from this.”

Urging for tangible solutions, May reminded leaders in the room that the issue remains unaddressed despite G&R having its permit removed in October 2020 and the federal government delivering a directive for the owners to clean the site on November 18, 2020.

“Over the past three years, Environment and Climate Change Canada (ECCC) and Indigenous Services Canada (ISC) have provided support to the Kanesatake Mohawk Council’s environment office to help the community address environmental issues on its territory,” said parliamentary secretary to the minister of ECCC Terry Duguid in response to the former Green Party leader’s question on February 16.

“(ECCC) enforcement officers have completed at least three follow-up inspections at the site, the latest of which was less than two weeks ago. To date, the inspections have found that the company is complying with the requirements of the direction.”

Neither the MCK nor the Ratishontsanonhstats Kanesatake Environment department would confirm whether ECCC had inspected the facility in recent weeks.

Saying that the results of pending environmental assessments are needed to formulate longer-term solutions, Duguid stated that monitoring of the site and temporary surface water treatment solutions, including “pumping as needed” and “ex-situ treatment of contaminated water,” had already been deployed.

While the parliamentary secretary maintained that the federal department is working closely on the file with the Kanesatake Council, ISC and the government of Quebec, doubt was expressed as to whether the issue is being tackled with the same diligence and urgency as issues elsewhere.

Kanehsatake Rotinonhseshá:ka (People of the Longhouse) representative Katsi’tsakwas Ellen Gabriel denounced “the hypocrisy from all levels of governments” who she said aren’t taking into account the bigger picture: climate change.

“I don’t know what it’s going to take to settle this because it’s almost like the people here remain powerless and unable to do anything about what’s happening in Kanesatake,” said Gabriel. “It’s environmental racism simply for the fact that there are no other communities that would accept this standard of waste in their communities.”

However, Bill C-230, introduced by Zan in September 2020, died on the order paper when the writ dropped last August.

Almost identical to the legislation tabled by the former MP, May’s bill would require the ECCC minister to work with interested groups and individuals in developing a national strategy to assess, prevent and rectify harms caused by environmental racism.

Moreover, the legislation would make it compulsory for the federal government to collect data related to cases of environmental hazards with links to race, socioeconomic status and health.

“I hope my private member’s bill, Bill C-226, will be passed soon,” said May when talking about the crisis in Kanesatake during the House of Commons debates session last week. “As the people of this community are saying, enough is enough.”

In a press release issued when the bill was tabled, the Green Party pointed to instances of environmental injustices that affect Black communities and Indigenous communities, including Kanesatake, Grassy Narrows and Aamjiwnaang First Nations in Ontario, Shamattawa First Nation in Manitoba, and oil sands in Alberta.

“The climate crisis, environmental degradation and social justice issues have the same root cause,” said the party interim leader Amita Kuttner. “We must address colonialism and white supremacy as part of the systemic transformation needed to preserve a liveable world.”

With mounting pressure for governments to clean the recycling site, Bonspille maintained that all actors involved in the troublesome situation affecting the community should be held accountable.

“For years, the federal and provincial governments knew about G&R, the contaminants and the waste being dumped there. Along with the owners, they (governments) need to take accountability and responsibility for this,” said the grand chief. “They have a fiduciary duty and a duty to honour the Crown when it comes to helping and taking care of First Nations in issues that can affect our health and wellbeing.”

As he further reassured Kanehsata’kehró:non about the Council working diligently on the file, he also expressed that actions will only advance as quickly as governments allow them to.

In the meantime, Gabriel expressed her disheartenment in witnessing construction companies from Montreal and surrounding regions disposing of their waste on the small amount of land her community has left.

“The fact that the government is continuing (to allow) these colonial processes is giving permission for people to make decisions that affect all of us without our consent,” said the Onkwehón:we rights advocate. “It’s all really sad to see what is going on in our community (because) this sets the stage for other Indigenous communities when it comes to land protection and land back.”