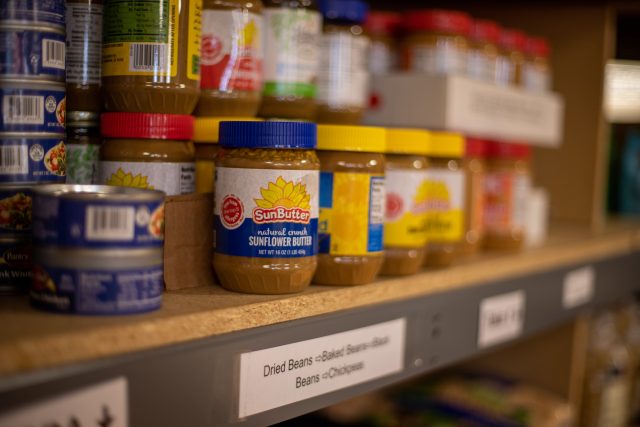 While the pandemic drags on, food insecurity remains a prominent concern across the country.

Community members in Kanesatake weren’t spared from the growing food crisis, which was further aggravated by the widespread worker shortage and job loss exacerbated by the impacts of COVID-19.

As a solution to counter this issue, the Kanesatake Health Center (KHC) launched a food bank offered to the community every Friday since the summer of 2020.

“There was at least 30 and up to 50 people sometimes every week who would come to the food bank – they would come as big families, and there was a lot of elders too,” said Jadyn Lauder, Child and Youth Program coordinator for the health center. “You just knew that a lot of these people needed this – especially with the price of groceries these days.”

However, the service offering fresh produce and other essential foods to Kanehsata’kehró:non in need of additional support has been halted following an announcement by the KHC stating that there would be no food bank “until further notice.”

Newly-appointed health centre executive director Teiawenniserate Jeremy Tomlinson said that there were many factors that led to the temporary closure of the food bank.

“What’s important to note is that the employees that were managing the food giveaway are employees from other (KHC) programs that were doing this in line with the shift of responsibilities due to the pandemic,” explained Tomlinson.

“But the primary reason for this (decision) is that as of February 28 – so coming up very shortly next week – all employees of the health centre are coming back to their regular duties in terms of program and service delivery.”

The return to original duties and in-office work is following a recent announcement by the Quebec government that the telework requirement will be ending on February 28.

Prior to the easing of certain health restrictions in place, Lauder said that the roles of some employees at the KHC significantly shifted.

“We were redirected to different tasks during the pandemic since our (regular) jobs weren’t necessary because we couldn’t even animate programs anymore,” said the coordinator, who was one of the staff members assigned to operating the weekly food bank.

Shortly before the KHC made their announcement on February 16, Tomlinson said a feud on social media had incited rumours about the conditions that led to the closure.

In a Facebook post that has since been deleted, Kanehsata’kehró:non criticized non-locals for using the service, which they argued belonged only to community members.

“A lot of people don’t know this, but the food comes from Moisson Laurentides, which is part of Food Bank Canada, and they have regulations to abide by,” noted the KHC director. “Their requirements (include) that food giveaway should be open to anyone living within our postal code area – including non-Kanehsata’kehró:non.”

Operating with a similar format, the Comptoire Alimentaire d’Oka is a service managed by the neighbouring municipality which is offered to all individuals residing nearby.

Diane Angus is in charge of the food desk that runs every Thursday between 10:30 a.m. and 12:00 p.m. at Oka’s recreational centre.

With an average of 20 to 30 clients each week, Angus noted that food availability is currently limited.

“If our numbers increase in the next week or two, and we have an additional 15 people, then I won’t have enough for everyone,” she pointed out, stating that the current food delivery is adapted to the demand, which she said hasn’t drastically changed throughout the pandemic.

Though this is an issue that may arise within the first weeks, Angus explained that this can be rectified.

“It wouldn’t take any substantial time to get our food demand increased if a lot more people start to show up,” said the Kanehsata’kehró:non. “Everyone is welcome to come by!”

While this option is available to community members, Tomlinson emphasized the food bank closure is a situation that is only temporary.

“There’s going to be close collaboration between the KHC and the MCK (Mohawk Council of Kanesatake) moving forward to get a food bank service back on track in Kanesatake,” he said. “With the opening of the new community centre, there will be an area allotted to the food bank, and that (building) should be opening soon.”

The multi-complex building, which will offer support services in areas including addiction, food security, mental health, youth programming and counselling, is anticipated to open sometime in March, according to information received by Tomlinson.

“I think we will be able to get our minds together and roll up our sleeves to see what can be done once that community building opens,” said the director. “At the end of the day, it’s important for the MCK and the KHC to come together to figure out how we can have the food bank running again.”