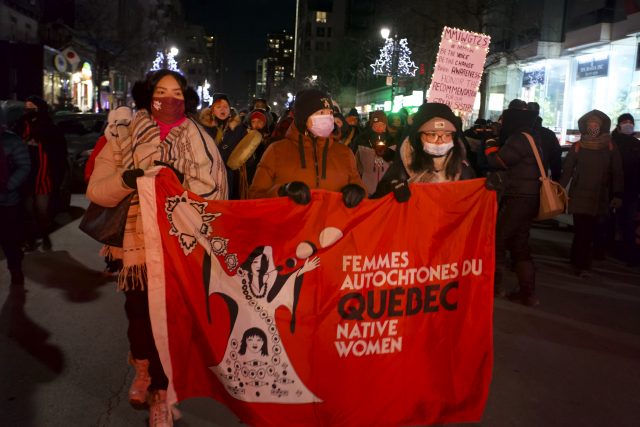 On the day devoted to love, Montreal’s downtown was painted in red.

On Monday, February 14, hundreds responded to an invitation by the Native Women’s Shelter of Montreal (NSWM), the Iskweu Project and the Quebec Native Women to join a vigil followed by a march honouring the lives that have been lost, as well as the families and loved ones who continue to carry them in their hearts.

“The more people who take part in our protests and demonstrations, the more this shows governments that our people deserve the same respect and rights as others,” said Janis Qavavauq-Bibeau, research coordinator at Iskweu. “We aren’t less than because we’re Indigenous, and it’s important for Quebecers to stand by us to show that we matter.”

Defying the bitterly cold night, the crowd gathered at Cabot Square before marching down Ste. Catherine St. while chanting “No more stolen sisters!”

The event marked the 31st annual Women’s Memorial March, which first took place in Vancouver on February 14, 1992, as a response to the murder of a woman in downtown’s eastside.

From the sense of hopelessness and anger felt by the women witnessing these injustices came this march – an act of compassion and caring.

“A lot of people think this is something that happens just out west, but it does happen here too,” said NSWM executive director Nakuset. “The point of today is really about awareness which is a really big part of (the Iskweu) project – providing this information that people don’t know about missing and murdered Indigenous women.”

In the midst of an ongoing human rights crisis fuelled by a staggering rate of violence against Indigenous women and gender diverse people, the Canadian government launched a national public inquiry in 2016.

Denouncing the MMIWG2ST as a “national tragedy of epic proportion,” the final report of the National Inquiry into Missing and Murdered Indigenous Women and Girls was released in June 2019.

The document outlined 231 calls to action directed at the public, governments of all levels, alongside institutions such as media organizations.

A supplementary report specific to Quebec was simultaneously released in order to give particular attention to the issue as it persists in this province.

Kanehsata’kehró:non Cheryl McDonald was among those who offered their testimony to the National Inquiry.

“Did I think I would be testifying in Montreal in March of 2018? That was not part of my plan,” said the Kanien’kehá:ka woman who is also Ahkhwesasró:non. “I’m sick of red tape, I’m sick of bureaucracy, and I’m so angry that I haven’t come out since I testified because the games still go on.”

As she spoke to the attendees listening attentively to her, McDonald denounced systemic inaction and how speaking the truth about her sister Carleen’s death has marked her life.

In the report for Quebec, McDonald’s family said they “had the impression police did not make much of an effort to search for (Carleen).”

Institutional inaction was a recurring subject throughout the march.

“A hot topic here is still that there’s no systemic racism in Quebec, according to (premier) François Legault, while in the meantime there are cases like Joyce Echaquan who died in horrific conditions that prove otherwise,” said Qavavauq-Bibeau. “This wasn’t 10 years ago – it was just over a year ago, and these situations continue to happen.”

Aimed at reducing barriers faced in accessing support and ensuring the proper response from institutions in cases when someone goes missing, the Iskweu Project is also addressing the epidemic through the creation of a database for MMIWG2ST in Quebec.

“By demonstrating that cases of missing and murdered women happen here, then we can prove that it’s a problem,” said Qavavauq-Bibeau, who leads the project. “Right now, there continues to be this denial in Quebec, but we know that numbers don’t lie.”

Leaving no place for doubt, to date, Iskweu’s research has identified more than 200 cases of MMIWG2ST in the province. In contrast, a report released by the RCMP in 2014 found only 46 Indigenous women murdered in Quebec between 1980 and 2012.

“We can’t only believe the work of the police or coroners – throughout the years, we were able to see that they aren’t necessarily the most reliable sources,” said Qavavauq-Bibeau.

Throughout her research, she noted that the deaths of Indigenous women were all too often not given the same attention as those of their non-Native counterparts. Moreover, she explained that her work frequently came across patterns where Indigenous women’s deaths remained inconclusive – oftentimes with cases placing emphasis on substance and alcohol use disorder.

“Everywhere that there are databases, there are many women missing from these numbers,” noted the research coordinator. “I don’t know whether we will ever have the real number of victims.”

To this day, Qavavauq-Bibeau said she still doesn’t know the exact cause of her mother’s death, whom she lost in 2006. In the coroner’s report that she obtained, her mother, who was in her 30s, had her death marked as “inconclusive.”

While no alcohol concentration was revealed in the autopsy, Qavavauq-Bibeau worried that her mother’s case wasn’t further investigated due to her struggles with alcohol and harmful stigmas about addiction.

“There isn’t that effort when you’re an Indigenous woman because it’ll be dismissed assuming that it’s likely due to alcoholism,” said the young woman. “Meanwhile, like so many Indigenous women, my mother faced a lot of domestic violence in her life.”

Also, having lost her grandmother, who was murdered in 2005, Qavavauq-Bibeau expressed that as an Inuk woman who is conscious of how widespread the MMIWG2ST crisis is, she is committed to making a difference.

“I’m trying to be the person who could’ve helped my mother when she was here.”