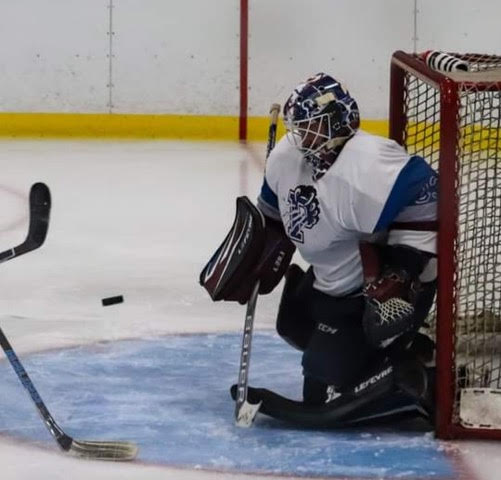 When the Kahnawake Sports Complex reopened three weeks ago, minor hockey coach Mike Stacey was relieved to see the community’s kids once again benefitting from all the sport has to offer.

Now that the 39-year-old has returned to the ice himself, his sentiment is no different.

“Hockey does a lot more than just physically. It’s a lot of mental health, too,” he said. “It felt great to be skating again.”

Stacey plays with the Cornwall Senior A Prowlers in the Eastern Ontario Super Hockey League. The team resumed play on February 5 for the first time since mid-December, when the Omicron wave precipitated a league-wide hiatus.

After getting into shape throughout the pandemic, Stacey was recruited by the team’s owner and coach, Mitch Gagné, who had known him from previous teams.

The league strives to give men 20 and older the chance to play competitive hockey, and Stacey has found a niche for himself as a team leader who plays a physical game.

“That’s what we’re trying to aim for – senior hockey at its best.”

Gagné believes there is a lot of interest in a competitive space for those who end up finishing school or settling down, but still have talent and passion for the sport. The league has grown quickly, up to 12 teams from only four in 2019-2020.

Stacey is now the sole Kahnawa’kehró:non playing for Cornwall after Dylan Stacey, who recently came back from playing in Sweden, was traded at the deadline this week to the Maxville Mustangs.

Dylan Stacey had been part of the 2019-2020 Prowlers team that took the championship in the league’s first season.

“It wasn’t about his talent,” said Gagné. “He has talent.”

Gagné believes Dylan Stacey will likely see more ice time in Maxville, where the team is younger and focused on building for the future.

As for Mike Stacey, the Kahnawake Peacekeeper puts his years of hockey experience to good use on the ice and in the locker room, where others are in their 20s and early 30s.

“It’s almost like having another captain in the room,” said Gagné.

The PK is content to keep playing as long as he is still fit enough to bring his physical style of play to the game and contribute to the team’s success.

He hopes next year more Kahnawa’kehró:non might join him in Cornwall, or at least try out for the team.

“You gotta work for it and just keep on trucking, man.”

With a win and a loss this past weekend, the Prowlers sit third in the East division with an 8-4 record and two overtime losses.

Cornwall plays at home at the Benson Centre tonight, Friday, February 11, at 8 p.m., taking on the division-leading South Grenville Rangers.