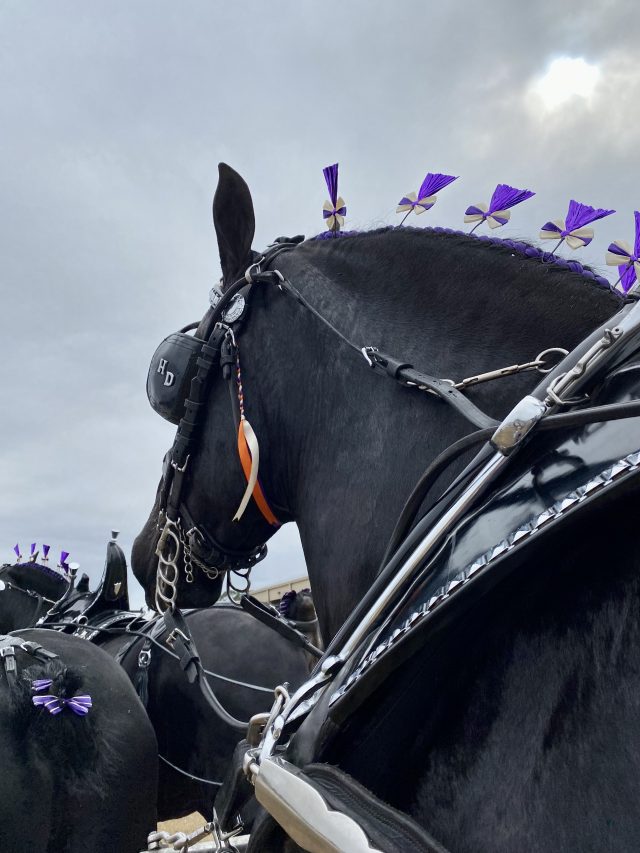 Kahnawa’kehró:non Hannah Deer is down in Ocala, Florida, with the horses of HD Rapids for not one but two draft shows.

After the Grandview Invitational, which took place from February 4 to 6, Deer and her team are just getting started in the Grandview World Nights competition starting today (Friday). Deer said she was very happy with how the horses performed at the first event.

They got a win in the ladies’ cart event, but didn’t manage to carve out other top spots.

“It’s at the judge’s discretion, so it doesn’t always turn out quite the way that you think it should for your horses, but that’s kind of the name of the game when you’re in judged events,” she said.

“It was a really nice show nonetheless. It was a good experience, the horses drove phenomenally, and we’re really happy with them.”

Deer explained that in the last year, she has made a small but meaningful change to the way they dress the horses for competition. Whereas they used to braid three ribbons, two purple and one white, in the foretops (forehead hear) of the horses, they began swapping out one of the purple ribbons for an orange one.

“We started putting an orange ribbon in all of our horses’ foretops, it would have been last June, I believe, in remembrance of the residential school kids that didn’t return and to raise awareness for them as well,” she explained. “It’s become kind of a staple in our hitch.”

Ahead of the Grandview World Nights event, Deer and her crew have been getting their horses settled at the newly completed World Equestrian Center.

“It’s really, you could say, high-tech here,” Deer recounted, speaking by phone as she was setting up in the new location. “It’s all brand new and probably the best facility I’ve ever been to so far.”

Deer has nine horses with her and a crew to help out with all the horses – not to mention a few kids along for the ride and taking in the show. They use a 53-foot semi to transport the horses, cart and equipment when they travel for competitions. As Deer pointed out, theirs is by no means a small operation.

After this last of two shows on the trip, Deer and the horses will head back up to New York.

Normally, they just come down for one show. Having two shows with a few days between them means that Deer and the crew can also enjoy the warm Floridian weather.

“Because we’re in Florida, they make it nice for us to come here. Sort of like a vacation, but we still get to show as well,” she said.