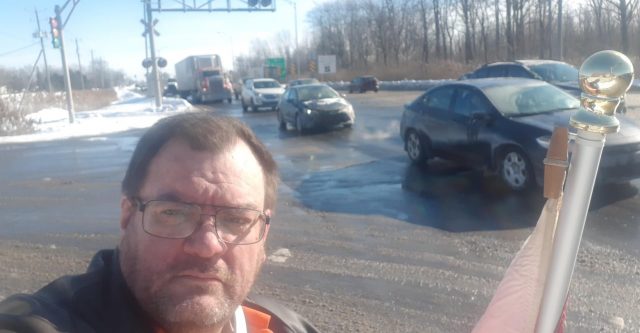 When Kahnawa’kehró:non Sean French heard that the Freedom Convoy would be passing through the territory on its way to Ottawa last Friday, he became very concerned because he knew that a small but vocal segment of the community was supporting the movement.

French said that he felt compelled to do something. That morning, he made his way to the Tim Hortons on Highway 132 where supporters had gathered and were flying Quebec, Canadian and American flags.

According to French, most of the supporters appeared to be non-locals, although he did recognize a few
people from town.

He said that the crowd was in a festive mood while they waited in the freezing cold. As traffic grew, he decided to make his move.

“I waited for an hour at the side of the (Highway) 132, waiting with my flag (the Warrior flag) clutched against the pole,” said French. “I think a lot of people assumed I was standing in support of the convoy, but I just kept waiting for a good moment to make a stand.

“I attempted to stop the convoy but was stopped by our Peacekeepers. In all fairness, they did their jobs and treated me with respect.”

Prior to the Peacekeeper intervention, the Kahnawa’kehró:non recounted that the first truck he identified pulled up at the lights with a line of trucks and supporters behind it.

“This gave the Peacekeepers a chance to intercept me and basically tell me they’d have no choice but to arrest me if I didn’t get off the road.”

So, French had no choice but to move back to the shoulder and stood there with the Warrior flag in one hand while he gave the middle finger to the convoy with the other.

“One of the main reasons that I wanted to go fly the flag there and oppose the truckers is because I knew there were a lot of people who were also flying the Warrior flag who support the truckers,” he said.

“And that flag means a lot to me. It always has, my whole life. Since I took part in the 90s all the way till now, it has meant a lot to me. And I do not want to be ashamed of our flag for it being associated with people like that.”

French is referring to some of the organizers of the freedom convoy who have known ties to far-right and white nationalist movements, including Patrick King and Jason LaFace, who are both associated with the group Canada Unity.

There are also Tamara Lich and B.J. Dichter, who organized the GoFundMe and are part of the separatist Maverick party.

“It’s the fact that they are going on about freedom. They are using all the right-wing buzzwords. They have the support of the right-wing members of the Conservative Party.

“One of the organizers is part of the Wexit Movement from Alberta, which are super right-wing and definitely not friends of Indigenous people,” said French.

However, not everybody shares French’s views about the convoy.

Community member Rusty Nolan said that he believes that the truckers are doing a good thing.

“Governments always overstep their boundaries, so it’s nice to see someone go against them. The mandates are illegal in my eyes,” said Nolan.

Initially, the convoy was formed to protest a federal vaccine mandate for cross-border drivers. But after thousands of protesters converged on Parliament Hill over the weekend, supporters shifted to opposing all COVID-19 health mandates.

It is also important to note that the US also imposed a vaccine mandate on cross-border truckers.

Still, Nolan said that he believes that the mandates infringe on his freedoms.

“The few racists or Nazi flag carriers are tagging along on the movement and should be arrested. They are being harassed by the truckers to get them to leave. It’s not part of the truckers’ views,” he said.

“But (Justin) Trudeau loves to paint brush whole groups of people, and that’s wrong. So yes, I agree with the truckers on this issue but probably not everything. I think it’s a good thing because it sparked protests all over the world. Freedom is always worth the fight.”

Constable Kyle Zachary, the public relations officer at the Peacekeepers, said that on Friday, at the last minute, a decision was made to re-route the convoy to the Champlain Bridge and away from the territory.

“We were present and prepared to escort the convoy through the community. We were not involved in the decision (to re-route the convoy),” said Zachary.

“The smaller vehicles that were following the trucks still passed through. There were people that had gathered at different locations along the 132. All of the vehicles passed without incident.”

The decision to re-route was made by the convoy’s organizers to facilitate traffic fluidity, according to Stephane Tremblay, a spokesperson for the Surete du Quebec.

For French, though, it is very clear where he stands on the matter of the freedom convoy and its movement. He said that he has no regrets about taking a stand for what he believes.

“Their core support comes from people who do not like us. And I do not want our people, our community, to be associated with this. And there are a bunch of people here that are very vocal, and they have tied themselves into this,” said French.

He also supports the 90 percent of truckers who are vaccinated and don’t agree with the convoy.

“No matter what side of the debate you are on, whether you are for or against vaccines mandates, we have to take a long hard look at things and make sure that the people we are supporting are actually people that support our struggles,” he said.

“These people are not for us. These are people that if we were blocking the road for land back issues, they would try and run us over.”

The Mohawk Council of Kahnawake declined to give a statement on the matter. However, other Indigenous groups released statements in opposition to the convoy, like the Algonquins of Pikwakanagan, the Algonquin Anishinabeg Nation Tribal Council and the Kitigan Zibi Anishinabeg on Wednesday and the Federation of Sovereign Indigenous Nations on Thursday.