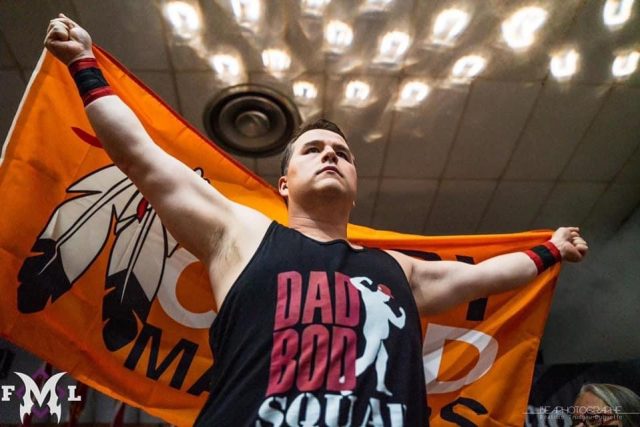 Kyle Zachary is getting ready to represent Kahnawake in a Canadian wrestling competition show later this year.

Wrestling Academy, created by the esteemed pro wrestler Jacques Rougeau, will pit candidates coming from anywhere coast-to-coast against each other for the chance to win $5,000 and a tryout at the US wrestling school Nightmare Factory.

“There’s a lot riding on this competition,” said Zachary. Not only does it provide the chance to visit a prominent hub of American wrestling, but it brings exposure to its contestants here at home too.

“It’s a dream come true for any contender, or any wrestler in Canada to make their way to a wrestling school in the United States to be seen by them,” said Rougeau.

Zachary said he loves wrestling because it blends two of his passions: acting and athleticism.

“When I first came back, it was more like I was just happy to be back and just happy to be performing,” he said. But the years are catching up to him, and the Wrestling Academy competition gives him the opportunity to really make a go of it.

“We don’t really age like wine, wrestlers. This is probably my last opportunity to make a real, meaningful impact in wrestling.”

One winner will be selected in each of the three categories: men, women and tag teams. Rougeau said that he is still adding contestants to the roster.

Rougeau can’t say for sure when exactly the competition will start, but he’s aiming for May. He’s working to get it broadcast on YouTube as a competitive show lasting 12 weeks so that it can be seen around the world.

Celebrity judges from various fields, including wrestling, of course, will aid in the decision-making of who stays and who goes home as the contestants are gradually whittled down until the winners are announced.

Zachary said he’s impressed by some of the big names in wrestling that have signed on to the project. But it won’t be up to the judges alone: viewers will also be able to weigh in.

“People are going to vote to see who keeps on going and who gets put out as the competition goes on,” said Rougeau.

He said he hopes Zachary finds support from his community to help him stay in the competition.

“Bottom line is people are going to be voting. You need to vote for Kyle Zachary, who’s coming from Kahnawake. He’s representing Kahnawake across Canada,” he said.

It was Rougeau that Zachary first trained with 20 years ago. “Everything good that happened to me in wrestling, it all started there. So I owe a lot to him,” said Zachary.

For now, all Zachary can do is practice his skills and try to contain his excitement – and drum up some support for when the competition begins.

“It is a very exciting time for me, and I’m hoping that the community will come along with me and enjoy the show,” he said.