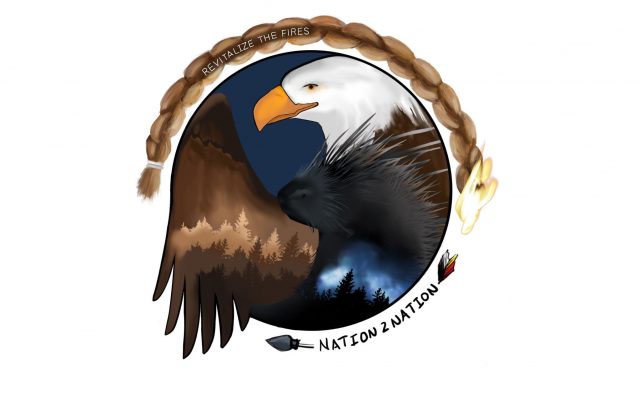 All aboard the caravan: final stop is Wet’suwet’en land.

In an act of support, a group of Onkwehón:we is setting out to lead a cross-nation journey from the Eastern Shore of Mi’kmaq territory, all the way to Wet’suwet’en lands on the West Coast.

“As Indigenous people, we have a duty to protect and conserve Mother Earth against all those that wish her harm, even if we (have to) stand-alone,” said Jessica-Lee (Samson) Dinovitzer, an organizer of the Nation2Nation initiative.

“It’s up to me and everyone who heard the call to action by the Wet’suwet’en people to go stand with them while thinking of the next seven generations.”

The 25-day journey expected to begin in March will be travelling from one Indigenous community to another on its route to northern BC, where land defenders are repeatedly facing violent raids and arrests by the RCMP.

Alongside encouraging others to join them in standing with the Wet’suwet’en Nation fighting against the encroachment of the Coastal GasLink (CGL) oil pipeline, Dinovitzer said the collective also aims to further foster discourse around shared plights faced by Onkwehón:we.

“As we travel across Turtle Island, we want to engage and learn from other Indigenous communities about the broken promises and ways (in which) the Canadian government is still falling short,” said the Kanehsata’kehró:non.

While Onkwehón:we are systematically met with arrest and violence when opposing environmental threats to their homelands, Nation2Nation organizer Al Harrington pointed to the stark contrast observed at the 2022 Freedom Convoy in Ottawa.

“The differences with this convoy is (especially) in the way police are helping – even embracing the truckers,” said the Kanesatake resident and father. “We see the police working alongside them and bringing them food while they’re not even in riot gear which is what we usually see them in at protests.”

The convoy that descended on Ottawa last weekend was characterized as an action in opposition to all COVID-19 mandates. However, it was also revealed that the convoy organizers were individuals with ties to white nationalist movements.

Denouncing the disparities in the treatment faced by Indigenous Peoples at the hands of police and political authorities is just as crucial to the message the Nation2Nation group is aiming to bring to light.

Surrounded by a strong police presence around the federal capital, Confederate and nazi flags, as well as other symbols of hate, were seen being displayed amid the sea of protesters gathered. As of Wednesday, February 2, police had reportedly made a total of three arrests.

“A lot of people – quite frankly, a lot of Canadians – are really blind to this,” added Harrington. “As a society in Canada, we still have long ways to go.”

To join the Wet’suwet’en Nation in their fight is also a way to honour those who stood up against armed military and police to protect the land sacred to two of his own children.

“I reside in Kanesatake, where I’m being told stories about the Oka Crisis (Siege of Kanehsatake) and the people from different nations who came to help defend it,” said Harrington, who is Ojibway from Iskatewizaagegan #39 Independent First Nation.

“I felt I needed to do something to honour the warriors who came here back in the day to help the community in their land fight.”

With donations still needed and additional details to sort out, Harrington said his group is in contact with land defenders who welcomed their willingness to support them in the continuing three-year-long saga to stop CGL in its plans to build an oil pipeline running through Wet’suwet’en territory.

Despite the Wet’suwet’en Nation’s hereditary chiefs refusal to allow the construction of TC Energy’s CGL pipeline, the company has claimed that it has unmatched support from Indigenous communities.

Rising against the injustices afflicting Wet’suwet’en people is a battle Dinovitzer is taking to heart.

“I hope that we will gather enough brothers and sisters and supporters along the way to really get people thinking about the next seven generations,” she said.

“Seven generations really is not that far away.”