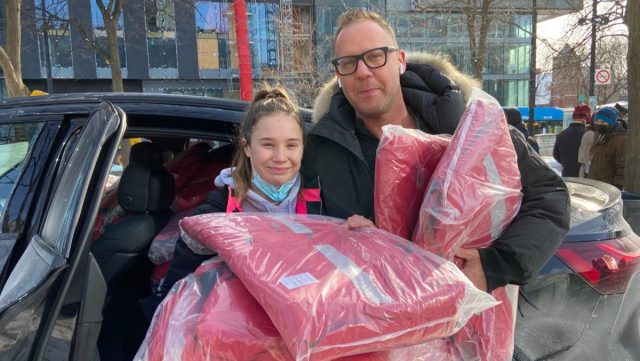 A father-daughter initiative is bringing some warmth to Montreal’s homeless population by donating hundreds of winter coats as freezing temperatures persist in the province.

Two weeks ago, McGill University student Victoria Kalisky, 23, was grocery shopping in -30 C, and even though she was bundled up, her cheeks burned because of the extreme cold.

“Then I saw five women and men who were going to be sleeping there all night. I was just imagining the physical pain of that,” said Kalisky.

“The next morning, there was a news article about a woman who was denied access to the metro because of the curfew, and she froze to death. I felt I needed to do something.”

That woman was 64-year-old Stella Stosik, who was found dead near the Berri-UQAM metro station. The news of her death made waves in the city as less than 10 days prior, a 74-year-old man named Michael passed away from hypothermia.

The young woman quickly sprung into action and asked her dad Lorne, who owns a liquidation business, if he could speak to one of his contacts to see if they were willing to help.

“The supplier agreed to provide us with the winter coats at a significantly discounted cost. These are coats that are regularly $300, and he has given them to us for $25 each,” she said.

Kalisky started a fundraising campaign through GoFundMe last Saturday, and within 24 hours, they raised $14,000. On the morning of January 23, the father-daughter duo was distributing parkas at Cabot Square.

Kalisky had gotten in touch with Nakuset, the executive director of the Native Women’s Shelter and co-manager of Resilience Montreal, who provided her with information on the homeless community in the city.

“She said she learned about what was going on in the media with the death of the homeless people lately, and she wanted to do something proactive,” said Nakuset.

“I got in touch with Alexandra (Ambroise). She went down and was the one who received a little over 200 coats. They were handed out immediately.”

Ambroise heads the Raphaël André Memorial Tent, where the coats were distributed. By January 25, Kalisky and her father had also made deliveries to Resilience Montreal, the Open Door shelter on Park Avenue and the Maison du Pere shelter for men. In total, they donated 681 winter jackets for adults, approximately 1,000 hats and 140 gloves as the money kept rolling in.

“And then today (January 25), we have acquired approximately 500 snowsuits for children that will be distributed on Wednesday,” said Kalisky.

“I think homelessness, in general, suffers from a collective action problem, and it is really important to channel the power of collective impact, and that is really what has happened here,” she said.

“So many people have stepped up to help us, and everyone’s small contribution is making a very big difference.”

Nakuset echoed the sentiment and said that initiatives like this one have a significant impact on populations at risk.

“Not being warm when it is bitterly cold is terrible. You risk your life. Not having adequate warm spaces – at least they can be a little bit more comfortable under the horrific circumstances. It’s incredibly helpful and life-saving,” she said.

And she believes that the message is catching on.

On the evening of January 24 at the warming tent, participants got a special dessert donated by Melanie Ambroise, an Innu woman from Uashat Mak Mani-Utenam.

“There is this woman who really wanted to support the people at the tent, and this was her way of doing it. She made and donated the rainbow-coloured Jell-O. It took her three days to prepare,” said the executive director.

Kalisky was extremely grateful and overwhelmed by the community support. Moreover, she explained that this was her first hands-on experience working with the homeless community and has profoundly affected her.

“We have been directly interacting with homeless men and women. I was amazed by the people. I think there are negative stereotypes around the homeless population. I was so impressed by the kindness and the sense of community among these people,” said Kalisky.

She stressed the importance of collective impact and reminded everyone that every small effort creates change.

“I think it is important that those who are safe and comfortable are helping those who are more vulnerable and have less support right now.”