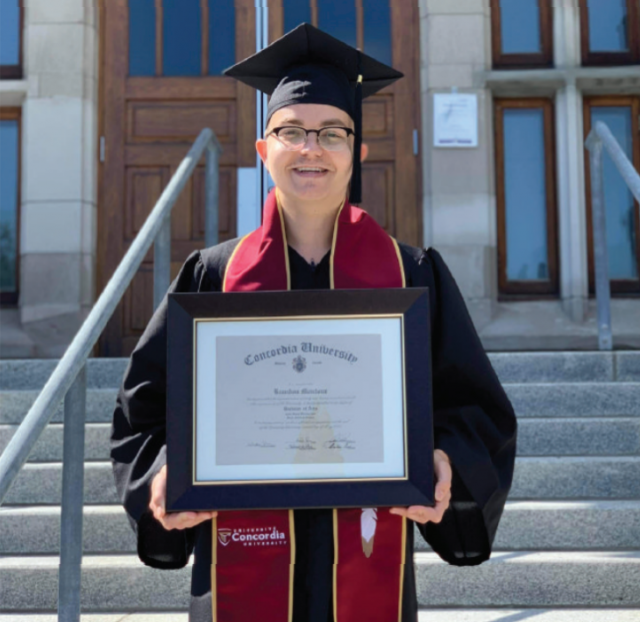 Whether it’s in the courtroom or on campus, Brandon Montour is committed to defending the rights of Indigenous people.

As the Kahnawa’kehró:non is completing his second year of law school at McGill University, Montour has also been busy advocating for Onkwehón:we interests in his role as co-president of the Indigenous Law Association/Association du Droit Autochtone (ILADA).

“Being the only student from Kahnawake in the program at the moment, I can find it difficult at times to find that sense of community and belonging,” said Montour. “This is part of why I wanted to be part of this association.”

The mandate of ILADA is to advocate for greater awareness of Indigenous legal traditions while also raising consciousness around topics that give support to relationships across Turtle Island – especially in matters related to the dynamics of the settler-colonial state.

“It’s about offering our advice and guidance to an institution that has not really had Indigenous voices being heard at the table,” emphasized Montour. “It’s important that the faculty engages with us, and we recognize that as something we’re proud of because at the end of the day, our goal is to be involved in more of these conversations.”

The association’s mission focuses on advocating at the faculty level, but it also serves as a way to help students gain crucial insights into the practice of Indigenous law, as well as concerns affecting Onkwehón:we.

Montour highlighted the significance of this work taking place in all spheres, including within ILADA itself.

“We thought it would be important to open the door to (non-Indigenous students) because it only helps to create greater awareness on campus,” he explained, adding that doing so also provides opportunities for future lawyers to learn about Canadian issues that they may otherwise not have been taught in school.

“Gaining this insight as part of the association will in return allow them to make greater demands, whether it be on campus, at the government level or elsewhere.”

While hopeful to see an improvement in future non-Native lawyers being more aware and active with Indigenous matters, Montour also recognized that the stakes remain different for students like himself.

“When you’re an Indigenous law student, these issues are affecting you directly, and so you’re personally invested in this – that really makes the difference,” said the Kahnawa’kehró:non. “Indigenous lawyers are truly needed because having more representation really makes a difference.”

As an example of this, Montour highlighted how meaningful it was for him to be involved in a successful settlement agreement related to safe drinking water in First Nations communities during his summer internship with leading national firm McCarthy Tétrault LLP.

On July 30, the Government of Canada agreed to settle the approximate $8 billion class-action litigation in which McCarthy Tétrault and Olthuis Kleer Townshend served as lead plaintiff counsel.

“It was an experience that showed me how the corporate world can actually be really beneficial,” said Montour.

With a dedication to representing Indigenous interests across the board, the ILADA co-president is reminded of the valuable work taking place at every level.