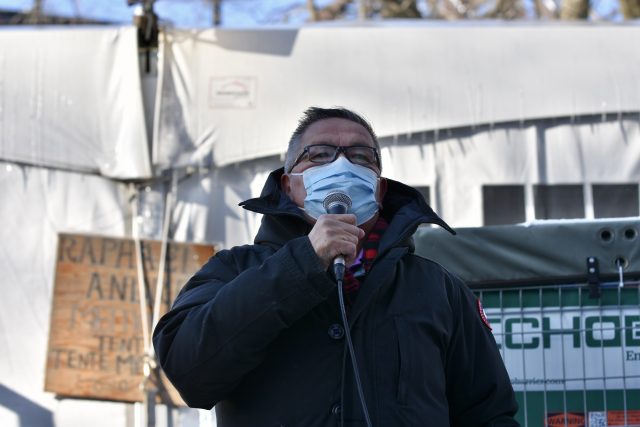 “Where are they warming up?”

Alexandra Ambroise asks herself this same question every night as she and the staff of the Raphaël André Memorial Tent greet sometimes upwards of hundreds of unhoused individuals seeking warmth.

“When it’s cold like today, I have fewer people waiting outside because there are so many who aren’t dressed properly enough to wait in the cold,” said the tent’s coordinator. “These people are used to coming here and they like being here – we can’t send them to the other side of the city.”

It was a sunny but bitter cold afternoon on Tuesday, January 18, when people gathered at downtown Montreal’s Cabot Square to honour the memory of Raphaël “Napa” André, an Innu man whose death sparked growing calls for action to protect Montreal’s homeless community.

On January 17, 2021, the 51-year-old from Matimekush-Lac John was found dead in a chemical toilet steps away from the Open Door drop-in centre he often frequented. At a time when a province-wide curfew was in effect, the shelter had been mandated to close its doors at 9:30 p.m. following a COVID-19 outbreak.

“Dying of the cold in an urban city like Montreal – there’s no reason why this would happen,” said the executive director at Resilience Montreal, David Chapman. “These are really unnecessary deaths and, as Raphaël’s parents pointed out, there’s no reason for there not to be a building to warm up in when in a city full of them.”

Unlike with a building, the idea of permanency has been a constant worry looming over all those implicated in the community-built tent initiative.

Even prior to its opening on February 2, 2021, the tent faced countless hurdles: from securing the necessary funding to obtaining permit extensions, all while grappling with the impacts of a global health crisis.

“Unfortunately, the tent behind me is often referred to as a band-aid solution while mega centres like Welcome Hall Mission or Old Brewery Mission might have the capacity, but they won’t necessarily always take as seriously emergency solutions,” expressed Chapman.

“It’s critical that localized solutions around the city are maintained and continue to unfold. Because if we fail at this point, more people will die.”

At the same time as the director appealed for increased efforts to localize services for unhoused individuals, he reiterated that this shouldn’t take away from the importance of finding long-term housing options.

This is a message the Native Women’s Shelter of Montreal executive director Nakuset sought to emphasize on Tuesday.

“We’re working with the Innu chiefs, the Mohawks and so many others – I know we can find a way to make this happen,” Nakuset told The Eastern Door.

Among the Kahnawa’kehró:non involved in the project is Mary Goodleaf who has contributed time, donations and a strong voice to the cause. As she continues participating in efforts to find a building, Goodleaf stressed the urgency of overcoming certain barriers.

“Our main struggle has been in finding a location where it’s not only safe, but also where the community will be welcoming in accepting an overnight shelter,” said Goodleaf. “We already have limited resources as it is and I can’t believe we keep running into this problem when it’s a matter of life or death right now.”

The seriousness of this reality has been increasingly brought to the forefront with the passing of Inuk elder Elisapee Pootoogook last November 22 and, most recently, after a 74-year-old man known as Michael was found to have died of hypothermia on January 11.

“It was shocking to hear that he froze to death,” said Raphaël’s cousin, Gloria André, at the memorial. “It’s hard to be out here and actually see your own people – your own family – struggling on the streets.”

The memorial tent which was initially intended to remain open for just two weeks has since welcomed 72,888 people up to January 16. With the required funding raised and another extension from the City of Montreal, the Raphaël André Memorial Tent will continue to run until March 31.

“We only have 15 places inside so when we say that there are more than 500 people who show up every night, it’s very alarming,” said Ambroise, who is in charge of running the tent.

“I have no words to describe the number of people we can receive per night, yet every day, I’m afraid to find out that another person has died in the cold.”