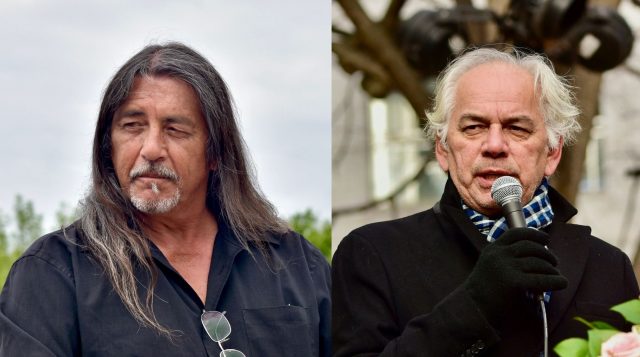 The word is out and hats have officially been tossed into the ring.

Less than two weeks ahead of the Assembly of First Nations Quebec-Labrador (AFNQL) election, Serge Otsi Simon announced he was joining the race against current regional chief Ghislain Picard.

“Running for this position was not an easy decision, it’s one that took me months to make,” said the former Mohawk Council of Kanesatake grand chief who held the position for a decade.

Since his loss against Victor Akwirente Bonspille in the council election on August 1, the candidate said he has been wrestling with ideas on how he could carry on with contributing to the betterment of Indigenous Peoples.

“In the past months I’ve been struggling with the direction I should be taking. But today, I feel as though I’m back in my element,” said Simon.

With 30 consecutive years of experience at the head of AFNQL, Picard embraced the notion that credit must be given to the electoral democratic process.

“I know the field quite well and I say that very humbly because over the years the leadership has changed quite a bit,” said Picard, who has been elected by acclamation six times and won four elections since 1992. “(This election,) I’m honoured that it was two women chiefs who nominated me.”

While applauding the work of Indigenous women for shattering glass ceilings, Picard underlined the importance of collaborative approaches in the position for which he seeks reelection.

“Women’s issues are already well represented by women’s leadership (and) their contribution in a more general way on all issues is invaluable,” he said. “The same principle must prevail for the youth of our communities who I’m also listening to.”

The regional chief also commended the spirit of joint efforts and solidarity sustained between communities despite the diversity that exists within nations.

Whereas differences sometimes need to be overcome, it’s the similarities in experiences shared by Onkwehón:we that Simon sees as an area he is best positioned to assist chiefs with.

“The difference between the present regional chief and myself is that I’ve been in governance of a community for 10 years,” said the Kanehsata’kehró:non. “Like I’ve already told other chiefs, I have the same scars as they do because I don’t hear it secondhand – I live it.”

Also recognizing the diversity of Indigenous communities across the province , Simon expressed a desire to take a regional approach to the First Nations advocacy work, while reaching a wider public.

“The interests of First Nations are different, so instead of squabbling at the AFN (Assembly of First Nations), let’s do it by region,” said the candidate. “I also believe we have to get out of our thinking of just fighting Canada or Quebec – there’s a different path that should be explored and I think this path is at the international level.”

This is a course of action Picard underlined the organization has taken in the past, including while collaborating with the AFNQL’s Council of Elected Women when asserting the grievances of Indigenous women at the United Nations in 2019.

“It’s clear that the international option is always there,” stated the incumbent regional chief, adding that the same approach was effectively used at the national level through actions of solidarity with the Wet’suwet’en Nation in 2020.

“What is happening in British Columbia could very well happen in Quebec,” said Picard. “We have a provincial election next October and I think it is time now to put forward the positions that we consider to be fundamental – particularly on the issue of territory.”

Both of the candidates have been outspoken about their position regarding the Coalition Avenir Québec (CAQ) government’s shortcomings in valuing and respecting Onkwehón:we interests throughout its mandate.

Under the guidance of Quebec premier François Legault, the administration’s refusal to acknowledge the existence of systemic racism, along with the perceived negative impacts of the pending Bill 96, which sets out to further protect the French language in the province, has stirred criticism from Picard and Simon alike.

“If the Quebec government won’t listen and chooses to stick to its position, then I think the option we have is to take our position to the general population,” said Picard, stating that the AFNQL gained significant support in recent years with this approach.

“If reelected, I will certainly focus a lot of energy on that front – that is without neglecting the federal aspect because we are after all in an uncertain political environment with a minority government.”

Aside from this mandate, Picard reiterated his commitment to help First Nations pursue economic opportunities, as well as his intention to instate tangible and drastic measures to address the disproportionate number of unhoused Indigenous people in urban settings.

“We are called to act on a human basis like never before and right now we have communities that are very vulnerable to the pandemic – we need to continue to demonstrate these positions at every government level,” he added.

Meanwhile, if elected by the chiefs of the 43 First Nation AFNQL members, Simon said he was adamant that the issue of addressing Quebec’s nationhood would be the first item on his agenda as regional chief.

“If nationhood is declared and sought at the United Nations, then it should be known that there are treaties in Quebec with the First Nations people,” he said. “The world needs to know that Quebec and Canada are failing First Nations.”

The final date for eligible applicants to submit their candidacy for the regional chief position was January 11.

While an official confirmation awaits, the election that was set to take place in Wendake on January 25 will most likely be moved virtually due to COVID-19 restrictions.