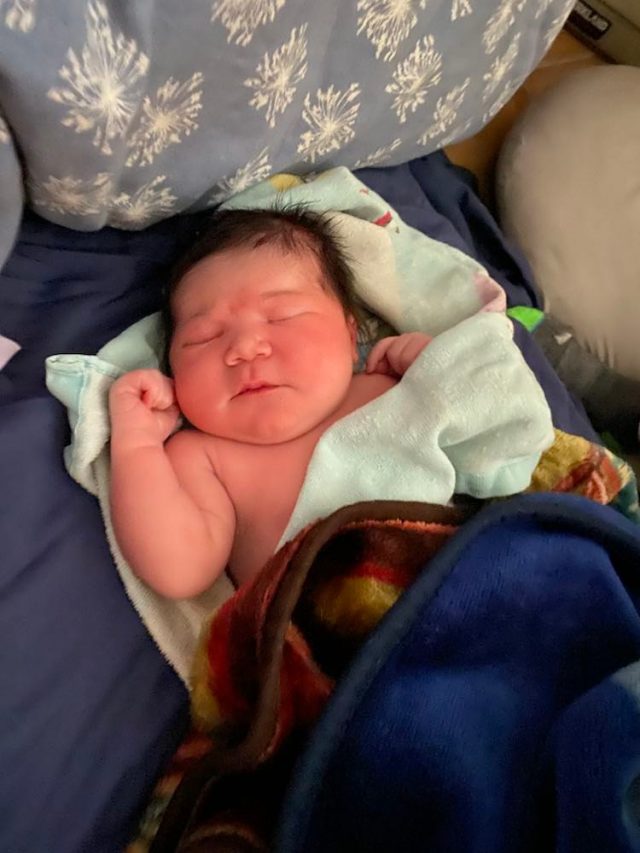 Her due date was December 24, which came and went without a peep. Mother Jenny Lahache was left feeling like she was in labour for two straight weeks – until the morning of January 1, when Ietsirénhawe decided it was time to be born.

They called their midwife, Catherine Mason, to let her know they were coming. Lahache’s partner Eric Lindquist got their four children into the car so that he could drive them all to the birthing centre and look after them as Lahache gave birth.

“That all flopped. I didn’t even make it in the car,” said Lahache.

Her contractions had quickly become too intense for her to be able to walk. There was no way she would make it to the car, much less to the birthing centre in Pointe-Claire.

So the plans changed. Lindquist gave Mason the home address, and she drove over to meet them. Their 10-year-old daughter got neighbour Oronhienhá:wi Barnes to help out. They also called an ambulance in case there was a complication.

“I ended up just being in the bath tub to soothe all the pressure of labour, and then all of a sudden I was pushing,” Lahache recounted. “I started to push, and literally two minutes later, she was out.”

Despite her initial tardiness, Ietsirénhawe wasted no time getting here when she was finally ready. Before the hour was up, Lahache gave birth to the healthy baby girl at home in the tub. She weighed nine lbs, 12 oz. Lindquist helped catch her.

“Eric was like a pro. Like you’d think he taught the class on how to deliver a baby emergency-style,” she laughed. “My neighbour, my daughter and him team-worked it to the max and just threw blankets on us, and then we waited.”

Mason arrived 10 minutes later to find the mother and baby both in good shape, if a bit stunned by the sudden turn of events. She helped Lahache deliver the placenta, then Iakotste’niá:ron Deer cut the cord and set her up on a makeshift bed in the kitchen. They cancelled the ambulance as it was clear the baby was doing well and didn’t need oxygen.

Due to COVID-19 restrictions, midwives in the Montreal region have not been able to do home births since December 28. Mason said that though planned home births are off the table for now, in this exceptional situation, it made more sense to go over and make sure everything was okay than have Lahache travel to the hospital with her newborn.

“Generally, when it goes fast like that, it’s because everything is lined up for the baby to come, and the body just knows exactly what to do,” she said. “It’s rare that we have complications when a baby comes out quickly.”

Because of this, Mason said it’s a good thing Lahache didn’t get into the car and try to make it to the birthing centre.

“It’s always better for a woman to deliver at home rather than delivering in her car on the side of the highway,” she pointed out. And given that pandemic restrictions limit how many people can be in the room with a woman when she is giving birth to just one, the unplanned home birth had a silver lining: Lahache was able to have both Lindquist and their daughter with her as she delivered.

“I was very touched by it,” said Mason. “We couldn’t have planned a better birth, with all the family around and for it to go so smoothly.”

Barnes, the neighbour who came over to help, agreed that it was a powerful experience. She said she was grateful to witness Ietsirénhawe coming into the world and how Lahache, Lindquist and their daughter got to share the moment.

“Jenny did really amazing,” she said. “It was a very beautiful experience that I’m extremely honoured to have been a part of.”

She also noted how special the timing felt on the first day of the year.

Lahache said that in the moment, she wasn’t nervous or scared. She was just happy to have her people around to help her.

“I just felt a lot of trust in everybody around me that they’re going to do the max, so I just let myself birth. I didn’t hold back anything.”

“My 10-year old is like a little doula; she was so much help with the delivery,” she continued. “Everything happened in a good way. Everybody had a solid place.”

Note: This article was updated to clarify who cut the umbilical cord. The Eastern Door regrets the previous omission.