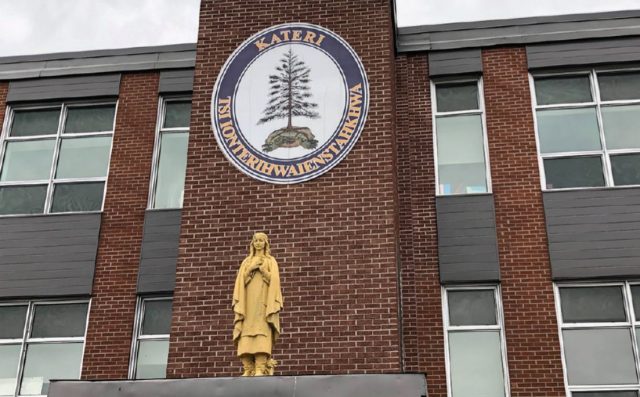 A four-month investigation into sexual abuse allegations against an employee at Kateri School has led to the former educator’s termination, The Eastern Door has learned.

The names of all of the people involved are being kept private for fear of identifying the victim, who was a minor when the alleged abuse occurred.

Although charges have not been officially filed in court, a file is open with the Peacekeepers.

“This highly sensitive matter is a Human Resources issue; therefore, we cannot disclose any information concerning the names or status of affected employees. However, we would like to reassure our parents that the Kahnawà:ke Education Center has and remains committed to ensuring the safety and wellbeing
of our students and staff,” the release continued.

The Eastern Door was able to obtain information about the independent investigation, which was
done by Relais Expert-Conseil’s Janie L’Ecuyer, and which has not been released to the family.

The alleged victim’s family has been taking the news hard, and even though it means the former educator has been removed from the school, it does nothing to eliminate their pain and suffering.

They chose not to comment directly on the most recent findings, however in a previous interview in September, when The Eastern Door broke the story, the mother of the alleged victim we called Sam opened up about the effects on her son.

“It’s had a huge impact on him. He’s been robbed of his childhood,” she said. “I trusted this teacher. I thought he was a good teacher who really showed interest in the kids. I feel lied to and stupid for not seeing through his fake exterior. A teacher is a trusted profession; we trust them with our most precious possession, and to me, what he did to my kid is unforgivable and disgusting,” she said.

Sam previously opened up about his story as part of his healing, but also to raise awareness of sexual abuse in Kahnawake and to get others to open up and come forward.

“I want others to come forward and tell their story with me,” he said. “I want you to know you are not alone. I know for sure I am not alone.

“I hope this small piece of my story reaches you and you say something. We were hurt by the same man, and that’s not okay. It’s hard to come forward, but trust me, you will feel good that you did,” said Sam.

When the alleged abuse was being investigated by The Eastern Door, the KEC would not publicly confirm that an investigation was, in fact, taking place, but on Friday, September 24, the day the paper came out, the Education Center, along with Kahnawake Shakotiia’takehnhas Community Services (KSCS) put out a press release to address it:

“The Kahnawà:ke Education Center along with the Kahnawà:ke Combined Schools Committee is aware of serious sexual allegations made against an employee. Our hearts are heavy for everyone affected by this situation,” the September 24 release reads.

“Both the Kahnawà:ke Education Center and Kahnawà:ke Combined Schools Committee are bound by confidentiality on matters of this nature; however, this does not limit us from relaying to parents that this allegation will remain our utmost priority. Our response to this disturbing information is timely and appropriate and will remain internal at this time. We must respect the privacy and anonymity of all those
involved throughout this process.

“The safety of your child(ren) will always remain our priority,” the release concluded, while ending with support numbers to call.

The press release put out Monday offered support but was also bound by confidentiality:

“Moving forward, the Kahnawà:ke Education Center will continue to collaborate with Kahnawake Shakotiia’takehnhas Community Services, as well as other external support resources, to deliver programming and increase awareness of students and staff on matters of student safety and prevention,” the December 13 KEC release continued.

“At this time, we will be providing no further information in order to respect the privacy of all involved and their families. We ask the community to respect the wishes of those affected and follow suit. We encourage those impacted by this announcement to seek support.”

It ended with important information for those who need help and are or were sexually abused.