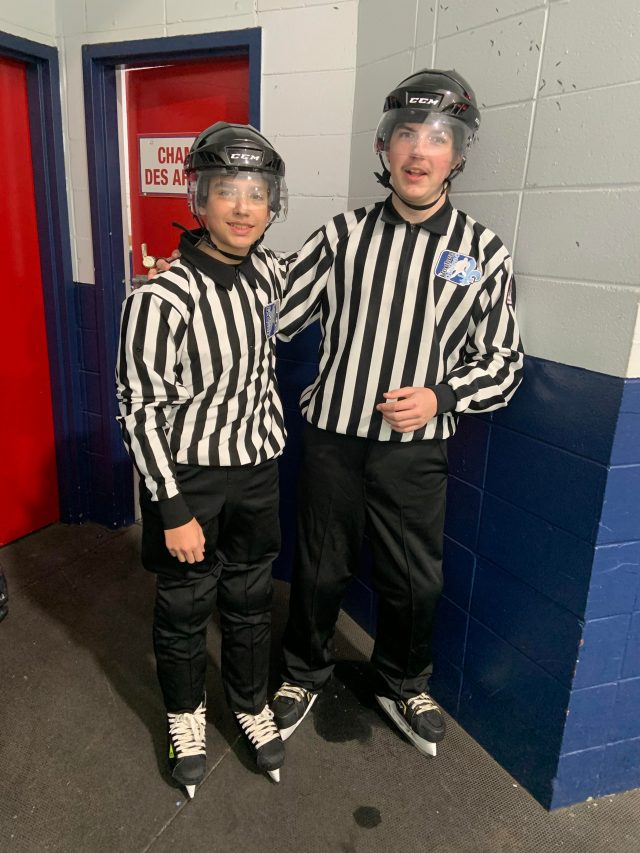 Adam Dailleboust and Matthew Stacey are just 14 and 15 years old, but that’s old enough to be calling the shots in minor hockey.

The two teens have been working as referees in the Suroit Zone, encompassing Kahnawake, Chateauguay, Mercier and Ste. Martine. They referee for different age groups, going all the way up to Bantam.

“It’s pretty fun,” said Dailleboust about his job. “I socialize a lot and talk, and I get to do a job that I like, and that pretty much is all about hockey.”

Dailleboust has played hockey for 10 years. He started refereeing in garage leagues over two years ago
with the help of his father, so though this is his first official job as a referee, he does have some prior experience.

“You get paid to be on the ice,” said Stacey. “I really see no reason why you shouldn’t be a referee.”

This is Stacey’s second season refereeing. He got into it in no small part because he and his mom would often comment about the poor refereeing at his hockey games when he was a player.

“These are two keeners like we say, and I enjoy working with two keen kids that listen,” said head referee Bob Hurtubise.

Hurtubise said they have about five or six father-son teams where both are or were referees, like him and his son, and Dailleboust and his father Shooter.

“Those kids have got an advantage. They can have the advantage of talking about refereeing at supper and to and from games,” he said.

Hurtubise praised Dailleboust and Stacey for their work as referees, and the commitment of their parents, too.

“These are two great kids with great attitudes with parents that are behind them,” he said. “It’s nice to see that they’re well surrounded at home.”

Dailleboust said that as a referee, sometimes he makes decisions that cause some controversy. Players will be unhappy that they have received a penalty, and sometimes coaches disagree with calls the referees make, and they make their disapproval known.

“It’s mostly issues with coaches, but I just ignore them and continue,” said Dailleboust. “It’s not really affecting me.”

For Stacey, his frustrations tend to be mostly with the fans, but occasionally with the coaches as well. He said that he enjoys his job when no one yells at him – when someone over twice his age is yelling at him because of a call he made, he said, “it can get pretty miserable.”

“As soon as we put our arm up for a penalty, you have 50 percent of the rink that agrees with you, and the other 50 percent doesn’t,” said Hurtubise.

He explained that he tries to pair up the younger referees with more seasoned ones who can help smooth out the disagreements. Coaches, players, and their fans can get very invested in the games, which can be intimidating for young referees.

“You’d be surprised how many incidents we have with angry coaches yelling at 13 or 14-year-old kids. It happens every weekend.”

But the job has its benefits that extend out of the rink. Hurtubise said that being a referee teaches youth discipline, which is a useful quality to have in all aspects of life.

“That’s what a referee is; they have to be there half an hour before the game. They’re not allowed to show up in jeans and running shoes. Their laces have to be clean. If they make a mistake in the rules, they get fined,” he said. “That’s what refereeing is all about, and these kids were able to adjust to that very well.”

“It’s tough to get the girls out there,” he said, but those who do get into the job find that there’s a higher demand than for male referees. “Girls have great and more opportunities to climb that ladder even quicker.”

Dailleboust encourages others in the community to get into refereeing. He said that there might be times when it gets tough being the person who makes the calls that will invariably anger half the arena, but referees can’t let it get to them.

“You just have to ignore them; you always got to get better at what you do. You can always improve.”

As for Stacey, he has a message for fans: “Stop yelling, please.”