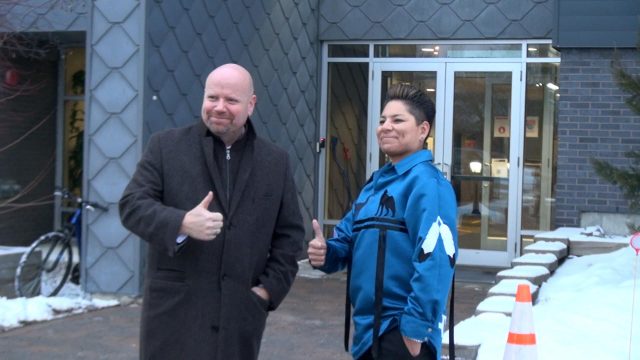 December 10 wasn’t the first time Quebec’s minister responsible for Indigenous Affairs, Ian Lafrenière, came to Kahnawake, but it was his first tour of the community.

He had a particularly qualified guide in Mohawk Council of Kahnawake grand chief Kahsennenhawe Sky-Deer.

At least one of the stops might have been missed by a regular tourist, however. Sky-Deer led them underneath the Mercier Bridge, a vantage point from which to highlight the lack of consultation when it
comes to Kahnawake’s jurisdiction.

They also discussed the occupation at the end of Old Chateauguay Road and other land grievances.

“I thought it was important for him to see things from our perspective, some of the lived experiences we’ve had with all of the different land expropriations, and how we’re kind of locked in,” she said.

Lafrenière and Sky-Deer discussed several issues, but at the centre of it all was a nation-to-nation relationship framework that is still not settled.

The framework was supposed to be tied up by October, with a meeting between the grand chief and Quebec’s premier, François Legault, to follow in November. This has also not yet happened.

There has been no meeting between the premier and anybody from Kahnawake since the Coalition Avenir Quebec (CAQ) was elected in 2018, according to Sky-Deer.

“Part of my ask was, is there real political will in terms of building this relationship and wanting to think outside the box, do things differently?” said the grand chief. “Hopefully we’ll see that come to fruition early in the new year.”

Despite concerns that some in the background on Quebec’s side may be resistant to change – not to mention the potential disruption of a looming Quebec election – Sky-Deer is still optimistic.

“Any sort of positive movement to me is a win, and we’ve just got to keep moving forward.”

Lafrenière was not the only representative of Quebec at the meeting. Chateauguay’s member of the National Assembly, MarieChantal Chassé, joined the pair for the tour.

They visited the Kanien’kehá:ka Onkwawén:na Raotitióhkwa Language and Cultural Center (KOR) at its temporary home in the Kahnawake Office Complex.

Sky-Deer emphasized the importance of the centre and the need for a new building.

MCK has applied for governmental assistance to help pay for a new multi-purpose cultural hub that would house the KOR.

“It was a very positive meeting,” said Lafrenière in a statement.

“It was a great opportunity to see and better understand the challenges the community faces, like the Mercier Bridge, for example, and the importance that we find solutions together.”

He added that the two discussed priorities for relaunching a nation-to-nation relationship on a new base.

“I would like to thank grand chief Sky-Deer for her warm welcome in the community,” he said.

Chassé also had a positive experience in Kahnawake. She expressed personal admiration for the grand chief and had been eager to meet with her.

“I didn’t want to miss that chance,” said Chassé, adding that she left with even more enthusiasm for the community than when she arrived.

“I appreciate he makes the commitment and the time to come and meet face to face,” said Sky-Deer of the meeting with the minister.

“I think it’s really important that we continue building in this direction and that he understands the complexity of Kahnawake and the needs that we have, and that we’re very unique, and hence the principles we have because of our lived experience.

“The tour really helped open his eyes to that.”